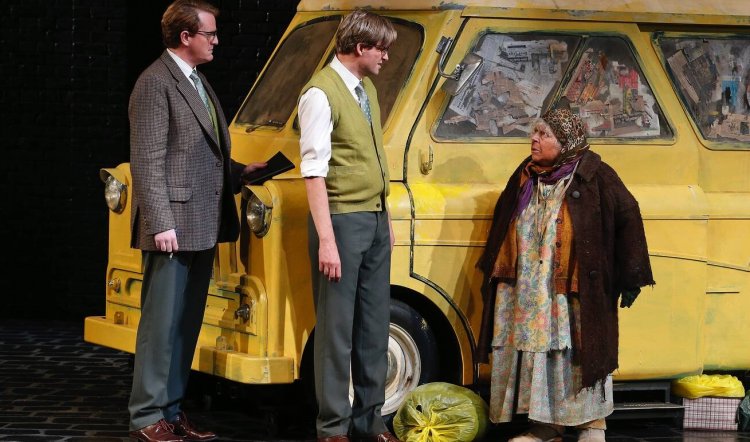 THE LADY IN THE VAN - MELBOURNE

THE LADY IN THE VAN, Melbourne Theatre Company at the Playhouse, Arts Centre Melbourne, until 9 March 2019. Photography by Jeff Busby: above and below - James Millar, Miriam Margolyes and Daniel Frederiksen

In case you don’t know, “The Lady” of the title is Miss Shepherd, a mysterious semi-vagrant who parked her old Bedford van in the street and then the front garden of a north London home. Fortuitously for her the owner of the house was Alan Bennett, the writer who charmingly if passively-aggressively put up with his squatter for what turned out to be 15 years.

Bennett did of course write about her and it was turned into the famous Maggie Smith film of 2015 which launched the cantankerous old boot (both Shepherd and Smith) internationally and, you’d think, indelibly. But that’s reckoning without the casting in this production of Miriam Margolyes.

The show sold out pretty much the day it was announced that Margolyes would be playing Miss Shepherd. Since then images of the fabled actor, posed perkily in filthy duds, in front of a white-fronted Camden Town semi with her van and a paintbrush laden with yellow paint, has been seen all over Melbourne and across the internet: so now she is The Lady. Take that, Dame Maggie.

So far so good. The play is a tricky one the first being that it’s static – the van didn’t move for one and a half decades. The second is that it’s written with two actors – James Millar and Daniel Frederiksen – as Bennett the playwright and Bennett the character. This added theatricality means conversations about Miss Shepherd and discussions about what to do, or not, can be held without further characters intruding. Also on the plus side, the device lends an unexpected three-dimensional quality to Bennett’s real-life tendency to deadpan flatness. 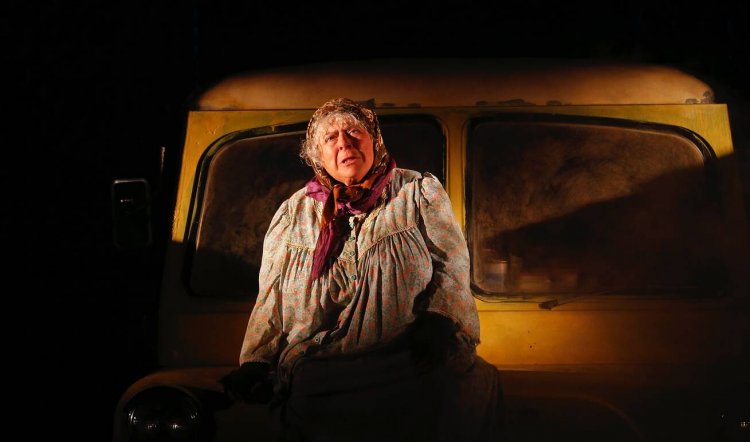 So far so good, again: as millions know, Margolyes is an astonishing stage presence, rarely less than brilliant and always riveting. With Millar and Frederiksen for company, she’s blessed with team mates who go with her all the way. They are laconically and constantly on point as the bewildered and increasingly exasperated writer. The interactions between them are a delight.

However, although the play’s human centre holds, this is despite a set design (Alicia Clements) and direction (Dean Bryant) so ill-conceived they defy understanding. Everything about it works (hard) against the actors, with remotely-operated platforms bearing walls, front doors, armchairs, other actors, bicycles and garden fences trundling on and off stage with robotic certainty and pointlessness. And the van is a malevolent beast whose movement and doors are clearly destined to stuff up at any opportunity.

Not surprisingly, the actors are all able to walk and talk and act simultaneously and well, but they’re largely deprived of this basic ability by being forced to occupy or catch a platform in passing throughout the show. It plays havoc with timing and conversations and the small moments of humanity on which the script and performances rely. That the principals largely achieve considerable emotional success is a credit to them and nothing to do with the nonsense going on all around.

That aside, the set (with pretty, puzzlingly romantic lighting by Matt Scott) also works against the script. The location – a rapidly gentrifying London street where the two-storey semis are white painted and set back from the pavements – is here turned into a darkly cavernous nowhere backed by a high black (!) brick wall. For maximum distraction and futility, on a couple of occasions along the top of the wall stutter crude miniature versions of the Bedford, and later, a Reliant Robin three-wheeler. 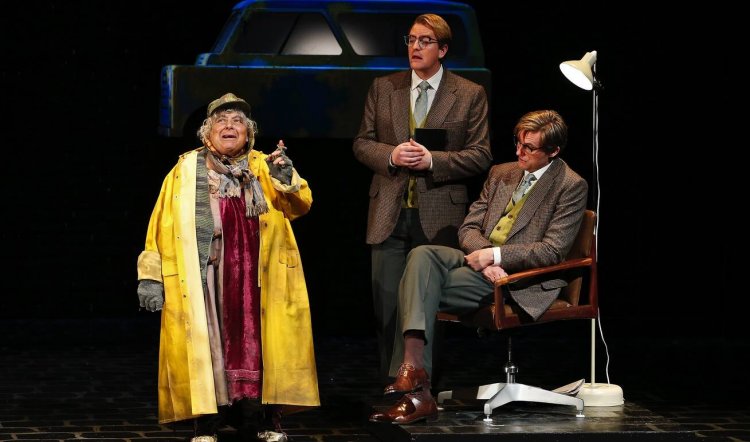 At a couple of points Bennett (Millar) is writing in his notebook about the events on a sunny spring morning which, unaccountably in this staging occur in midnight darkness. Similarly, Bennett (Frederiksen) is supervising the placing of the van in his front garden one sunny morning and not only is it dark, but the vehicle’s headlights are on.

The disconnect between the play and the “creative” element of this production is more a yawning chasm. Worse still, the money spent and wasted on it could keep a medium-sized independent company running for a year. The foregone conclusion of its box office success is just plain irritating.

Nevertheless, the principals somehow overcome most of the obstacles to give a chucklesome and finally – through the interplay between Margolyes and Millar in particular – an intriguing, touching and sadder play than one recalls. As well as eccentric drollery, The Lady In The Van explores the pain of loneliness and unacknowledged mental illness, and the balance achieved by Margolyes between comedy and pathos is very fine. Five star performances, but...