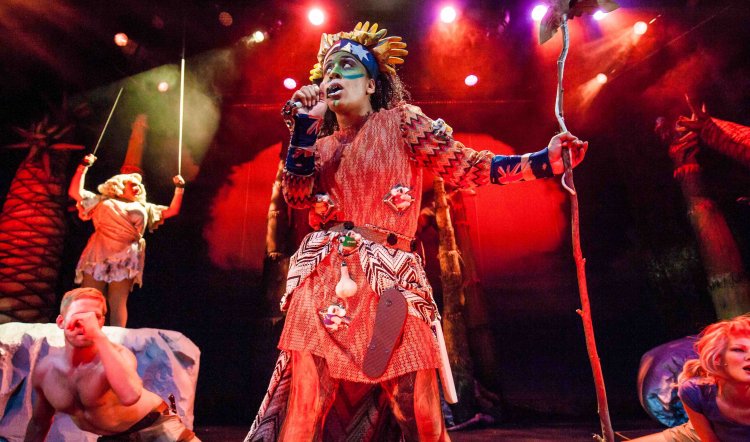 Six years in the making, even James Cameron would be humbled by what Trevor Ashley has…um…conceived, together with co-writer and performer Phil Scott and an outstanding company, with Elenoa Rokobaro, Shannon Dooley and Brendan Irving on stage via Cameron Mitchell’s choreography, Angela White’s costumes and lighting design by Gavan Swift to make the most of the giant vegetation, carnivorous dinosaur and gigantic schlong that ensure no vulgar inflatable will be left behind.

The setting is a mysterious island somewhere off Maroochydore where eccentric billionaire Dr Richard Rabbitborough (Phil Scott) has built an even more mysterious theme park. By waving $10k under the needy nose of Faye Wray – from Home and Away (Trevor Ashley), the hirsute billionaire persuades them to come home from Hollywood to be the celebrity face of Thoracic Park. 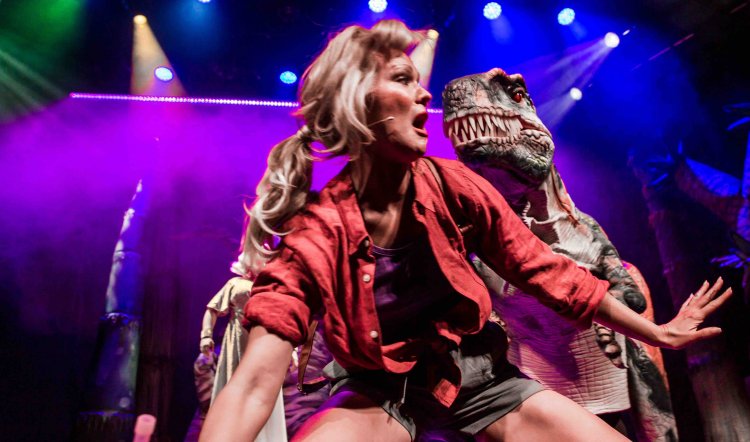 Dr Rabbitborough has also invited to the island a renowned Norwegian adventurer and explorer, Harrison Fjord, (Brendan Irving), and a world-famous plant biologist and spunk (Shannon Dooley) to take part in the exciting work that will enhance humanity and bring world peace – or something like that. Of course, they should all have been smart enough to remember that if something seems too good to be true, it’s because it is.

Lovers of disaster movies and mega-musicals will adore The Lyin’ Queen, as will anyone who fondly remembers such comedy geniuses as Morecambe and Wise or the Goons. It’s also only a few strands of DNA away from an end-of-the-pier pantomime – with a dame, a mad villain, a long-legged principal “boy” and a Buttons character who unaccountably does that hanging-from-the-rafters “Cirque du fuckin’ Soleil stuff” – to quote an exasperated Faye Wray. 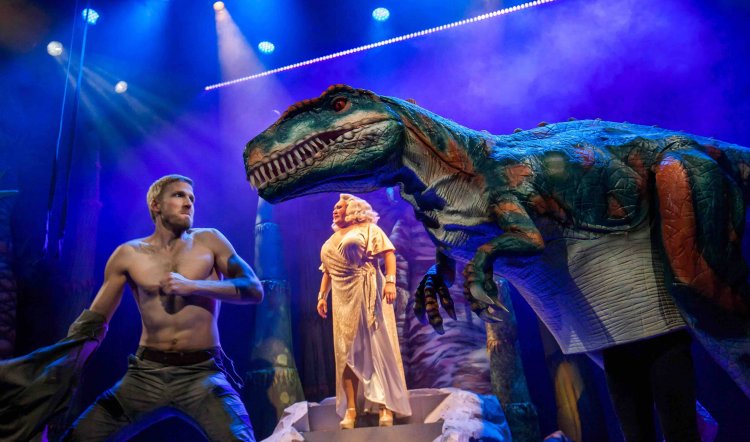 The Lyin’ Queen is wondrously clever and a joyous laugh a minute. (Except for the couple sitting in front of me: didn’t once crack a smile, didn’t clap, definitely didn’t join the standing ovation, then walked out as po-faced as Easter Island statues.)

It looks marvellous – the repurposing of yellow washing up gloves as a traditional Indigenous fascinator is a stroke of genius for instance – and rarely has giant asparagus been used so effectively to create a prehistoric jungle.  And you can be reassured that no CGI or hi-tech FX were used or harmed in the creation of the island and its mutant monsters. It sounds marvellous: music tracks by Andrew Worboys and Jack Earle and, oh my god, can that Rokobaro sing! And of course, each performer on stage is a virtuoso in their own right.

It can be said confidently and without a doubt that The Lyin’ Queen is the silliest , rudest and most sublime show to arrive in Sydney this year. Just when you think yet again, “They can’t say that can they?” They do! As Derek and Clive once said: “Laugh? I almost died – haven't laughed so much since Grandma caught her left tit in the mangle.” I adored it.