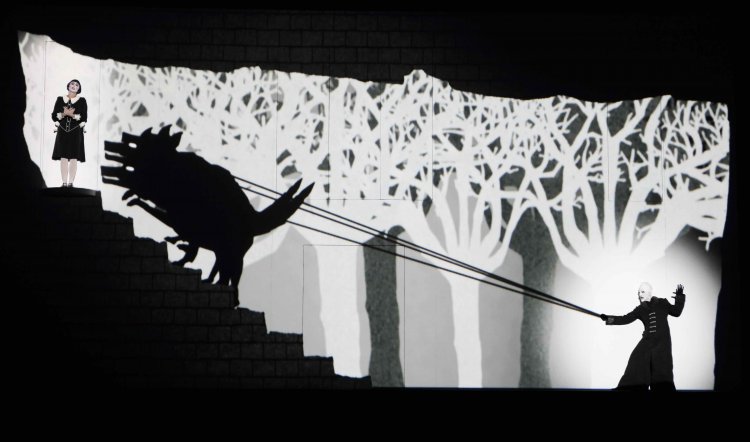 Fifteen years ago Julie Taymor provoked conniptions for the Metropolitan Opera when she sliced and diced The Magic Flute and introduced on-stage phantasms. How times change.

In 2012, Komische Oper Berlin opened a new Flute by its boss Barrie Kosky with Suzanne Andrade and Paul Barritt of UK company 1927. They collaborated to produce a show that was greeted with delight and has been on the road ever since.

According to Adelaide Festival (for which it’s the typically hot opening event) this Flute has played to half a million people in more than 25 cities around the world. And for Adelaide, it’s been a triumph even before the curtain went up.

The day before it opened, Festival directors Rachel Healy and Neil Armfield reported that – in a line-up which includes 10 world premieres, 17 Australian premieres and 23 events exclusive to the city – box office is ahead 22% on 2018 and 51k tickets have been sold across the event, for a cool $4,253,538. And – of particular interest to Sydney and its increasingly parochial fest – 24% of tickets went to interstate visitors.

What do these numbers have to do with art in general and opera in particular? A lot: 40 shows in a Spiegeltent don’t make a Festival or a reputation and eventually, government bean counters and other purse-string holders will catch on. Meanwhile, Adelaide is achieving popular and critical success – up against the massive Fringe, a car race and Womadelaide! 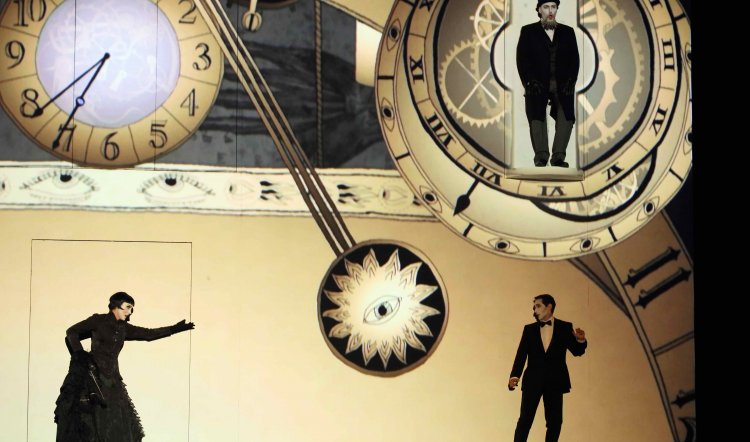 Barrie Kosky famously pronounced himself “bored shitless” by his early experience of a Flute – not surprising, really. In its normal form, it goes on and on about not much, plotwise; there is a lot of explanatory blether between characters and its exquisite music and lightness of being can be lost. Not so this production: recitative is condensed into silent movie title cards. This has the effect of highlighting the music and simplifying a convoluted and ridiculous storyline.

The influences on the creators are evident from the opening moments as Paul Barritt’s breathtaking hand-drawn animations fill the blank white stage/screen with the vivid, clashing colours and misshapen creatures of German Expressionism and the merciless beauty of Weimar. Season it with the B&W of early cinema – the mechanistic dehumanising of Fritz Lang’s Metropolis, for instance, and drop in Monostatos the villain (Emil Lawecki) as FW Murnau’s Nosferatu the Vampyr. Comically, the chatterbox birdcatcher Papageno (Tom Erik Lie) is visually at least the silent Buster Keaton, while his love interest Papagena (Talya Lieberman) is a voluptuous, bustier-and-fishnets Mae West.

Princely hero Tamino (Aaron Blake) is a Richard Barthelmess-matinee idol, while his flute is a tiny, animated darting Tinkerbell who trails musical notes instead of fairy dust; and his coup de foudre, Pamina (Kim-Lilian Strebel) is a dead ringer for Louise Brooks. This is a blessing for her as her mother the Queen of the Night (Aleksandra Olczyk) is, aside from her human head, an animated, gigantic spider. And so on...

Overseeing the misadventures of Tamino and Papageno, Sarastro (Andreas Bauer Kanabas) is a stately gent in a stove pipe hat and Abe Lincoln mien. He hands out trials and tests, he is unsuccessfully attacked by the Queen of the Night, his turncoat slave Monostatos and the trio of Three Ladies (Mirka Wagner, Maria Fiselier and Nadine Weissmann) who harmonise like fallen angels and dish out punishments as they see fit. (Has it been mentioned that the plot is convoluted and ridiculous?)

In all the nonsense, back in 1791, Mozart and librettist Emanuel Schikaneder attempted to leaven the knockabout fantasy with more serious symbolism – the Enlightenment and Freemasonry – and these elements are all present here, if one keeps one’s wits to hand. 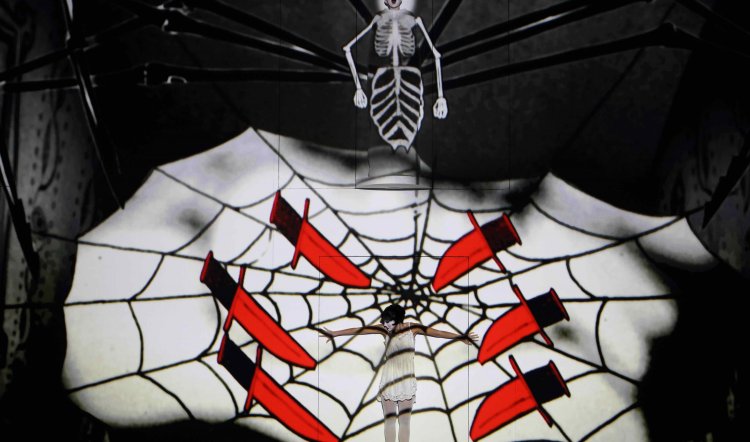 Yet it’s the originality and wit of the integrated animation/people that dazzle and entertain: Monostatos is dragged about by a pack of ravening black dogs. Similarly, a black cat torments the dogs and has fun at Papageno’s expense; his birds are owls that develop human legs, and both he and Tamino are fleetingly tormented by vagina dentata-style mouths full of teeth. When he gets drunk it’s not wine but pink gin which produces flying pink elephants...

Recently, in Sydney, Opera Australia staged Wozzeck, famously directed and designed/animated by William Kentridge. Although lauded by the majority, for some, the filmed and projected animation entirely swamped the singers – who literally disappeared into the visuals. The self indulgence of a single vision, perhaps.

This doesn’t happen with The Magic Flute because of the triumvirate of creative minds as well as set and costume designer Esther Bialas. Instead, we are treated to a spectacular amalgamation of humans, visual magic and imagination, and sublime music (conductor Jordan De Souza and the Adelaide Symphony Orchestra).

The soloists are without a weak link. In particular, the bass Sarastro is gloriously and surely sung by Andreas Bauer Kanabas, while coloratura high F queen (of the Night) Aleksandra Olczyk is simply thrilling. The Three Ladies are exemplary and the boy sopranos (from the Tolzer Knabenchor) are divine.

This Magic Flute is crazy, beautiful, simple, dazzling, clever and gloriously satisfying. Not to be missed.