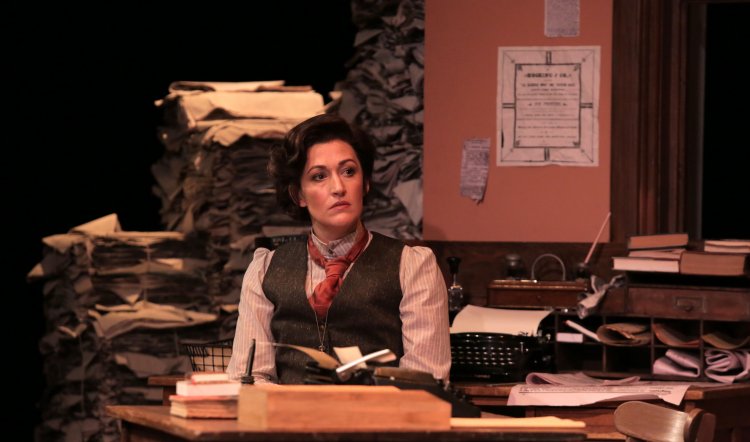 THE TORRENTS, Sydney Theatre Company at the Drama Theatre, Sydney Opera House, 18 July-24 August 2019. Photography by Philip Gostelow: above - Celia Pacquola; below – the staff and friends

It has been impossible to escape the hype surrounding the coming to a Sydney main stage of Celia Pacquola – the celebrated TV actor, writer and stand-up star has been smiling from taxibacks, buses and posters for months – and the resurrection of the “rarely seen Aussie classic” by Oriel Gray.

Pacquola is best known to audiences for Rosehaven, the quietly clever comedy from ABC TV. Ironically, that same audience – the older element anyway – could well have seen Gray’s main body of work in early TV drama and serials, notably Bellbird.

Most famously, however, The Torrents was co-winner in 1955, with The Summer of the Seventeenth Doll, of the then main playwriting award. And, the story indignantly goes, the latter, written by Ray Lawler – a man – has gone on to be a cornerstone of Australian theatre while Gray’s play was given the sexist elbow: staged once (1996, Adelaide) since its first production.

Catching up with the play at a matinee, away from the razzamatazz of opening night but amid the buzz of a full house, the emotional focus was instantly clear. In front of the traditional scarlet curtain hangs a giant signature in pink neon: “Oriel Gray”. Can you remember the last time – if ever – a playwright was similarly foregrounded?

Then, on strides a black-clad Pacquola to deliver a monologue introducing the play and why it’s important and why she’s there – although next time we see her she’ll be pretending not to see us. It’s vivacious, comical, apposite and demonstrates that Pacquola is a charming, vibrant and funny woman. This is both just as well and also a mistake, because it’s the spirited highlight of the following hour and 40 minutes. 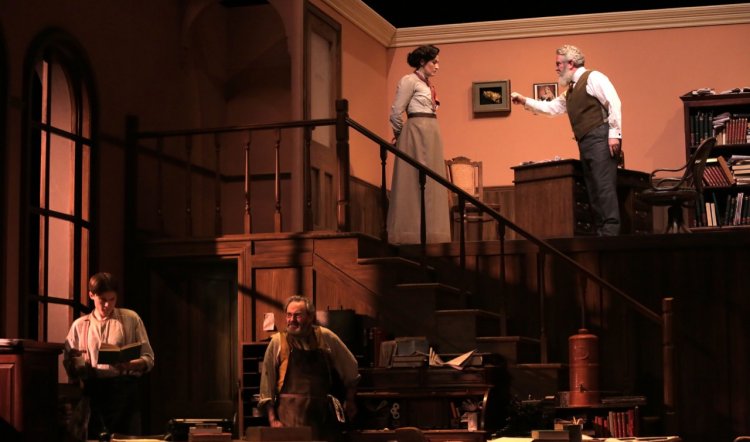 The Torrents is set in the goldfields town of Koolgalla in the 1890s. The local newspaper, edited by Rufus Torrent (Tony Cogin) and idly assisted by his son Ben (Gareth Davies) is awaiting the arrival of a new journalist, JG Milford. Shock horror when the “J” is Jenny, a no-nonsense, independent woman from Tasmania (Celia Pacquola).

Naturally, the staff, Jock the sub (Sam Longley), Christy the compositor (Geoff Kelso) and Bernie the new boy (Rob Johnson) have conniptions. Not nearly as conniption-ful as major investor Mr Manson (Steve Rodgers) who expects all to dance to his blustering tune in return for $$$.

Giving the play real prescience, Kingsley – a local entrepreneur – tries to persuade Rufus to editorialise for his scheme to bring water to the region. Future-proofing against dwindling gold – to grow gold on fruit trees – is his vision. Kingsley (Luke Carroll) is in love with Ben’s fiancee Gwynne (Emily Rose Brennan). He’s also stuck with the most dreadful dead cat wig.

So the plot(s) are set and signalled. They happen in a handsome Renee Mulder designed, two-level newspaper office – realistically timbered and inky, with long windows that brighten the early electricity (lighting: Lucy Birkinshaw). All is punctuated and momentarily energised by Joe Paradise Lui’s rollicking composition.

Director Clare Watson, boss of Perth’s Black Swan Theatre Company, originators of the production, has worked hard with dramaturg Virginia (Calamity Jane) Gay to punch up the physical and visual comedy. Unfortunately, it’s probably impossible to overcome the stiff script and characters – as wooden yet lightweight as balsa. 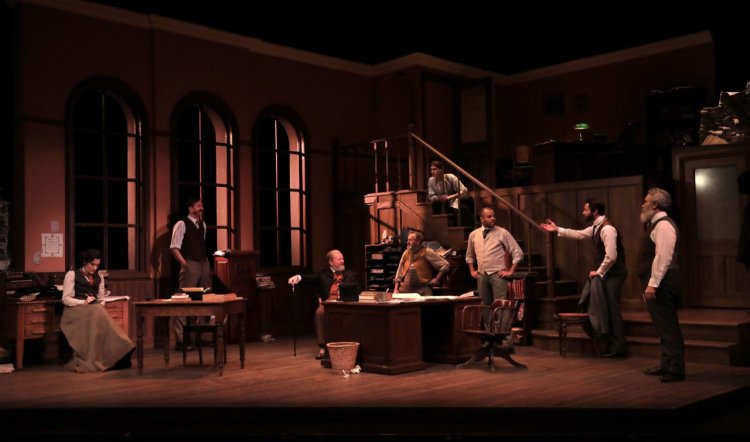 My +1, birthday girl and god-daughter Felicity Dayhew (formerly children’s reviewer for Stagenoise) hit the nail on the head as we left the theatre more subdued than expected. She had quite enjoyed it, she said, politely. (Having recently seen A View From The Bridge and Mary Stuart, her standards are high) “It’s like it’s a play for little kids,” she went on. “There’s no drama, no real conflict, Mr Shouty just shouts and he isn’t scary.”

She’s right – not that The Torrents is about children, but real drama, conflict and action are missing. And as for being proto-feminist: Pacquola’s Jenny spends her time typing up editorials for Mr Torrent, listening to the men with the close attention of Nancy Reagan, doing more typing and correcting, helping Ben find himself and – of course – winning over the men.

Meanwhile, Gwynne is a dutiful young woman and sap. Two minutes in Jenny’s company is enough to open her eyes to the possibility of being herself, but as the script gives that self nothing more...

This is also true of the other characters. All are either ciphers or stereotypes and only Gareth Davies as the son suffering ennui and dad’s shadow is able to bring his trademark insouciance to bear. He’s also a dab hand at hurling his hat across the room to land on a coat peg. That this elicits a round of applause says a lot about what’s otherwise missing.

The show is gorgeous to look at and Mulder’s costumes are a detailed treat, but the cast has little to work with beyond caricature and that quickly becomes tedious. Treating women and the environment badly is obviously as relevant today as in the 1950s or 1890s, but is that it? It’s quickly obvious why The Torrents was ignored – and will be again. No amount of politically correct fulminating can breathe life into it and dragging its major themes up the flagpole doesn’t make it a classic. Already a box office hit, however!