Sydney Theatre Company’s venerable cash cow The Wharf Revue is a sure marker of the approaching end of the year. It’s around this time that most need a bit of a gee-up, especially these days. When art has given up imitating life and vice versa, and satire is almost impossible because reality is utterly unbelievable, the only thing to look forward to is “the Revue”.

And it doesn’t disappoint, despite the on-stage absence of ubermenschs, Jonathan Biggins and Phil Scott. Unr-dact-d is theatre-cabaret-revue at the sharp end of excellence. Created by the original team of Biggins, Drew Forsythe and Scott, the music and lyrics are more often than not as fine, funny and acerbic as anything by Tom Lehrer, Peter Cook and Dudley Moore or Gilbert & Sullivan.

As befits a state theatre company institution that’s routinely the fastest ticket sale each year, the creative resources are glossier than ever. Home base is the Ros Packer auditorium and its cavernous stage is smartly contained and tricked out with a Puttin’ on the Ritz-style set (Charles Davis), stylishly lit (Matt Cox), and backed by a big screen for the integral video segments (Ben Lightowlers). All this, together with dozens of costume and wig changes, brings the Revue perilously close to sumptuous, yet always undercut by the clear-eyed, unsentimental, laugh machine vision of its creators.

Opening with Lena Cruz in top hat, white tie and tails and “The Diversity Tango”, this show is very 2019 – with Australia at its most openly racist since “We will decide who comes to this country and the circumstances in which they come”. (Almost 20 years ago, btw.) 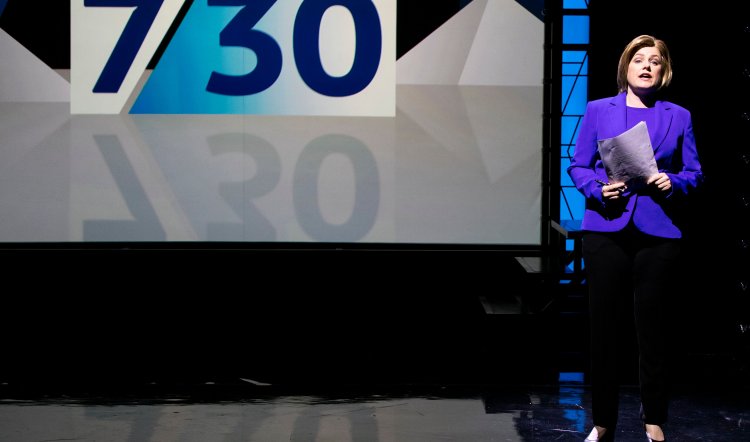 Cruz also hits the high spots as Kim Jong Un, wondering why the f**k she’s speaking in broken English to two trembling North Korean generals who are obviously Caucasian, because she’s from the Philippines anyway and ... well, you have to see it. It’s very clever. Also shockingly smart is the show’s take on secular goddess Aung San Suu Kyi. You have to see that too.

With two women in this year’s show, the Revue is as close to parity as it’s ever likely to get, being a boys’ creation and all that. Helen Dallimore is the other female – unless being fashionably gender-blind means Drew Forsythe’s cruelly accurate Pauline Hanson is included – and Dallimore displays eye-popping versatility and hitherto hidden wickedness as Donald Trump and also as a range of media mavens in a segment of the ABC’s 7.30. In it, with the close collaboration of herself on split screens, she is simultaneously Leigh Sales, Ita Buttrose, Janet Albrechtsen, Bronwyn Bishop and an uncanny Laura Tingle.

With Andrew Warboys dazzling on piano and occasionally helping out on stage, the other star among stars is Australia’s Simon Burke. He is remarkable – and remarkably silly – as Alan Jones, Tony Abbott, George Pell, Boris Johnson and Scott Morrison. Burke has splendid scripts to work with but his lack of vanity and ability to capture the horrible-hilarious essence of these men is breathtaking. 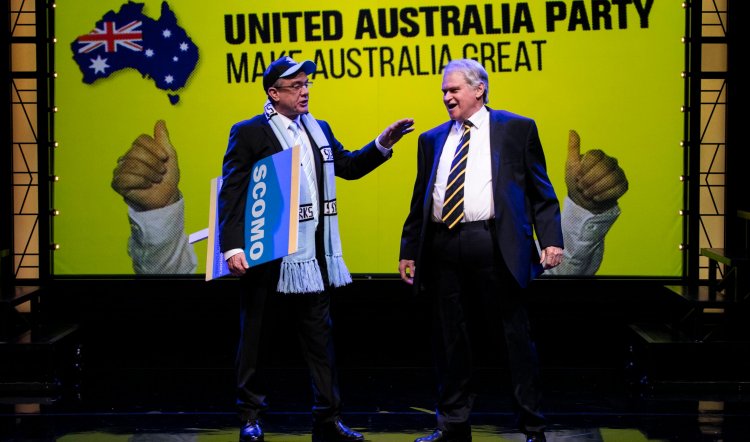 The set-pieces are also keenly wrought: an all-cast take from Hamilton skewers Donald Trump as never before, while Cabaret is taken back to its dark roots by Burke and Forsythe: shiver and laugh but don’t look away. Forsythe also delivers a gentle, ironic version of “Thanks For The Memory,” as Bob Hawke from inside the Pearly Gates. It’s one of the rare but fitting tender moments that make the Revue shows so much more than mere laff-fests.

If you hang out each year for the Wharf Revue, you don’t need more encouragement. If you’ve yet to experience the unique creative team and on-stage stars of this 19-year-old phenomenon: what are you waiting for? Recommended without reservation.