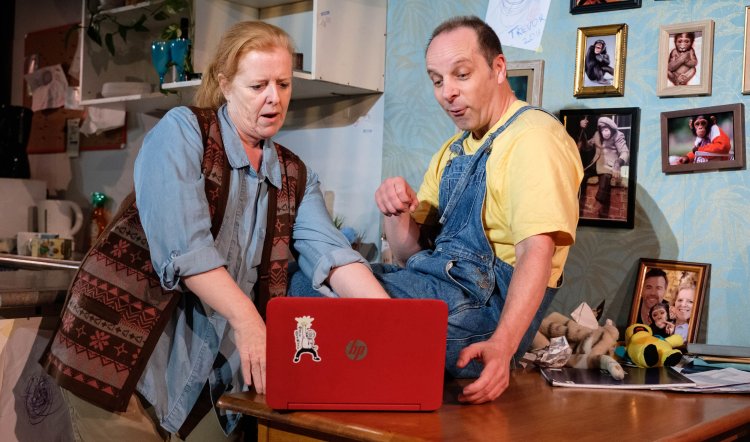 Truth being stranger than fiction is one of the truest of truisms, so to take a scarcely credible truth and construct a fictitious but credible reality on it is quite a feat. US playwright Nick Jones has done this with Trevor and the word in the foyer after the performance was “amazing!” In this instance, it’s not just the play but also the production and performances eliciting the response.

Di Adams saw Trevor in Los Angeles and was taken by it. In particular, the central character of Trevor the TV star Chimp, with the idea that her husband Jamie Oxenbould could play him. Oxenbould bought the rights. Three years later, with Shaun Rennie directing the pair as Trevor and his owner Sandra, it’s a triumph at KXT and not to be missed.

Trevor is comical on one level and disturbing on others. You might recall a pet chimp who lived happily somewhere in the US until he went bonkers, or reverted to the wild, and attacked his owner’s friend, with horrible consequences. Jones has taken the kernel of that story and extrapolated beyond plain facts to explore miscommunication and love gone wrong.

In amongst the domestic clutter of a suburban kitchen-living room are a few jarring elements. There’s a large cage in one corner; a gallery of chimp snap shots on a wall, and a life-size cutout of starlet Morgan Fairchild is propped to one side. (Gorgeous set and costumes by Jonathan Hindmarsh with punctuating lighting design from Kelsey Lee and atmospheric soundtrack by Melanie Herbert.)

Sandra and Trevor live here, she in a warm-fuzzy maternal role, he in an increasingly frustrated state of longing for past TV glory. While they constantly talk to one another, neither has a clue what the other is saying or thinking and, at every turn, each gets it wrong. In short: it’s the classic flawed relationship between human and animal, with the animal inevitably losing. 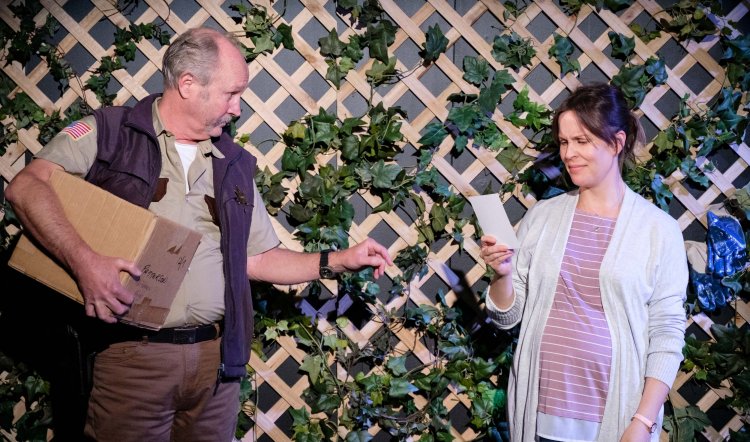 Ashley (Ainslie McGlynn), has recently moved in next door where, oddly Sandra thinks, no one ever stays long. A reason why becomes evident when Ashley diffidently complains about Trevor driving Sandra’s car, which is now bogged in Ashley’s wrecked front yard.

“Bad,” says Sandra to Trevor, signing her disapproval. Ashley isn’t convinced and suggests he should be confined to the cage. Sandra is appalled: he doesn’t like it, she explains. Meanwhile, Trevor is fretting about whether or not Morgan Fairchild is going to cast him in her upcoming TV show. He is also agitated by Ashley’s crying baby and, to the equally unsettled Ashley, is becoming less cute and more frightening by the minute.

The sheriff (David Lynch) turns up and with gentle persuasion, manages to convince Sandra that a chimp – even Trevor – taking her car for a spin is not acceptable. She reluctantly agrees to an assessment by animal welfare.

Meanwhile, Trevor is “visited” by his past. There’s gushing, voluptuous Morgan Fairchild (Eloise Snape) and also his old Hollywood buddy, Oliver (Garth Holcombe), a dude chimp in a silver lamé suit and obnoxious attitude. Both are glittering symbols of the good times and serve only to increase Trevor’s resentment.

To Jerry (Jemwel Danao) the animal welfare officer, Trevor’s unruly chest-beating and leaping on and off furniture is all about Pan troglodytes, rather than the understandable vexation of a thwarted movie star. For Trevor, Jerry is the enemy, plain and simple. 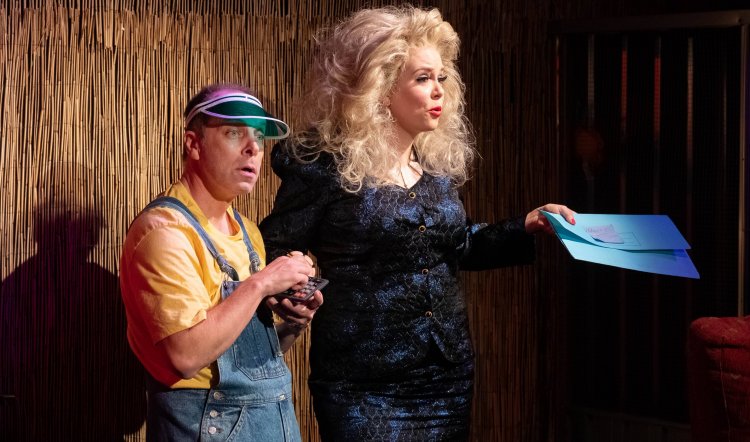 That there will be not just tears before bedtime, but outright tragedy becomes glaringly obvious as the chasm between the species widens. The way this is conveyed, in intricate conversations and monologues, is cleverly effective. The surreal never overpowers the everyday but adds an edge of nervous humour to a mix that gradually and then rapidly careers out of control.

Shaun Rennie’s direction is dextrous and sharp (particularly in his handling of the traverse stage and demands of multiple focus moments) and the cast, led by Oxenbould and Adams, is outstanding. In two short but key scenes David Lynch makes telling interventions in the story’s progress and its humanity. Jemwel Danao is similarly effective in his brief appearances. Garth Holcombe’s louche fakery as the fantasist Oliver is both amusing and sad.

Eloise Snape has made a truce with her monstrous blonde wig and in the outbreak of peace, the two effortlessly conjure up the heyday of B-grade TV stardom; no wonder Trevor remains enamoured. At the other end of the female spectrum, poor Ashley (Ainslie McGlynn) represents any sane, reasonable person finding themselves in insane, unreasonable circumstances. Her fear is subtle but catching.

The centre of attention, in more ways than one, is Trevor the has-been, misunderstood, ill-fated animal star. Jamie Oxenbould’s performance is intensely physical and also deeply emotional. He doesn’t do cliche chimp acting (grimaces and Cheeta-screeching) yet is so deeply chimp it’s at once heart-rending and then, as things go pear-shaped, terrifying. Amazing performance.

Holding it all together as not only the straight woman but also the unwitting villain of the piece, is Di Adams as Trevor’s lonely, deluded mommy. Of necessity it’s not a showy role and Adams inhabits it with restraint and subtlety. Great stuff. And not a banana in sight. Recommended without reservation.