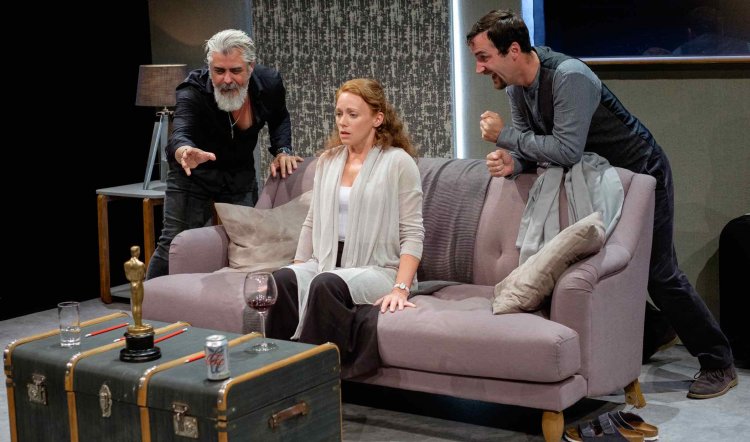 The final “big ticket’ event of the 2019 Adelaide Festival was worth the wait: coming in to the city direct from a return season in Edinburgh. The demands of David Ireland’s non-stop, 90-minute, blackest of black comedies are met by the actors – Darrell D’Silva, Robert Jack and Lucianne McEvoy.

They form a tight unit of excellence and shocking hilarity – at ease with the quick-fire dialogue, the agile twists and turns of the plot and the demands of Gareth Nicholls’ direction that highlights three comically hyper-realist characterisations.

Leigh Carver (Jack) is an ambitious English theatre director whose sights are set on the National – one day – and an immediate stepping stone in the form of the latest play by his friend Ruth Davenport (McEvoy). It’s a promisingly controversial drama about Northern Ireland and it’s attracted the participation of Hollywood megastar and Oscar-winner, Jay Conway (D’Silva).

Leigh and Jay are meeting on the eve of the start of rehearsals to discuss the play with Ruth, who’s late. Jay is a bombastic fruit-loop whose tight black jeans, boots, open black shirt and leather bracelet telegraph his refusal to let go of his bad-boy self image, despite a teeny paunch, silver hair and beard.

Leigh is frantic to please and appease his volatile star. He nervously gets stuck into the red wine even as Jay rambles (on repeat) about his sponsor, the twelve steps and sucks on a Coke can. Leigh is a tightly wound young man, his collarless shirt is buttoned to the neck, the cuffs buttoned neatly around his wrists. His appearance is as suffocating as Jay’s is loosely louche. 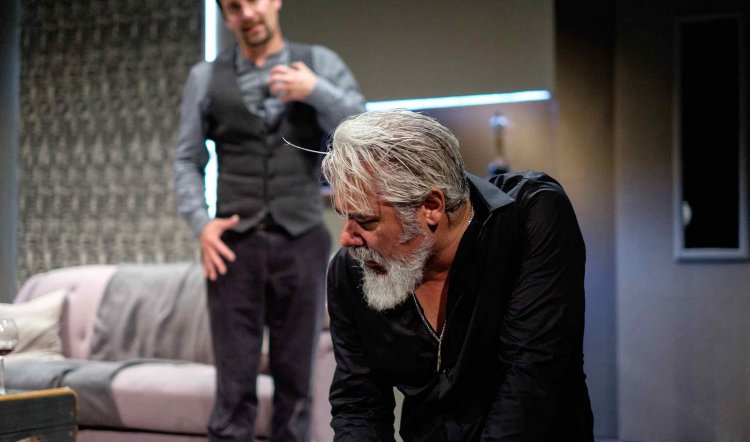 The single setting is Leigh’s apartment and it reflects him: generic beige, charcoal and grey; anonymously contemporary in decor and lighting, with one incongruous human touch – an old cabin trunk doubling as a coffee table. (Set and costume designer Becky Minto, lighting designer Kate Bonney.)

By the time Ruth arrives – she and her mother have been in a car accident and mum is now in hospital – Leigh and Jay have gone places in their personal explorations of life and attitudes sufficiently hair-raising to cause mass outbreaks of nervous laughter in the auditorium. It started out innocently enough: Leigh tells Jay about his admiration for an early movie in the star’s oeuvre, Jay leaps on a particular scene in that film to demand Leigh tell him who he would rape if he was forced to.

This strand is the one that has been controversial in the play’s life to date. However, in context, it would be hard to be offended (by the extreme offensiveness of it) unless one had the righteous stick of wokeness stuck where the sun don’t shine. Jay’s interrogation of Leigh and himself and its subsequent fallout possibly say more about individual audience members than about human behaviour – bad, #MeToo or otherwise.

Ulster American is also eye-poppingly timely in terms of Brexit and the rubble that is the United Kingdom and its (current) government. Leigh’s grand ambition with Ruth’s play is that it symbolises Britain-Northern Ireland-Ulster and the backstop, stopback, post-referendum, pre-second referendum, hard and soft border anxiety of the country.

Ruth thinks nothing of the kind. Her play is about politics and terrorism and the individual as anti-hero. She’ll not have a word of it changed to please either Leigh or Jay who, meanwhile, has been dreaming that the play will immerse him in his Irish roots, of which he’s both puffingly proud and utterly ignorant. 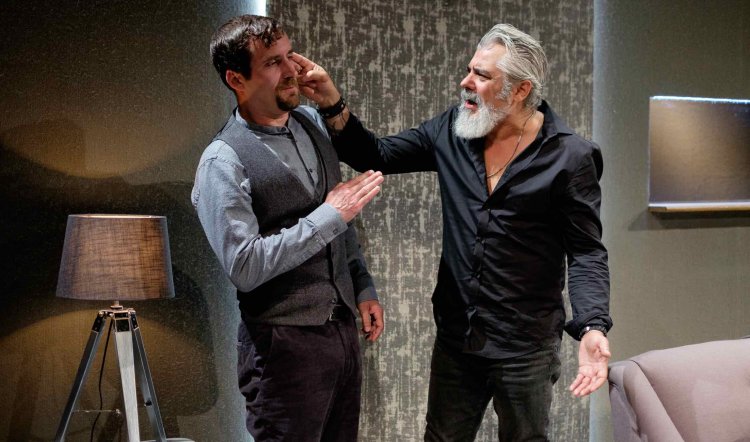 The initial arguments between the men are combative, shirt-fronty, verbose and...manly. When Ruth splits the pair it does not become a triangle however, as each man, although in opposition to the other, still can’t help but gang up on her; mansplaining has never had it so good. The ancient caveman residing in the male DNA bubbles to the surface with amazing speed. Perhaps it’s the tantalising mention of Tarantino...

The imagination and politics in Ireland’s writing become more and more apparent as the play progresses. Comedy and tragedy are tossed back and forth, satire and wicked wit combine to reveal each of the trio for what he or she really is. In the end, in a final twist that fills the theatre with raucous female laughter there is...a final twist. You’d be hard put to see it coming and if anyone tells you – they’re no friend.

Ulster American is distasteful, hilarious, politically astute and incorrect. The actors are scintillating and it’s a wonderfully clever, frequently brilliant night out. Hang on to your corsets and trusses, Adelaide: you’re in for an outrageous ride!