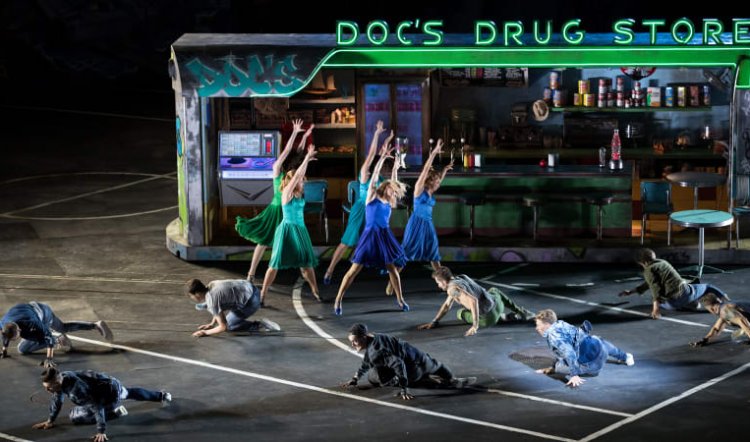 WEST SIDE STORY ON THE HARBOUR

The opening night of Opera Australia’s 2019 harbourside extravaganza began in a steady but oddly pleasant downpour. Were we at West Side Story or Singin’ In The Rain? Then out came hundreds of ($5) recyclable, white ponchos and suddenly the audience was transformed into glistening rows of condom people.

So, imagine the power of the all-singing, all-dancing, all-dynamic company, that the opening scenes not only survived these distractions but were electrifying. The skill and precision of the ensemble in the Jerome Robbins-originated dance sequences – realised for the vast outdoor stage by Julio Monge – and the synchrony between singers and orchestra (under the baton of Guy Simpson and under the stage in a tarp-lined cavern) was just breathtaking.

The dancing and singing can’t happen however, without Leonard Bernstein’s fabulous score, Stephen Sondheim’s lyrics and Arthur Laurents’ book. The music holds up without effort, the book is showing signs of its age, and the lyrics are, well, Sondheim and a simple reminder of his precocious brilliance. All these components were flawlessly executed on a raked stage that sported unintended rivulets and puddles through which the cast splashed with carefree abandon. The women, in slip-proof black sneakers and the men in hi-tops and similar black footwear, displayed astonishing confidence – and Jennifer Irwin’s delicious ’50s costumes. (Lots of flaring bias-cut skirts and can-can petticoats.)

The show – or 20th century NYC take on Romeo and Juliet with added racism – is as tragically poignant as ever, partly because of the continuing relevance of race and class and partly because this Tony and Maria (Alexander Lewis and Julie Lea Goodwin) are a couple with tangible chemistry. They can also sing in that uncommon territory between musical theatre  and opera that sounds credibly of this world while also soaring to rare heights. 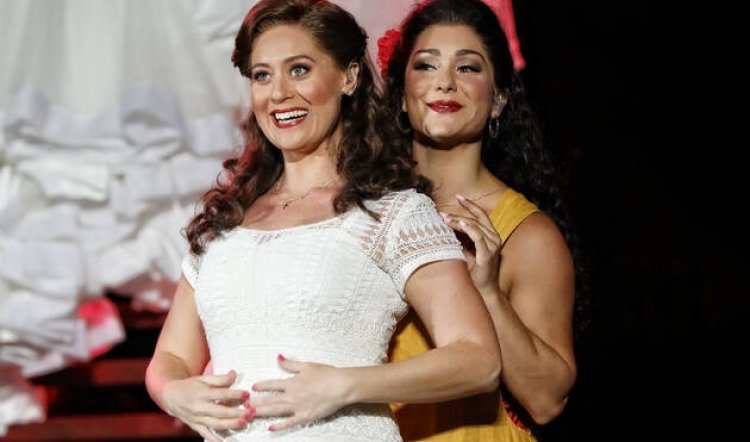 Director Francesca Zambello foregrounds the sadly-familiar behaviour of violent hostility between the Jets, a gang of white boys protecting their turf (and women) from the Sharks. They also disdainfully call them “PRs” or Spics because they’re Puerto Rican immigrants. Although, of course, Puerto Rico was an unincorporated US territory, not a foreign country; but its people are brown.

Set designer Brian Thomson excels himself with the “asphalt” stage, white-marked for basketball, occupying at least two-thirds of the huge pontoon. It’s made humanly intimate with a two-storey tenement, complete with fire escape moving downstage for Maria and Tony to do their balcony ting, while ominous mean streets are sketched in with John Rayment’s lighting on graffitied subway cars. They variously bracket the playing area and include one that turns to reveal a classic, neon-signed diner. High above the gritty evocation of underclass Manhattan looms a bridge span that effectively contains the stage and focuses attention on the action below. And the action is a continuing, seamless panoply of classic musical theatre.

The set pieces are all precision and sparkle with the youth gangs malevolently in sync for their chest-beating rituals. Minus testosterone but plus extra pizazz – the girls are scintillating with a dazzling “America”. Solo stand-outs are Karli Dinardo – making her home debut after two years in Hamilton in the US – grabbing the spotlight as Anita in “A Boy Like That” and whenever she’s on stage. Her partnership with Waldemar Quinones-Villanueva (as Bernardo) on “Dance at the Gym” is exhilarating. And Mark Hill is dynamic as Jets leader Riff, while Tony and Maria are shiver-making with “One Hand, One Heart” and “Tonight”.

The sound mix was a bit rough on opening night with the solo voices blaring, while the ensembles were beautifully calibrated and working well with the orchestra – all powered and underscored by an essential and fabulous drummer (Jamie Castrisos). 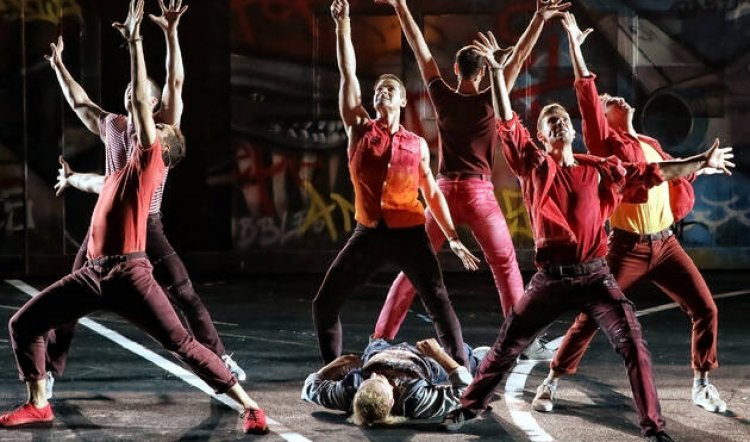 Altogether, this West Side Story works beautifully on the vast arena of Sydney harbour. The fireworks generated by the production and the company out-sparkle the traditional pre-interval burst of bungers and it’s a thrilling night out with extra pathos. (Thanks to Zambello’s vision and her tinkering with the end, which leaves us in no doubt of the tragedy and is more in keeping with these times.)

A powerful and spectacular production that blurs the lines between musical theatre and opera and gives us the best of both. Recommended without reservation.