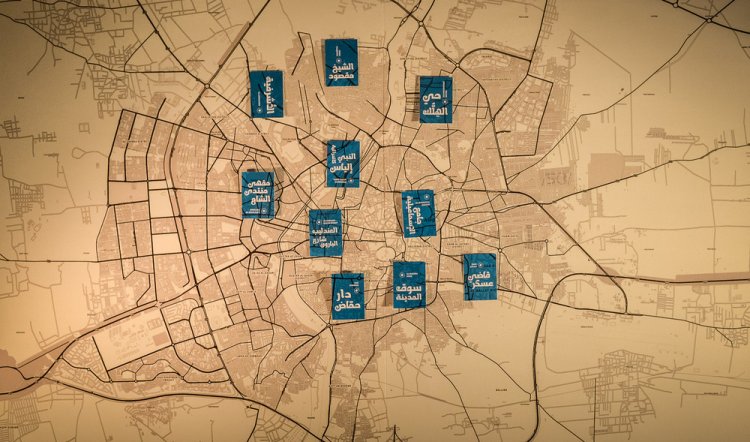 Yet another Adelaide Festival gem, Aleppo. A Portrait of Absence, is housed in the Queens Theatre on Playhouse Lane, the oldest purpose-built theatre in Australia, opened in 1840 and still putting on a brave face. It’s more archaeologically ravaged these days, however, so it’s an ideal setting for an exploration of one of the world’s oldest cities, now destroyed, through the memories of ten one-time inhabitants.

Aleppo was devised and staged in Berlin in 2017 by Mohammad al Attar with director Omar Abusaada and designer Bissane al Charif. Syrian exiles told their stories of the city. Ten were recorded – in Arabic – and these are played back to a paying guest. That’s how it is.

In Adelaide, when the doors open, ten people make their way across the empty vestibule to a large, free-standing map. Outside, the hubbub of nearby construction work is only vaguely muted when the doors are closed: it’s oddly appropriate. High above in the gloom are the theatre’s bare rafters supporting its un-insulated tin roof.

For some minutes we study the map where streets and districts are named in Arabic and ten small sections are jigsawed out of the timber and raised above its surface. What’s obvious is the density and complexity of the old city with all its human energy and life: alleyways, boulevards, streets and many, many buildings, open spaces, squares and parks. At the same time, we know from news footage and YouTube that what we are looking at no longer exists, but which bits and what they represent…who knows? 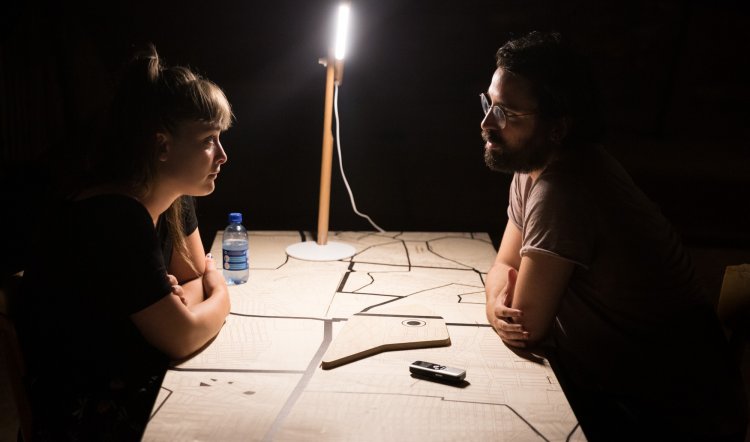 An attendant tells us to take one of the raised pieces from the map. Which one you get depends on luck and your nature: a nervous grabber, a speedy plucker, a stand-back-and-wait type, a who-cares sort. And so on. We each clutch our bit and are shepherded to a table where we’re issued with a mini-recorder that corresponds to a number on our chunk. Then we are shown into a new and entirely dark place.

It’s always unnerving to step blindly into pitch-black, but also quite funny listening to nine others shuffling about in the same state of trepidation. Gaunt light comes up to reveal the main auditorium – empty and cavernous – mostly in gloom but with ten circles of light on ten tables scattered about the space.

We’re told to find the table into which our bit of map will fit. In this unlikely setting and while under unaccustomed instruction, everyday self assurance is already evaporating and dissipates further as we search for the place where we will fit (get it?). It’s a relief to get my bit of map in the right slot. I sit at an empty table across from an empty chair and wait.

A disembodied male voice begins to tell the story of Aleppo and the recent civil war and catastrophes. At least, I think he does. It’s hard to fully understand, what with construction racket and the echoing acoustic of the auditorium. Will I miss something? Will I hear it wrong? Will there be trouble? Will I mess up? 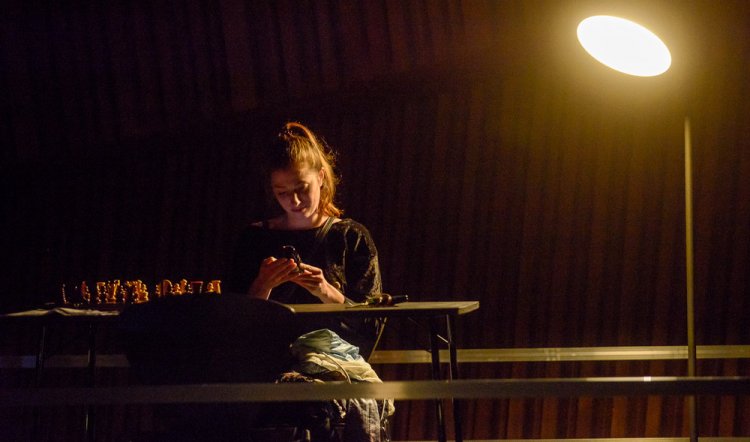 Being out of place and out of joint is a disconcerting experience; and its not even as if my life is in danger. A young woman joins me. She smiles, I smile back. She presses “play” on the recorder and a female voice, tinny, distant and speaking Arabic, begins. After a minute or two the young woman takes up the story – in English – and I learn that her favourite place from childhood was the Souk – Aleppo’s great market.

With loving, faraway eyes, she describes the marketplace with its fragrance of herbs and spices, the reek of the meat section masked by those aromas; going with her grandmother, buying a special treat on Saturdays. She tells of longing to return and of realising she cannot – that it’s not only physically gone, but what she holds in her memory has also gone. It’s a shock: I know this too.

The need to concentrate, to listen, is intense as are thoughts about the impossibility of returning; of the relentless forward motion of exile. The actor stops, tells me to record my own message to the woman who now lives in Istanbul, and leaves me to it. It’s an unexpected and overwhelming experience. I share a bit of what I know of landscape, memory and loss. I cry and hours later, the sense of bereavement and gratitude are still acute.