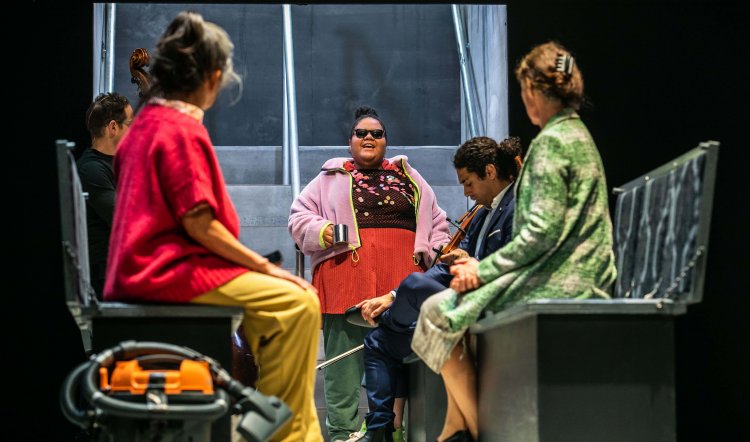 Twenty-something years ago, Andrew Bovell, Patricia Cornelius, Melissa Reeves, and Christos Tsiolkas collaborated on Who’s Afraid of the Working Class? a play for Melbourne Workers Theatre. It was staged at the Victorian Trades Hall Council, then two years later at Belvoir Street and was a full-on punch on the snout for politically enlightened but mainly comfortably middle-class audiences. Extraordinarily, that same quartet – now individually successful household names – has come together again and the question in the title continues to be explored in Anthem.

After two decades of political, social and economic upheaval, it’s possible middle-class theatregoers are more afraid than ever because so many of the previously noble working class are now an underclass, with “work” being a distant memory thanks to the triumph of economic rationalism. And, as is highlighted in the play, some previously comfortable middles (particularly women) have been pushed into working or worse.

Anthem is set on suburban Melbourne trains and a train station (imaginative design by Marg Horwell, lighting by Paul Jackson). On the platform at the foot of three flights of stairs are two buskers: Jenny M Thomas and Dan Witton. Their double bass and viola accompany and punctuate the action. (Composition, music direction and sound design: Irine Vela.)

Directed by Susie Dee with characteristic intelligence and precision, 14 actors range across age and ethnicity and also through the train carriages in an unsettling series of stories. Barely contained violence, displacement and discontent roll across the footlights in waves. It’s the rarely-seen underside of Marvellous Melbourne and what Donald Horne was warning of when he wrote, ironically, of “the Lucky Country”, and it’s mesmerising. 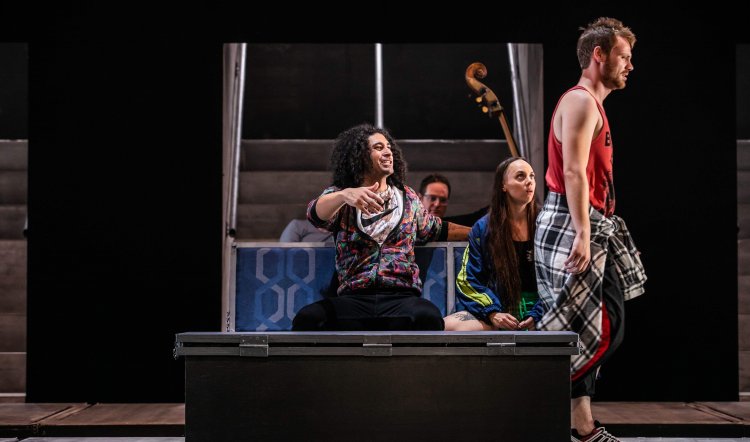 The opening sequence by Tsiolkas is set in the stage’s northern hemisphere and on a temporarily-delayed Eurostar from Paris to London. Two strangers, a black Australian (Thuso Lekwape) and a woke English woman (Eryn Jean Norvill) begin to talk then argue over Brexit, Trump, racism, populism and whether revolution is required. It seems at odds with the rest of the piece – down under – but, some two hours later, a corresponding coda goes some way to explaining it.

The Melbourne train passengers are a different mob altogether. Energy crackles around as Andrew Bovell’s disenfranchised and disappointed bang into one another. Their only point of harmony is in choruses of complaint about not enough trains, late trains and all the other familiar annoyance of inadequate public transport. Mostly, however, they are antagonists based on age, ethnicity and social status. And over it all is the spectre of Indigenous dispossession. Played by honey-voiced Ruci Kaisila, the cup-rattling, possibly blind, definitely wickedly sardonic busker makes Waltzing Matilda more than an anthem, especially when sweetly-opened tolerant hearts are hit with: “Pay up!”

Money and the lack of it are the steely strands running through Anthem. Some are wildly comical, such as Melissa Reeves’ incompetent Bonnie and Clyde – Sahil Saluja and Eryn Jean Norvill – holding terrified people hostage before discovering a couple of fundamental flaws in their plan.

Others are unexpected: in Tsiolkas’s Brothers and Sisters, Maude Davey is firstly an incensed white woman who stands up to three young mixed-race thugs (Carly Sheppard, Osama Sami and Reef Ireland) whose volcanic aggression stems from lifetimes without love, identity or respect. It’s my country too, she tells them without irony, then the warring sides are startled by one-time factory worker and his wife (Tony Nikolakopoulos and Maria Mercedes) yelling with utter conviction, “This is our country. We made this fucking country.” 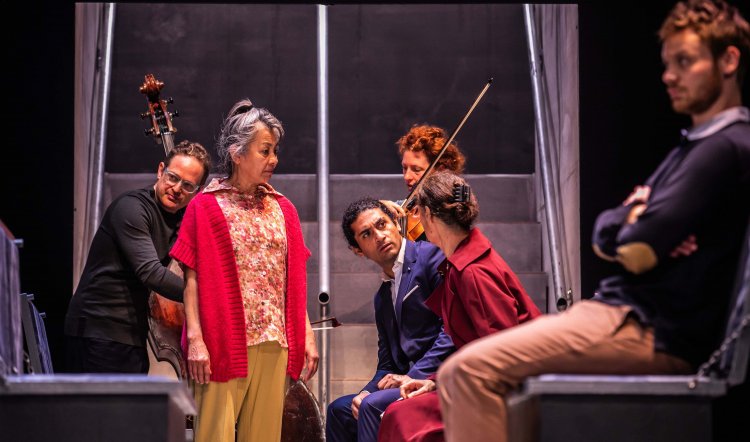 Davey comes into her own in a Cornelius strand as a once-well off Toorak-type lady whose husband made off with a newer model wife and every last cent. All she now possesses is in several glossy carrier bags. She bumps into her former cleaner (Amanda Ma) who’s lugging a vacuum cleaner and grudges against her former employer. Their relationship is a delight of handily slanted memory and barely disguised desperation and they are compelling.

Over time the passengers stare at their phones, glower at one another and jockey for space – in the compartments and the world at large. The psychic blows meted out on the unsuspecting and undeserving are enough to make one gasp and yet be unable to look away. A young mother (Eva Seymour) is doped, deeply angry and unmoved as her young son runs amok. He is enticed onto a seat and into a story by a pleasant, non-judgemental Eryn Jean Norvill. Rather than enjoy a bit of peace, the young mother is, of course, furious. There are further twists with the arrival of a ticket inspector and outcomes that pit expectations of motherhood against extreme poverty – of spirit and cash.

Is Australia as heedlessly cruel as is portrayed in Anthem? Have things actually become worse since Who’s Afraid of the Working Class? Yes to both. However, the writers have got better and consequently, Anthem is spellbinding and unmissable. It’s honest, not polite, it’s raw and it’s funny too when not grabbing your heart and squeezing hard. Anthem has the flaws of four writers carving out territory, but more importantly, it has their brilliance, and the director and cast to bring it all to life. Recommended without reservation.