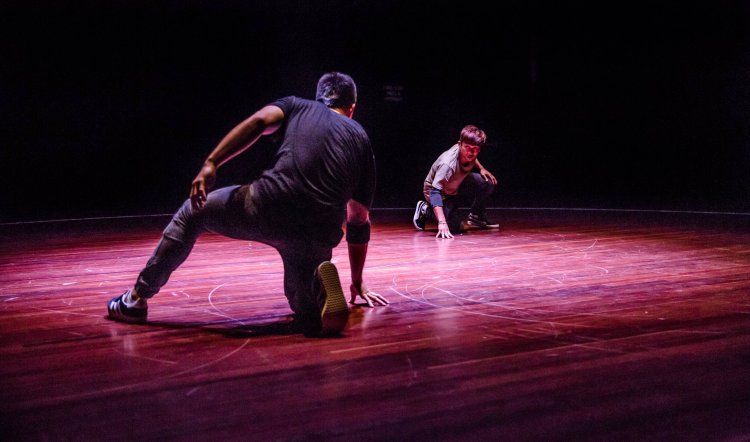 Picture this: standing around the edge of a hip hop circle on a Wednesday morning in Adelaide is a curious group of people. They are mainly white, middle-aged and female, there’s a smattering of older men, a few sheepish-looking young guys and a group of smartly-uniformed high school girls.

We’re in the Lion Arts Factory auditorium, a smartly modernised industrial space. It’s dark, lofty and a traditional 10-metre diameter “cypher” circle is white-taped to the floor. We are asked to stand behind the line, the show is 40 minutes in duration; a gaggle of suspiciously able-bodied looking matrons sit in stacking chairs, po-faced and steadfastly refusing to look anyone in the eye. WTF!?

Unannounced, out of this crowd, two young men step into the light, to circle and face each other. One is dark-haired, tall and muscular: Aaron Lim from Darwin. The other is slight, sinewy, copper-topped Erak Mith from Phnom Penh. In a work choreographed by Nick Power, to a soundtrack devised and compiled by Jack Prest, the two begin a slow, graceful, wary sounding out of the other.

Among the initial movements are the basics and opening up stages of classic improv b*boy battles: slow steps and hand and arm moves, into and out of almost personal space and beyond. It’s mesmeric and the two stare across the space, neither hostile nor friendly. The circle of eyes just outside the light stare at them. 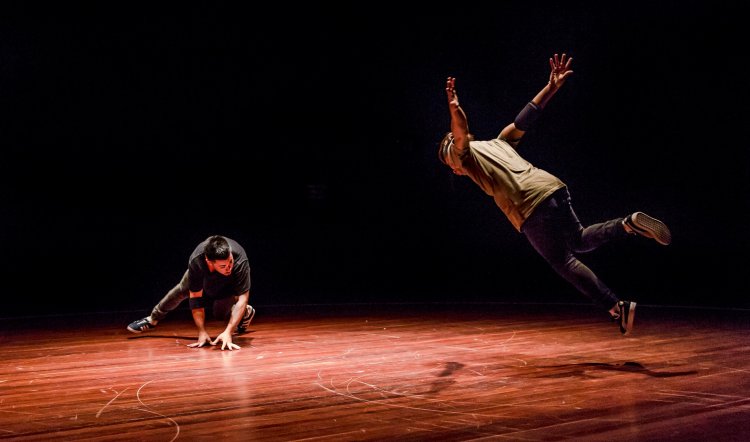 Gradually the movement begins to incorporate elements of contemporary dance, as well as the flying kicks and turns of capoeira, while remaining true to the raw discipline of the street form. Originally from Sydney, Power spent a decade in Lajamanu in the NT where he was immersed in Warlpiri culture and gradually began to see connections between Indigenous traditional dance and ritual and those of the New York-created genre.

Later, a four-year dance exchange took place between hip hop groups D*City Rockers in Darwin and Phnom Penh-based Tiny Toones youth program; and Between Tiny Cities came into being and has been touring at home and internationally since 2017.

The two performers are physically different and also approach their long duet/duel dissimilarly. Mith is mischievous, provocative and startlingly acrobatic, whereas Lim is saturnine, watchful and given to explosive displays of agility. It’s exciting, and verging on dangerous in the opening sequences.

Then they collapse in the centre of the circle, sweat flying off their bodies, drinking bottles of water and panting mightily until slowly their systems return to normal. The audience watches patiently, fascinated by this unusual exposure to the reality of such effort and skill. 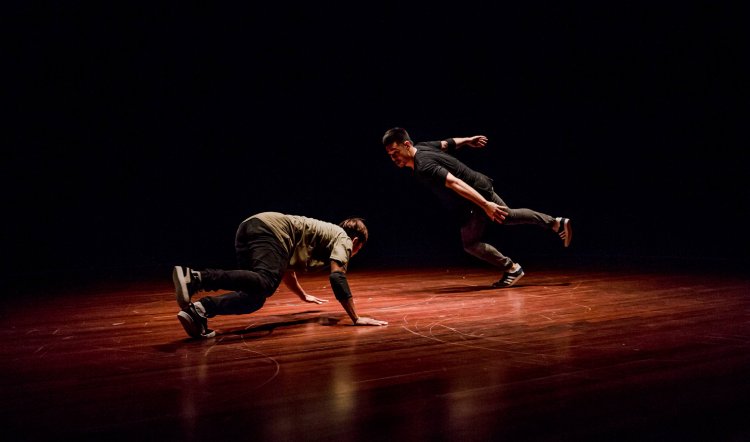 The second half, carried out in changing lighting states to reshape the circle (design: Bosco Shaw) is more reflective and gentler. And the dancers come together in pas de deux of entwined arms, angular hands, catches and falls. Living sculpture morphs into competitive tumbles, rolls and one-armed arabesques – except they’re not that simple or dancey of course.

The beats and sound rise and fall, sometimes rhythmic, sometimes abstracted beyond recognition. The sense and feel of both sound and physical movement are tangible in the space. The proximity of the audience to such a visceral exposition is thrilling – breakdancing as cock fight without spurs or blood, perhaps. Or a 21st century take on the tap rivalry of Bob Hope and Jimmy Cagney, except Mith and Lim are beautiful and this is a surprisingly contemplative experience.