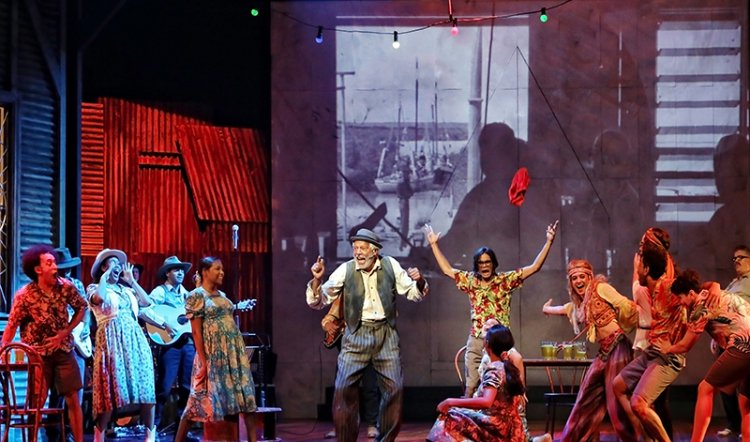 When Bran Nue Dae opened at the Seymour Centre for the 1991 Sydney Festival it was as if the sun had come out on an otherwise grey day. The effect was joyous as Jimmy Chi’s songs – written solo and with his band, Kuckles – delivered a breath of salty Broome air.

Likewise the story: indigenous teenage Willie being thrown out of Catholic boarding school and deciding to head home and away from the punitive white god. He hitches a ride in a VW Kombi with hippy tourists Slippery and Marijuana Annie and along the way they meet Uncle Tadpole. He’s also heading back after years of droving and drinking: he’s given up one but not the other.

When this ramshackle mob arrives in Broome the plot thickens (from paper-thin to not quite see-through) as relatives lost are found, unknown identities are discovered and families reunited. It’s Shakespearean in coincidence and outcome. And just beneath the sunny surface are the truths of Aboriginal Australia – of 40 years ago and today. Reconciliation is as far off and white Australia still insists on hiding from its history.

Yet it’s 2020 and it is a Bran Nue Dae, and this delicious lolly of a show is generous in spirit and sweet in outcome as to make a proud old racist sit up and smile. If only one could get old racists to come and be beguiled: on this extensive national tour, anything is possible.

One of the best things is that Ernie Dingo returns to reprise the role he originated, only now Uncle Tadpole really is a rascally old fella rather than the greyed-up spunk of 30 years ago. He is utterly charming and his raspy voice and silver fox head are irresistible to the audience and Theresa (Ngaire Pigram), the girl he left behind. 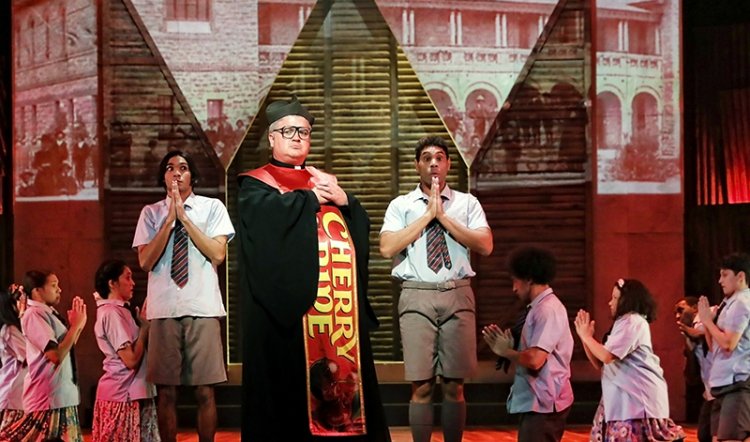 Aunt Theresa is now a formidable figure in her community, however, and Tadpole’s Ps and Qs need a good minding before she allows herself to succumb once more. That means some gorgeous duets as well as rich solo vocals from Pigram – she’s a name we should know on the east coast.

Holding his own in the charm and singing stakes is Marcus Corowa as Willie. He nurses what he thinks is unrequited love for Rosie (Teresa Moore) and is as gawky as any teenager until she takes him in hand. Again: the voices are magical and the old-style Indigenous C&W suits both the show and cast.

As the traveling hippies, Callan Purcell and, on opening night, understudy Danielle Sibosado, make the most of their ditzy characters and also manage, with the others, to minimise the more unlikely elements in the plot. Andrew Moran’s operatic Father Benedictus is steeped in dramatic and vocal conviction and he appears to be one of those rare men of the cloth who keeps his hands to himself.

That aspect alone – a non-predatory priest – marks Bran Nue Dae as being of its time. At the same time, a song from the young women is also not of our lemon-lipped era: “If you don’t use those condoms, then you can’t poke my hole,” they gleefully sing in Seeds That You Might Sow – and inflated frangers float down to the audience. Ah, those were the days.

The show takes place in Broome’s old outdoor cinema, where the night sky twinkles above and rusty tin walls surround movie-goers sitting in rows of deck chairs, bare feet in the sand. On the back wall, on the cinema screen, are projected historical photographs and other visual clues. Bentwood chairs make the Kombi van; the “Sun Pictures” cinema sign in white light globes drops from above, and strings of coloured lamps appear for party time.

The costumes are a triumph: Father Benedictus says Mass in robes that worship the Cherry Ripe rather than the Almighty, while holy-roller preacher Pastor Flakkon (Czack Bero) does his Come-to-Jesus thing in a silvery lamé suit that Elvis would have coveted. (Mark Thompson: set and costumes, Mark Howett: lighting.)

Original director Andrew Ross has brought the show to the stage and while it looks and sounds wonderful (musical director: Michael Mavromatis, sound design: Michael Waters, choreographer: Tara Gower), strict adherence to the original script is a pity. There are plot sinkholes into which the Kombi could have fallen and never been seen again. Similarly, one-dimensional characters are unnecessarily hard on the performers and could easily be rectified (and were in the Rachel Perkins/Reg Cribb movie version).

That said, Bran Nue Dae is the effervescent and meaningful celebration of music, family, Aboriginality, Australia and reconciliation that is still sorely needed. Take the family – and your racist rels. A Sydney Festival winner.