In 2017, at the time of his premature death at the age of 46, Dr G Yunupiŋu was Australia’s most successful and loved Indigenous contemporary musician. Songs and albums celebrating his Yolŋu heritage, as well as the haunting “I Was Born Blind”, topped the charts and his fame had spread internationally.

Now, three years on, his final work Djarrimirri is not only an album, but also, under the overall title Buŋgul, a theatrical concert staging of the work. It’s a multimedia production with elements filmed on his home country Elcho Island in north east Arnhem Land. There, Yolŋu dancers perform ceremony on a beach – filmed and projected in the theatre where cameras capture live the onstage dancers as they mirror the filmed sequences.

A camera high above the stage focuses on the patterns in the floor and those made by the dancers and again, these are echoed in filmed sequences where the men ritually paint their bodies and other elements such as a flagpole in a buŋgul – a ceremony. 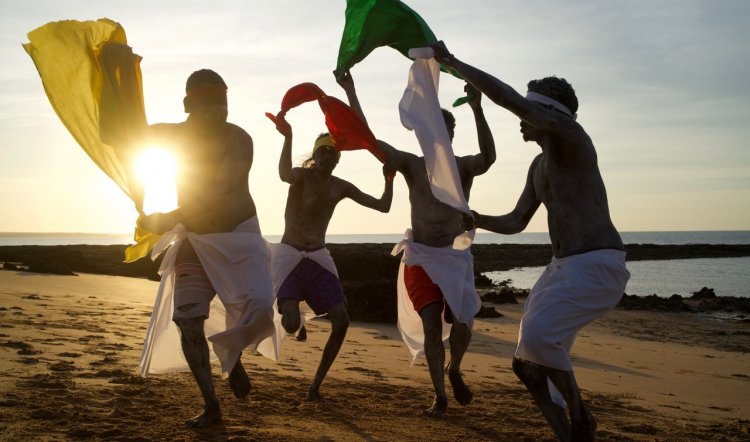 To one side sit song men and they counterpoint, or harmonise in performance with the Adelaide Festival Orchestra (augmented string section, horns, percussion) which occupies the rear part of the stage. Interwoven at various points is a pre-recording of Dr Yunupiŋu’s distinctive voice.

Cameras operated from beyond the footlights and another high in a box at the side of the stage catch arresting close-up images of the live action; all is directed by Don Wininba Ganambarr and Nigel Jamieson.

The effect is dramatic, hypnotic and thrilling, the orchestrations are minimalist yet luscious and were co-created with Michael Hohnen and Erkki Velthiem. The work is delivered in sections – named on the screen in English and Dhuwala – and in its simplest form, follows the pattern of life and a day in that life. Not surprisingly, the crocodile (Baru) is prominent with its rhythmic and mysterious musical motif. 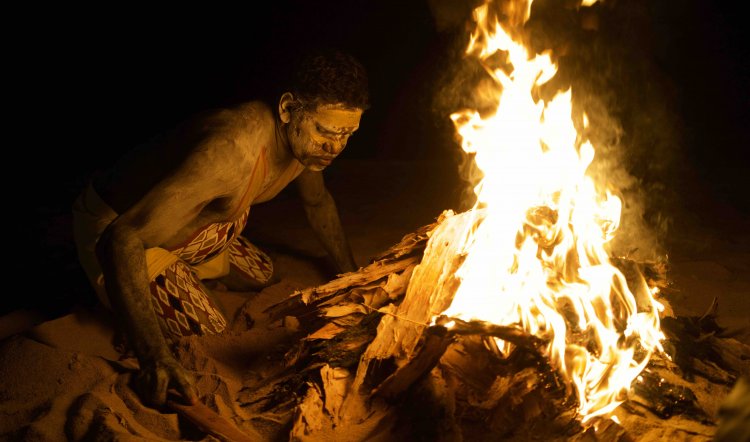 The comical yet often mournful cry of the crow (Yak) is embodied in an onomatopoeic piece, while the scrub turkey’s mischievous quirkiness is reflected in both its musical portrait and the solo dancer who portrays the bird. His part in the cleansing and renewing of life – scratching and rearranging the soil – is vividly portrayed. These pieces, adapted from traditional oral history songs, are neither lost nor misappropriated in the orchestral setting and the overlapping aural qualities are electrifying.

Dr Yunupiŋu’s own symbol – Djarrimirri (Child of the Rainbow) – is beautifully represented, musically and visually, in the use of high-flying drone-filmed portraits of Elcho: lush green, white sand, rolling waves and translucent water. It brings the audience into communion with the voice and the land and is emotionally affecting and spiritually warming.

These effects – like being wrapped in love and reconciliation – visited on the wider non-Indigenous audience is what its creator intended. Don Ganambar has written, in the Festival program, “… It points to a potential contemporary Australian identity grounded in and drawing upon the extraordinary knowledge, understanding and wisdom of First Nations People that inspires us all to listen to and care for the precious land…”