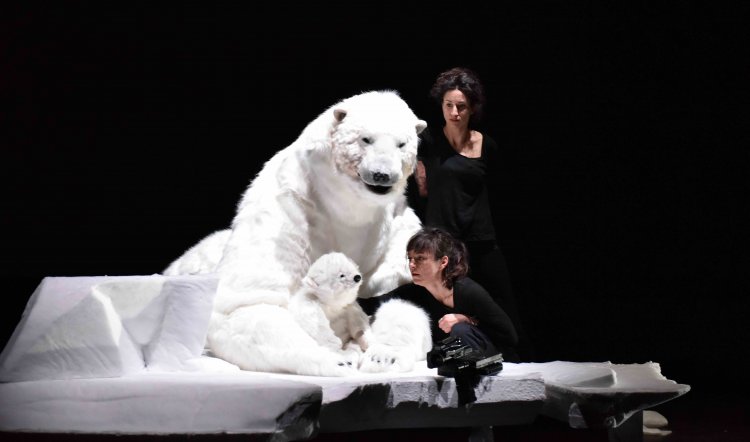 If Sunday – Dimanche – is as crushingly boring in Belgium as it always has been in the far reaches of the former British Empire, it explains why the creators of this particular theatrical universe dreamed up this instead!

Dimanche opens with a miniature vehicle, topped by an oversize TV transmitter thingy, being driven across a miniature snowy wasteland by a life-size shadowy person. Small fir trees dot this landscape, on a hill there is a cosy looking house with twinkling windows. When the vehicle metamorphoses via the magic of scene change into a full-size, decrepit old camper van, we are suddenly in the company of three documentary filmmakers, bumping across the tundra in a style reminiscent of the Keystone Cops or three stoned hippies. 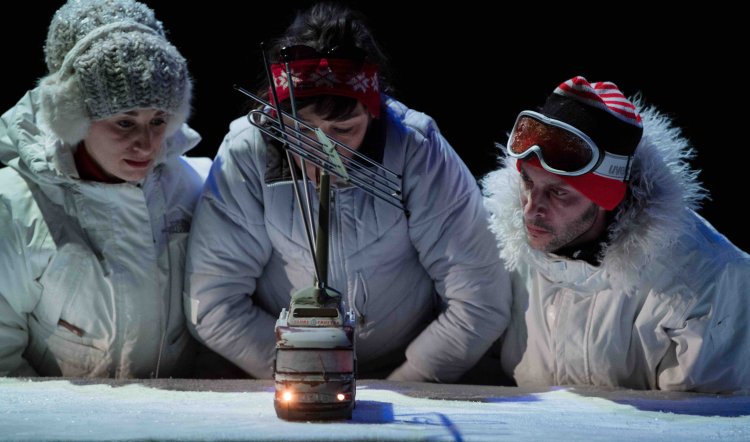 The three performers, Sicaire Durieux, Sandrine Heyraud and Christine Heyraud, of Belgium-based Chaliwaté and Focus companies, are silently accompanied by other semi-invisible puppeteers, camera, sound and light operators in a piece written and directed by them and Julie Tenret.

Further scene changes reveal their purpose: to capture on film the end of life on earth as we know it as climate change tightens its grip. The trio – sound, camera and talking head – set off across creaking ice floes, gingerly avoiding dodgy bits as the sounds of weary ice and encroaching ocean grow louder and more ominous.

Disaster strikes and, via a filmed underwater sequence, becomes a segue to another scene involving a life-size polar bear and her cub. The cub is cute and its mother is magnificent. Like each story in this Sunday, it will not end well. 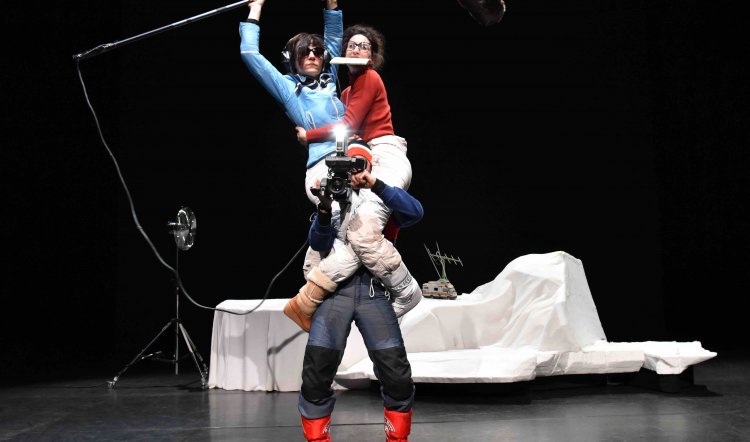 The house with the twinkling lights, from the opening moments, becomes the site of the other side of climate change: extreme heat. Granny – another cute puppet presence in a floral housedress – arrives from upstairs on a travelating chair. She doesn’t do too well despite the fans trained on her fainting form and a washing up bowl of ice blocks in which her feet are tenderly placed.

It’s the furniture that fares worst, however, a table and chair gradually droop and melt sideways in a droll but spine-chilling moment. When a gale blows through the house and takes its occupants with it, there doesn’t seem to be much hope left. Reality is a helluva thing. Yet deep in the ocean are sea creatures of great charm and visual ingenuity. A large shark cruises by. And who knew four pairs of hands could so authentically become a shoal of squid?

Dimanche runs for an hour and 20 minutes of serious ideas, glorious imagination and visual effects, and about 20 minutes too much whimsy and repetition. It’s posted as a family show with 9+ as the lower age range and the kids in our audience were definitely restless – along with me – at around the hour mark. Nevertheless, the lone woman paddling her kayak across dark and mysterious waters amid the ruins of civilisation is a moment I won’t forget.