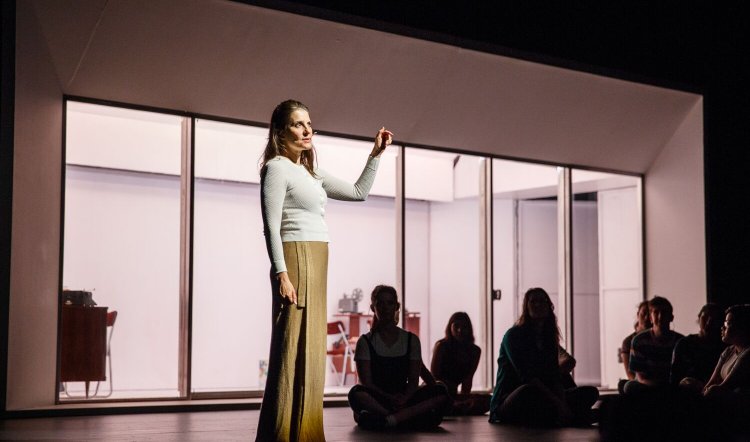 Lars Jan, the instigator of this theatrical treatment of Joan Didion’s celebrated essay The White Album, is fascinated by the past and, in particular, how it relates to the present. In the Los Angeles Times last year, Charles McNulty wrote of Jan’s preoccupation that he, “has himself sought out the secret connections between personal history and seismic societal shifts. In The Institute of Memory (TIMe) … 2015, he pursued the documentary trail left by his late Polish-born father, a mysterious Cold War operative, in the context of the contemporary debate on identity, data, and privacy in the post-Edward Snowden era.”

In The White Album, then, Jan and co-collaborator/partner/performer Mia Barron have chosen and highlighted the political and social parallels between 2020 and the events of 50 years ago, so vividly described and lived by Didion. It’s a bit of a long bow to draw – the era of maximum optimism, social upheaval, great music, and flippy murder is not immediately relatable to our present of neo-fascism, environmental destruction, and high school massacres, but let’s go with it anyway.

Unknown to the majority of the audience, a mob of 20-something volunteers are first picked from the auditorium to be wired for sound and take part in a parallel experience that only they can hear. They join the professionals on stage and pad out the crowd scenes until finally dismissed back to the dark. It’s an odd thing – they join the cast on stage at the end for the “Quaker-style meeting” during which the themes are supposed to be explored, addressed or whatever by audience and players. 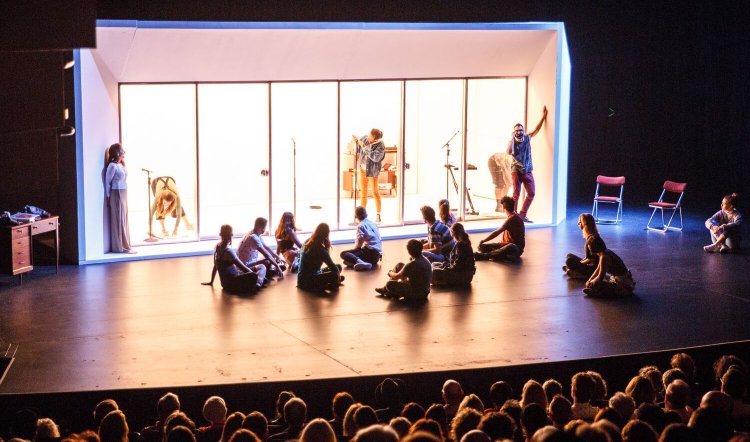 (It didn’t work that well on opening night in Sydney as an older woman immediately caused younger hackles to rise when she accused them of being “conservative” and not doing anything, unlike her generation. Really useful, lady. And not true anyway. However, there is a very good reason why God invented actors: to avoid this kind of gratuitous misinterpretation and time-wasting.)

But back to the narrative flow: Didion’s seminal essay is a short, sharp ramble through key moments and events of the late 60s in California when Black Power, The Doors and finally the Manson Gang marked a generation in disappointment and blood. All the while Didion was there, training hawk eyes on her surroundings as she and screenwriter husband John Gregory Dunne picked a living from the beautiful corpses.

The White Album is a remarkably bold and lucid piece of writing and needs no further dramatisation. It stands as a history and a life wildly led and even though Mia Barron performs an amazing feat of memory in reciting it, you have to wonder why and to what end. Over 90 minutes, the vivid words and innate drama are repeatedly undercut by the goings-on on stage. Designed by the P-A-T-T-E-R-N-S architectural firm, a stark white and glass box stands in for all settings and is at least anonymous enough to allow the spoken descriptions – of the house in Laurel Canyon, in particular – to be fabulously vivid in one’s listening mind. 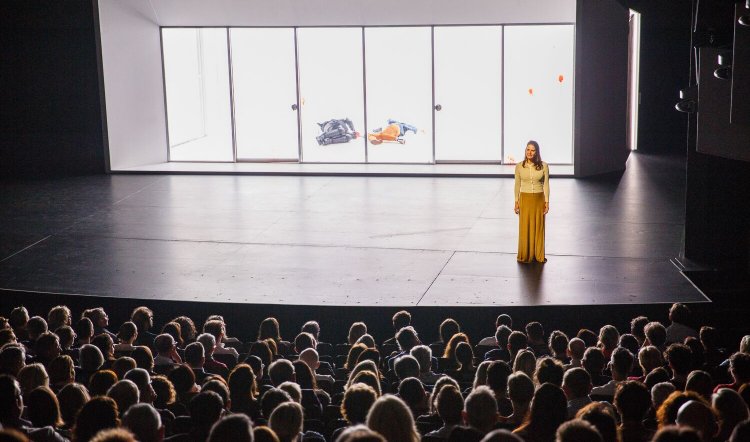 Also vibrant and visible in the imagination despite the nonsense going down on stage is Didion’s presence, “sitting on the cold vinyl floor of a sound studio on Sunset Boulevard” waiting for Jim Morrison in his black vinyl pants and no undies to finally turn up. This scene does rise above the commonplace however in that it allows Sharon Udoh to give thrilling voice to a tantalising fragment of “Light My Fire”.

The White Album, in this on-stage, acted-out incarnation is mostly reminiscent of Elevator Repair Service’s Gatz – aka The Great Gatsby – recited in its entirety and a Sydney Festival visitor in 2009. I couldn’t really see the point of that either, except that festivals are where we look for the rare, the unlikely and the unorthodox; and this is certainly that.