Opera Australia has opened its 2020 Season with a popular and resounding winner. La Boheme – one of the company’s favourites – has opened with the thrilling house debut of lyric tenor Kang Wang as Rodolfo. Australian-Chinese Wang is Queensland-trained and made his Met debut as Narraboth in Salome in 2016. The entire two-plus hours is electrifyingly worth it just to hear his  Che gelada manina.

And Karah Son’s Mimi, the dressmaker with whom Rodolfo falls instantly in love (always necessary in a lengthy opera: no time to lose). The South Korean soprano who is now a regular at Opera Australia, sings with authority and strength. Some felt she became reduced by her TB too early in the story, entering somewhat doubled up when she still had quite a life to lead both with Rodolfo and then the Viscount before succumbing to the disease.

There is very much more to this production, however. The (director) Gale Edwards’ Boheme is a masterpiece in itself. She has taken the action out of 1840s Paris to 1930s Berlin, and the social and political upheaval of the Weimar Republic and its pre-war hedonistic lifestyle. The original libretto was adapted from a popular novel of the time about Bohemian life in Paris, and the opera premiered in Turin in 1896, soon becoming a popular success.  By 1900 it had been performed in most leading opera houses and the role of Mimi was indeed sung at Covent Garden by our own Nellie Melba! 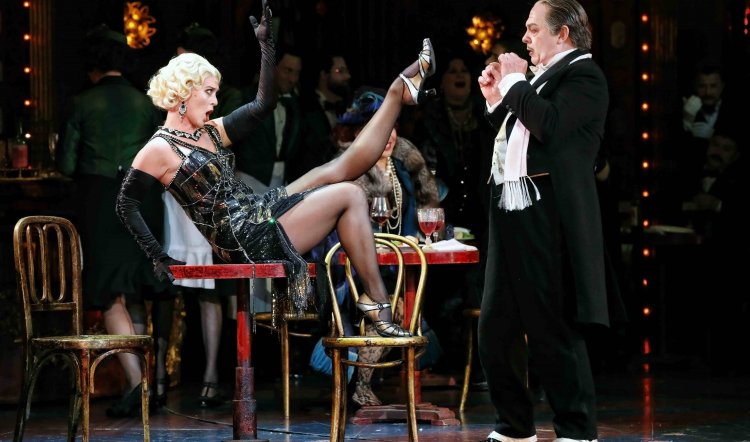 This Weimar setting is a gift to the designers who’ve seized the opportunity to introduce a lavish world of glittering fairy lights and sumptuous velvet (set design by Brian Thomson, costumes by Julie Lynch).

Musetta, the “bad girl”  of the piece, is beautifully sung once again by Julie Lea Goodwin who has played the role both in the Opera House and On The Harbour in 2018. She delivers her Musetta’s Waltz triumphantly. And her sometime lover Marcello, sung by baritone Samuel Dundas, delivers with playfulness and passion.

In 2015 Diana Simmonds wrote here of the original 2011 production:

“The Edwards bohème is a masterpiece in itself. The creative team is second to none, with Brian Thomson devising a three-in-one setting of studio-Momus/Spiegeltent-city tollgate that not only looks terrific but also works with applause-worthy simplicity. John Rayment's lighting design does tawdry nitery with wit and empathy and also provides the different spaces for the performers within the otherwise simple settings. 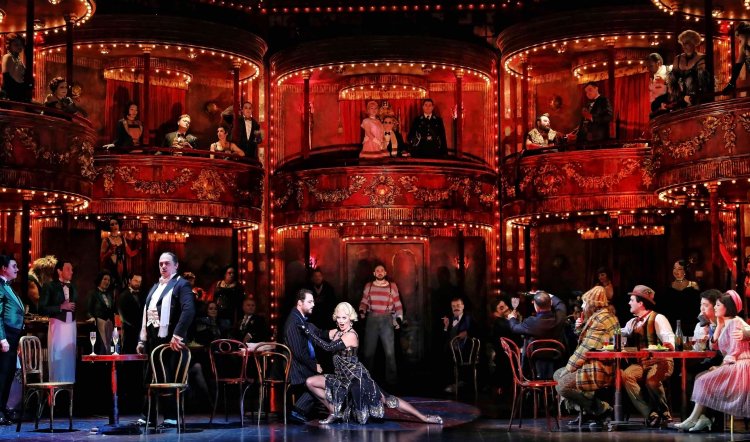 “Julie Lynch excels herself with the costumes, obviously having taken full advantage of OA's costume-makers. The lavish range of outfits, from Musetta's already famous Swarovski evening gown and the gaudy finery of the nite club gals, to the everyday stylish tat of the Bohemians – dinky pullovers and overlarge winter coats (Rodolfo and Marcello), dandyish Isherwood gear for Schaunard and so on.

“The production is a feast for the eyes… Edwards’ eye for and instinctive insistence on the fine details of a performance go much further and deeper than the principals. The result is a dramatic and emotional journey that is at times overwhelming. I ended the evening sobbing but had a truly wonderful time. Go figure.”

It remains true in 2020. Conductor Carlo Goldstein led the Opera Australia Chorus and Children’s Choir and of course our fine Opera Australia Orchestra in this much-loved opera. One can never hear this music too often and this production is a standout. And all those lucky Sydney summer visitors also have the opportunity to catch up with it too!