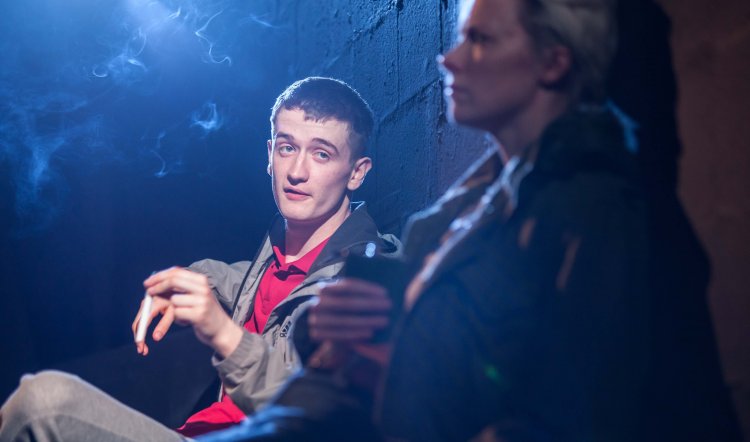 One evening, high above Edinburgh atop the Salisbury Crags, a 40-year-old, middle class woman and a working class 17-year-old lad meet by chance. In Kieran Hurley’s thrilling play from 2019, they initially have little in common, including language. Libby (Shauna Macdonald) is softly spoken, well educated; Declan (Angus Taylor) speaks in a brogue thicker and more impenetrable than a deep-fried Mars Bar. Against the odds they move from initial, understandable antagonism to wary and unlikely friendship.

Directed by the Traverse’s then outgoing director Orla O’Loughlin, Mouthpiece has been seen as both a gift and a whack around the chops to the famous theatre’s culture vulture patrons. As it unfolds over 90 minutes, quite how and why becomes apparent. The play is, in part, a critical analysis of writing for theatre. It’s Drama 101 in ways that are at once practical and, in this context, tongue-in-cheek and unexpectedly illuminating.

Libby was a once promising and briefly successful playwright. She hasn’t written a word in years since being discarded as the Next Big Thing and realising what a crock it had been all along. She is in despair and when Declan first finds her on the edge of Salisbury Crags (an extinct volcano btw) her misery is extreme.

In describing her plight to young Declan the social chasm between them is revealed as wider and more excruciatingly comical than can be easily described. Libby can’t write, has returned from London with her tail between her legs, and is living back with her indifferent mother.

Declan yearns for light and expansive horizons in his dark and narrow life. He draws and paints – beautifully, Libby sees – but has never been to an art museum and cannot comprehend that he might be permitted to go inside such a place. 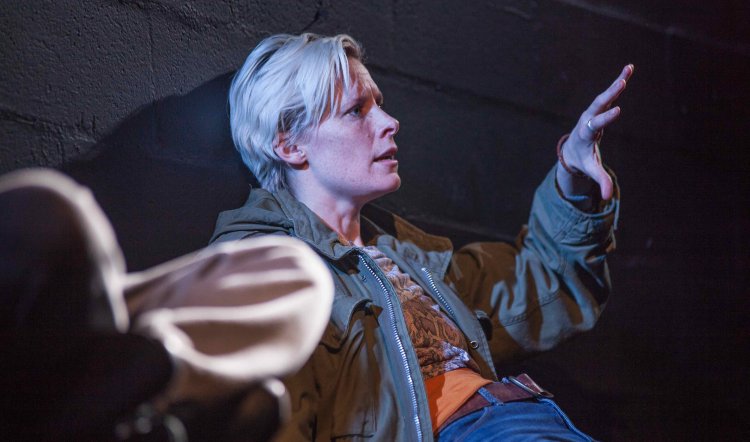 She is fascinated by his stories of an under-class, sink estate life – as alien to her as if he is recently arrived from another planet. And as stories are all she has ever had or understood, she is inexorably drawn to his. In wanting to help him she begins, inadvertently, to colonise his life and his all-important words, in a record that soon becomes a new play.

The interaction between the two is punctuated at intervals by Libby speaking into a microphone. She describes where the action has arrived at in properly-structured playwriting, and where it will need to go to be a properly successful play. That there may be twists and turns and the unexpected are a given and Kieran Hurley’s script is exhilarating in its intelligence and wickedness.

Mouthpiece is played out on a stark, dark, four-tiered set, framed in white with a table and chair out front – they end up spending a lot of time in a New Town cafe – all of which concentrates the attention on the two actors (set and lighting design: Kai Fischer). An intermittent electronic soundtrack (composer and sound designer Kim Moore) further punctuates the action.

The wretchedness of Declan’s young life is eye-wateringly different than Libby’s existential angst. He shares the tenement dwelling with his mother and small sister and Gary, his mother’s current boyfriend. It’s violent and hopeless. Declan is generationally unemployed, unemployable and unseen by polite society. It’s all rich pickings for Libby – not that she, in all sincerity, sees it that way.

The emerging play – their play – grows along with the affection between them. Nevertheless, the inevitability of that is not allowed to slide for one moment towards the predictable or the sentimental. The title of the play, that of course becomes her play although he will be acknowledged, she reassures him is an irony: Mouthpiece. She is his, whether she intends it or not, and the artwork that first drew her to him depicts a yawning maw that might consume or be consumed by all around it. 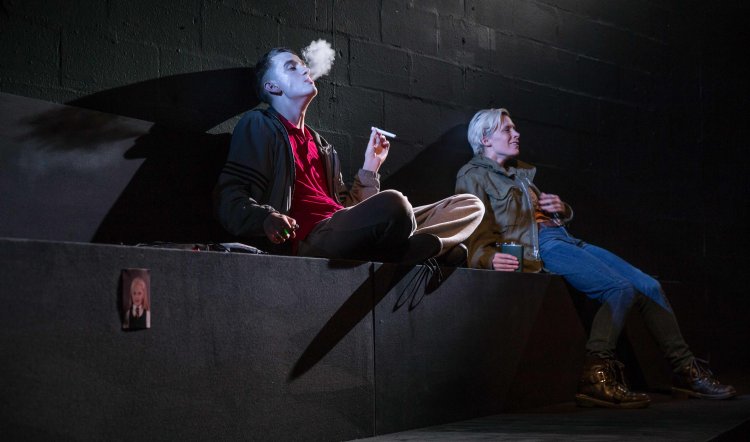 The most confounding thing for an Australian, or indeed any audience from beyond Edinburgh’s under class, is deciphering Declan’s speech. Whether an impassioned rant or just a gently stoned interchange between the two, it’s almost impossible to follow in any detail. After a while you realise you know what he’s saying anyway – if you listen. And then a sharp realisation dawns: here we are, an agreeable, middle class audience, listening in bewilderment to a member of the great unwashed and politely trying to figure out what it’s all about.

How often does this happen in this country in everyday exchanges between white and Indigenous Australians? Although it’s as far removed as it could be, Mouthpiece is actually our society in microcosm and delivers a shock possibly akin to the slap felt by the first Traverse audience!

Director Orla O’Loughlin maintains a gripping pace while allowing plenty of space for the humanity of both characters to emerge. Angus Taylor is apparently still a drama student yet his portrayal of Declan is rich, eloquent and nuanced: unforgettable.

Shauna Macdonald is tasked with tricky switches in and out of the play, the play within the play and back to the Traverse – “It’s meta” as Declan comments – and she is credible and appealing even as Libby’s arc becomes uncomfortably warped.

The final scenes are hilarious and horrible – and embarrassing if you’ve yet to lay down preconceptions and class prejudice. Amazing play and beautifully realised.