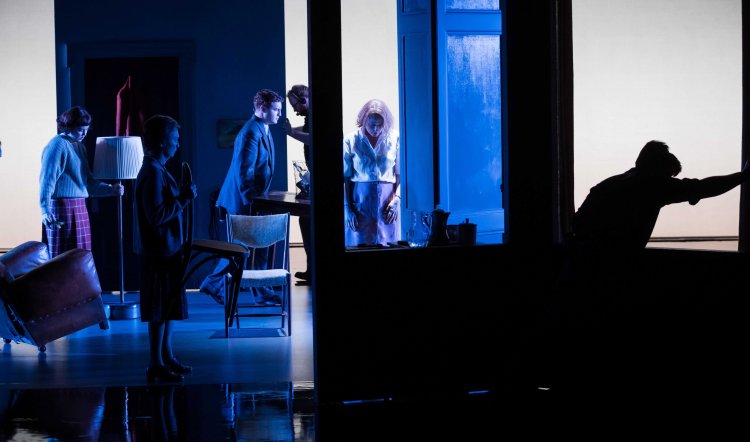 Director Paige Rattray has made a fascinating production of Terence Rattigan’s The Deep Blue Sea. It was written and first staged in 1952 in a London still much affected by WW2. Although the global conflict ended in the autumn of 1945, its reverberations were still powerful and central to the play.

For instance, a “ration book” is mentioned, without which everyday necessities such as petrol, bread, eggs and milk were unobtainable. British children had never seen a banana or an orange, and food rationing continued until 1954.

Rattigan served as an RAF rear gunner – a “tail-end Charlie” – life expectancy of weeks. And Freddie Page (Faysal Bazzi) is an ex-RAF fighter pilot: another occupation with shocking survival rates. Freddie is a dashing chap but what we now recognise as PTSD means he’s turned to drink and is incapable of emotion – other than wild gaiety or anger.

None of this has stopped Hester Collyer (Marta Dusseldorp) falling in love with him. She has left her high court judge husband, Bill (Sir William, Matt Day) and thrown convention and polite society overboard to live in sin in a rented flat.

The production is a creatively cunning one. It opens on a vast, empty stage, peachily-lit as if at dawn (lighting design Nick Schlieper). In the centre of the expanse is a silhouetted prone female figure. As the ambient light becomes the luminous blue of the stratosphere, elements of the set are trundled on, pushed and swung around in a choreographed, plainly non-realistic scene (designer David Fleischer). 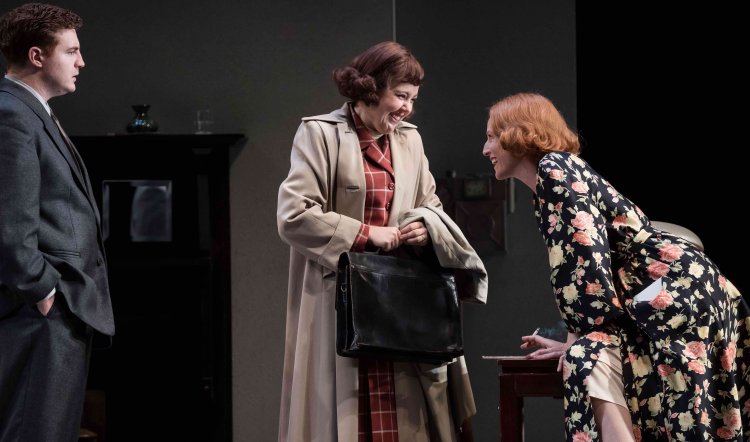 Beneath their muted rumbling rise sounds that might be concrete cracking, society disintegrating, lives collapsing. The imagination is further loosed when Maurice Jarre-ish musical fragments underpin or counterpoint other scenes (composer and sound design James Brown).

When the flat is assembled, the body is lying in front of an unlit gas fire, the smell of which has alerted upstairs neighbours, lower middle-class Mr and Mrs Philip Welch (Brandon McClelland, Contessa Treffone). They dash in and make slapstick and therefore shocking efforts to save upper middle-class Hester – masquerading for propriety’s sake as “Mrs Page”.

Class is everything and Rattigan makes sly reference to it when he has Mr Welch earnestly tell Hester why the gas stopped flowing. She failed to put a shilling in the meter; her subtle bewilderment tells us she has not a clue about either shillings or gas meters.

Before this, however, Mrs Welch has added to the class stratification by summoning yet another tenant, Mr Miller (Paul Capsis). He is a “doctor” and administers unusual treatment to rouse Hester from her comatose state. The commotion also brings in landlady Mrs Elton (Vanessa Downing) whose own dubious social position is somewhat elevated by her job, and an ailing husband – also Mr Miller’s patient.

Adding to Hester’s discomfiture and the almost farcical comings and goings, her husband arrives. Bill was summoned by Mr Welch who is nothing if not a stickler for the etiquette of attempted suicide. At the time it was a prison offence, as was homosexuality, and Rattigan knew only too well the perils of both after the suicide of a lover. 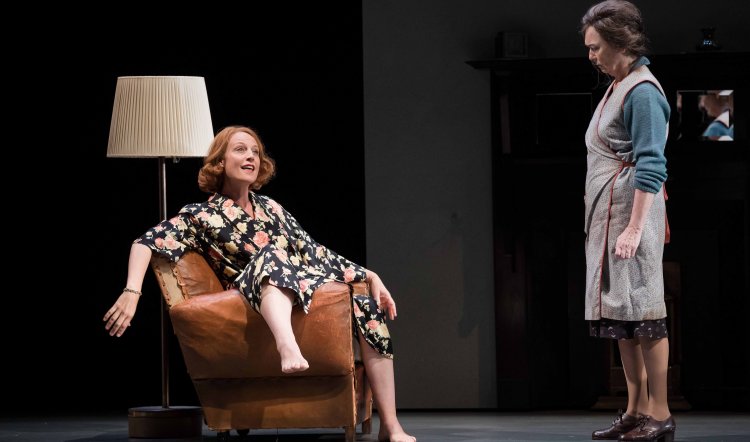 The pressures swirling around Hester are palpable as her husband repeatedly entreats her to return to her rightful place. At the same time, she knows Freddie does not and cannot really love her and is desperate to escape his guilt and a life stunted by war. Beyond the dubious sanctuary of their flat, Hester is also faced by the starker reality of post-war Britain.

As a well-to-do wife, she has no experience of independent life. She has no work experience and anyway, women had to surrender jobs to the returning men. And finally, her position as an adulterer and divorcee means social ostracism and probable destitution. Small wonder she turned on the gas.

For a number of reasons, however, Mr Miller is already an outcast and Rattigan gives it to him to eventually point Hester in a new direction. What will happen is not spelled out and the glimmer of redemption is only as bright as a gas flame. The play’s two hours, making up one long day in Hester’s life, are filled with nuance, drama, despair, and humour. Marta Dusseldorp is central to it all and is quietly, rivetingly magnificent.

The strong supporting cast is evidenced in the late, brief appearance of Charlie Garber as Freddie’s what-ho RAF pal, and in Contessa Treffone whose every moment is marvelous. Vanessa Downing brings yet more depth and subtlety while, in their social positions as polar opposites, Brandon McClelland and Matt Day are pouter pigeons of rectitude. The nervousness of opening night seemed to get to Capsis and Bazzi but both settled into their roles and places by interval.

The Bridges of Madison County