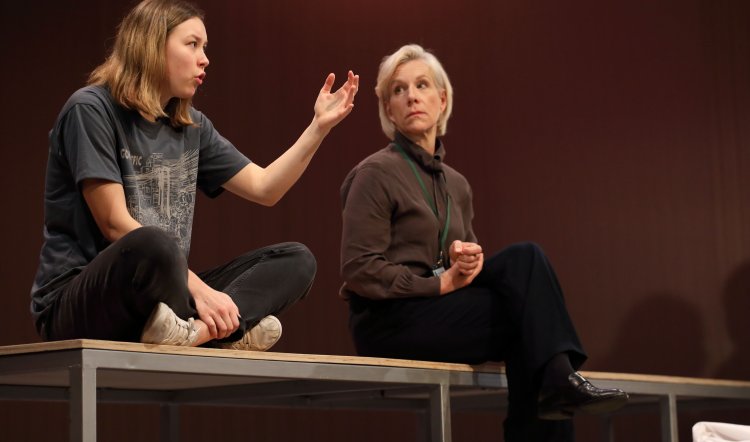 Arthur Schnitzler’s 1912 play Professor Bernhardi is the basis for Robert Icke’s “very freely adapted” The Doctor. The original was set in 1900 Vienna and focused on the anti-Semitism then rising in Austria. Icke brings a similar sense of foreboding to the UK now and also broadens his purview to the muck oozing from social media: trolling, bigotry and ignorance.

The same can be said of Australia today in the federal government’s push for “religious discrimination” legislation, the burgeoning hate industry against women, LGBTQI people, Jews, Muslims and - today (March 1) – Hindus. In The Doctor, the prey is secular Jew and eminent medico Dr Professor Ruth Wolff (Juliet Stephenson).

Wolff is director of a private neurological institute specialising in treatment and research into Alzheimer’s. Fate brings to her emergency room a 14-year-old girl dying of sepsis following a botched home abortion. Wolff is a doctor, as she repeats throughout the play “let’s be crystal clear about this” and everything else in her life is secondary and that includes her own humanity, her long-suffering partner Charlie (Joy Richardson), and her colleagues, played with disregard for race or gender, by Nathalie Armin, Paul Higgins, Mariah Louca, Pamela Nomvete, Daniel Rabin, Kirsty Rider, and Naomi Wirthner.

There are rivals, allies, fans and others who find her brutal manner appalling. Her nickname is “BB”: Big Bad Wolff. But she is on familiar terms with the Minister for Health – once her protégé and she is on track for a Nobel Prize.

The dying teenager is a Catholic, however, and her absent parents have instructed their local priest (Jamie Parker) to administer last rites. But Wolff will not permit it because this is not the girl’s wishes. Her patient is peaceful and not frightened, and she wants the unfortunate girl to stay that way. She can see no reason why she should break the ethical covenant for the priest. 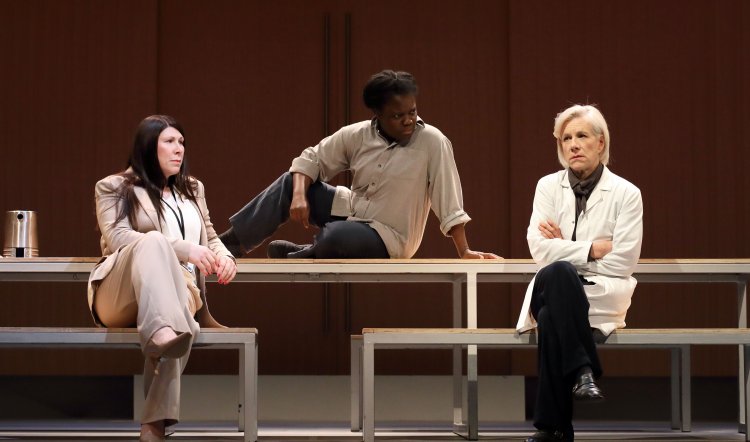 Added to this explosive mix of toxicity are the crucial government funding for a new building that hangs in the balance, the appointment of a new deputy – should they be Christian or Jewish? And Wolff’s obdurate refusal to play politics. For her, science and medicine are pure and cannot be sullied by compromise.

This last trait would have, in real life, disqualified Dr Wolff from her position before she ever achieved it. Might it have worked in earlier, more honourable or innocent times? Maybe, but it’s a gaping hole in the play’s contemporary credibility.

Played on a sparsely elegant set of a pale timbered conference room (design Hildegard Bechtler, lighting Natasha Chivers) the previously corralled medicos on her team, “we are a team”, begin to circle like wolves when they scent blood. A petition is launched and goes viral – a term the linguistically OCD Wolff despises. She is quoted out of context by news and social media. Within days her reputation as a hero is in tatters and her alleged anti-Christian bias is being shrieked from the pulpits, secular and otherwise.

It’s a nightmare and anyone who has been trolled and bullied in recent times will recognise the horrors. As the arrogant, then bewildered, then disbelieving, and finally broken doctor, Juliet Stephenson is magnificent. She is never offstage over two hours and 45 minutes and rarely not the centre of attention, hostile and worse.

The only real kindness Wolff enjoys is rare moments with Charlie, who nevertheless lives in the closet and is, therefore, less than fulfilled; and with a neighbouring transgender teenager (Ria Zmitrowicz) for whom Ruth is an unlikely friend. 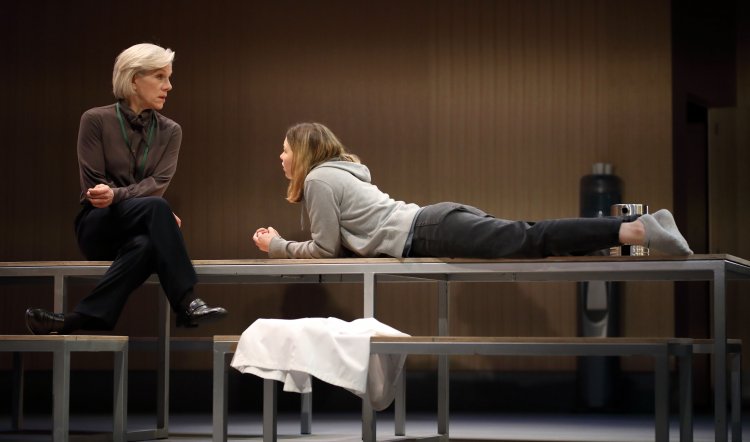 Above the conference room, partly hidden by the lighting rig, a small platform holds a full drum kit. From there Hannah Ledwidge inserts percussive commentary ranging from right-across-the-kit fusillades when Wolff is at the end of her emotional tether, to almost imperceptible interventions in the events causing palpitations and worse in the room below. Together with sound and composition from Tom Gibbons, it makes for an unusually strong aural element.

In the second half, when the embattled doctor agrees to front a TV debate show, the looming disaster is apparent to all but her. The way it’s set up is truly disturbing as “experts” sit safely behind a long table to confront their victim, alone on an upright chair. An unctuous host – cutely doubled by Oliver Alvin-Wilson and also an Institute top dog – leads the ambush and the doctor walks into the trap. It’s made soul-strippingly painful as her face is projected on huge screens. The cornered woman has no hiding place.

It’s in this crucial showdown, however, that the script is less than rigorous. Icke favours a few cheap laughs for what has to be, in almost all instances, a white middle-class audience. The notions of unconscious bias and racism are aired but provoke sniggers rather than challenging the gigglers to think about themselves. Modern religious bigotry is also gently stirred into the mix of racism and post-colonial discrimination to make a curdled social omelet. The after-taste is unpleasantly disappointing.

Also detracting from the overall power of the piece is audibility. Stephenson is mic-ed from time to time for effect but is otherwise clearly audible. Not so with some other cast members who garble their lines through mouths full of marbles – so it seems. And that’s a pity for a play that’s both text-heavy and about the words and ideas. Yet, Juliet Stephenson is something to behold and savour.