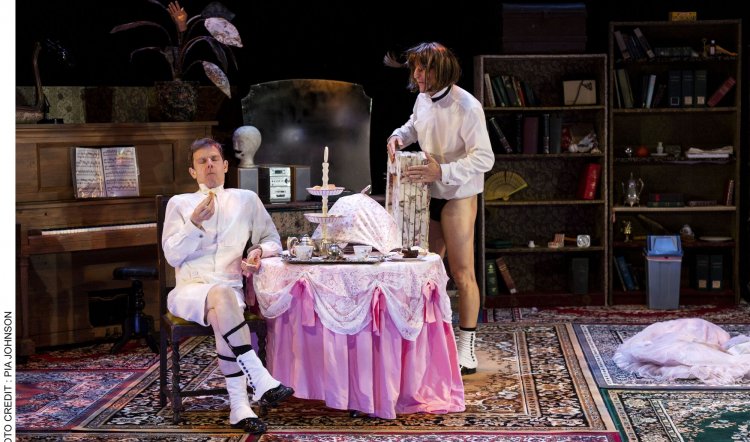 THE IMPORTANCE OF BEING EARNEST, Merlyn Theatre at the Malthouse, 14 February-8 March 2020. Photography by Pia Johnson

Oscar Wilde’s oft-presented and well-known play the Importance of Being Earnest (“A Trivial Comedy for Serious People”) as presented by the much-loved Ridiculusmus group is a hoot.

Adapted by Jon Haynes, Jude Kelly and David Woods, this production heightens Wilde’s narrative of class distinction and the deceptive ease of lying through brilliant comedic timing and buffoonery.

Hard to believe, but the play of nine characters is now a two-hander. Haynes and Woods play all the characters with deft costume changes. Haynes the straight man to Woods’ buffoon, the show originally directed by Kelly.

The marvelous set, on a floor of clashing, jigsawed “Persian” rugs, is an array of mismatched cupboards, bookshelves, an elderly upright piano, wallpaper and boxes, and elderly occasional lamps. All of it allows Haynes and Woods to spirit away and retrieve wigs and frocks. There is also a cut-out, expandable, painted floral garden hedge – yes, really – and some deft hand puppetry. 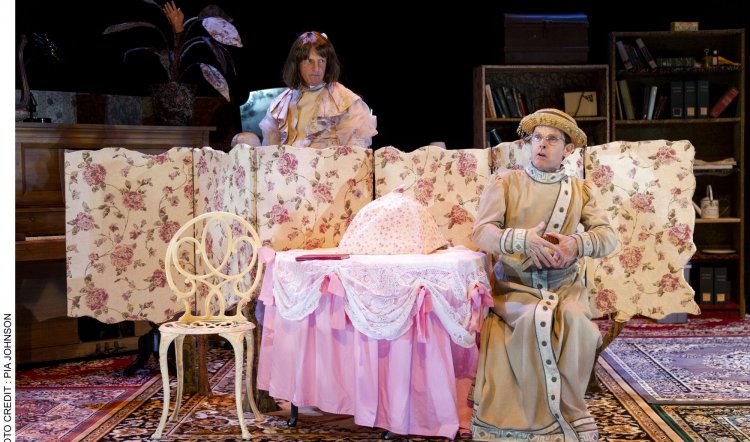 They each wear spats over black patent leather shoes – no matter which one of a kaleidoscopic selection of costumes is being worn – and together with their brazen skills at suspending disbelief, and you have highly-honed mayhem. (Set and costumes designed by Zoe Atkinson.)

Moving on, his Gwendolyn is breathy, achingly British upper class, and wonderfully demure. S/he is pitted against Woods’ over-excitable Ernest who is intensely engaging and hysterically funny. The juxtaposition with Woods’ Cecily – all girlish and pouting – creates the tangled web for Algy. Then there is Haynes’ precisely-articulated Miss Prism, and Woods’ salacious Vicar Chasuble.

Algernon and Ernest set the scene for love and fibs as we wait for the entrance of Lady Bracknell and the story of the handbag. Haynes’ timing here is impeccable it is impossible not to break into tear-streaming laughter.

The second half descends into a well-rehearsed mixing up of wigs and frocks with Woods breaking the fourth wall when he can. His elasticity of face and limb and his rambunctious playfulness are utterly brilliant. 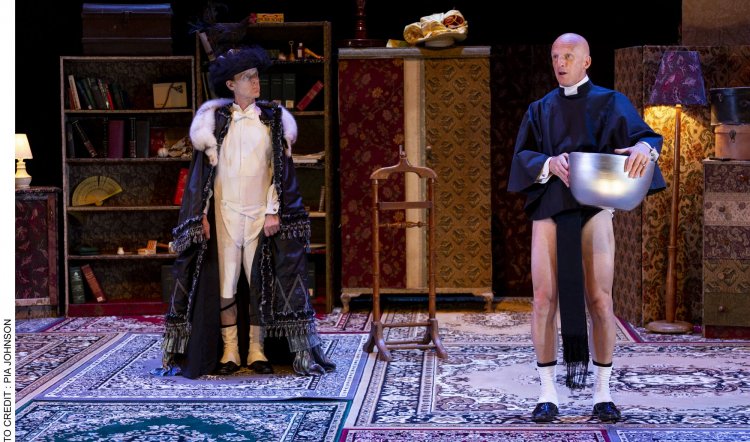 Yet even with all the havoc Wilde’s words are not lost. The affected snobby vernacular of the time is a joy to listen to. Wilde was wickedly deliberate in his portrayal of class; Lady Bracknell’s list of requirements for a husband would preclude many.

This version of The Importance of Being Earnest is a testament to the collective imagination of the adapters, also to the play and to the art of lying or as Wilde put it “lying; the telling of beautiful untrue things is the proper aim of art”.

Ridiculusmus make it a night not to be missed.