The saddest thing about this marvellous collection is to realise how disrespected Clarice Beckett was in her lifetime and - in the presentation of the exhibition - how disrespected she is again, albeit inadvertently and with the best intentions.

A much-vaunted feature of the opening weekend (and the closing one in May) is a commissioned “aural response” to the works by violinist Simone Slattery and pianist Gabriella Smart. The effect is as emotionally manipulative in apparently attempting to suggest what to think and feel as a schlocky movie.

Leading the viewer(s) by the nose might be good for business but it’s damned irritating to others. “I’m just going to turn down the sound now as the violinist is coming through with her group. I hope you don’t mind,” said a smiling docent to those watching a filmed interview with the heroic Dr Rosalind Hollinrake.

“I do, actually,” I said crankily because Hollinrake is so much more important and interesting to listen to, having saved so many Beckett pictures from destruction. She is also the force behind the artist’s place in the Australian modernist firmament and instrumental in the gathering of these 130 works now on display in Adelaide.

In her lifetime, Beckett was disregarded and disrespected primarily by her suburban bank manager father. She then spent most of her too-short working life being misunderstood and disrespected by an establishment unwilling to come to grips with her muted genius. 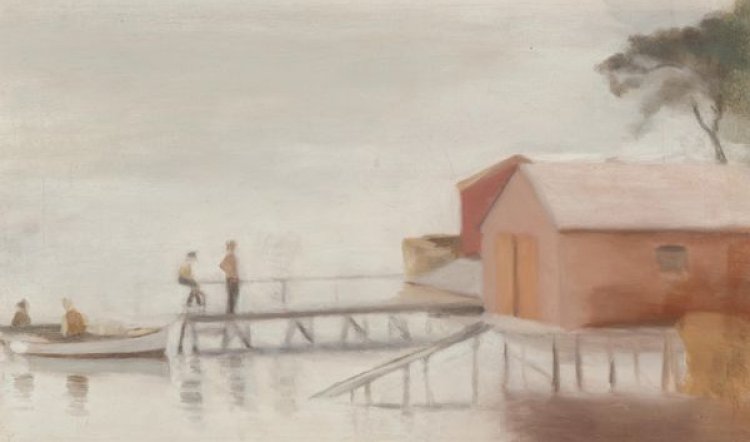 Ironically, the design of the exhibition also mirrors the distraction of the aural aspects. In various rooms, there are permanent sound effects. In one, waking birds cheep and chatter, yet the pictures brilliantly illustrate early morning in Beaumaris or elsewhere in Melbourne. In another, where Beckett’s poignant ability to make traffic, vehicle headlights and street lamps into vivid moments in time and light, this is underlined, in case we hadn’t figured it out, by the sound of a tram clanking and its bell ringing.

A further clue that still no one really trusts the work to be as mesmerising as it is, are the galleries. They are many different colours and if that’s not enough, a peephole is cut in one wall and coy archways lead from one room to the next. And, lest we are unable to imagine the kitchen where Beckett did so much of her painting, an incongruously unlikely kitchen sink unit, window and brick wall have been inserted to assist.

Instead of a wandering violin and Everage-style colour scheme, someone should have said: “Trust the work!” Instead, she is dissed yet again. Nevertheless, with two exceptions - sketchy representations of the ballerina Anna Pavlova that tell us Beckett was no Degas - this collection is mostly simply exquisite when not also intellectual, tonal and compositional masterpieces.

Their size - none is larger than could be easily tucked under one arm - is significant in the Beckett life. She trucked her gear on a small, homemade handcart and rarely painted anywhere beyond where she could walk in the mean amounts of time left to her in days busy with the domestic duties of the family home. She spent a short period on a country property and that allowed her the novelty of a fresh perspective: the upper level of a shearing shed.

The rest of her life was spent on the ground on the streets and beaches around Port Philip Bay and St Kilda and she died at 48. For reasons unknown her father then burnt hundreds of paintings, the rest were stored in a shed on the same property where she had previously wrought magic with horizons and light. 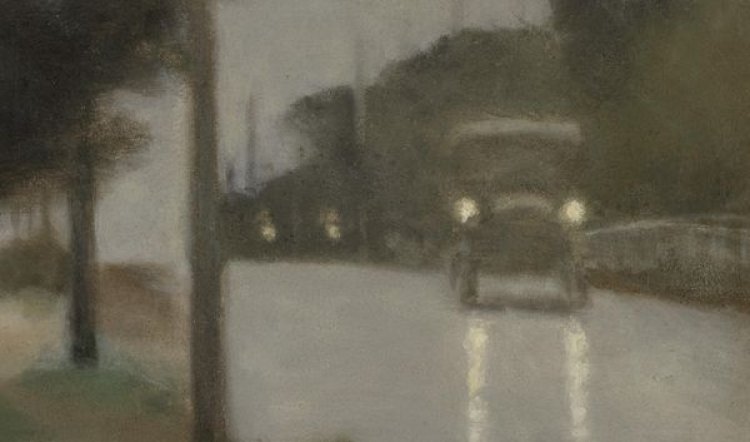 These pictures were forgotten for 35 years until rediscovered by Dr Hollinrake. She rescued 369 canvases and some are in the exhibition along with others from state and private collections. Her own 21 works were recently acquired by benefactor Alastair Hunter and presented to AGSA in memory of his mother Elizabeth.

The show is organised to illustrate a day in Beckett’s life. She rose early to do what she must before dragging her cart to a favourite spot to capture the morning light on mist, rain or even sunshine and then returning home to more chores before again slipping out for sundown.

There are streets, beaches, city lights, puddles and wet tarmac. Human figures are fleeting presences, as is a motorcycle and sidecar. Beckett makes enchantment out of the mundane and with a minimal palette that becomes more impressive with each passing hour of this “day”.

She was barely acknowledged while she lived and is reminiscent of so many women artists in Australia and elsewhere. If it were not for another remarkable woman, it is likely she would have been lost to history. With persistence as great as that of the artist, Dr Hollinrake finally mounted an exhibition in 1971 and gradually Beckett became noticed. Betty Churcher, another great woman of Australian art, named her as a “director’s choice” during her reign at the NGA in Canberra and Beckett’s reputation has continued to rise.

This exhibition, despite irritations that have nothing to do with the works, tells us why Clarice Beckett is one of the great figures of Australian modernism. Don’t miss it.