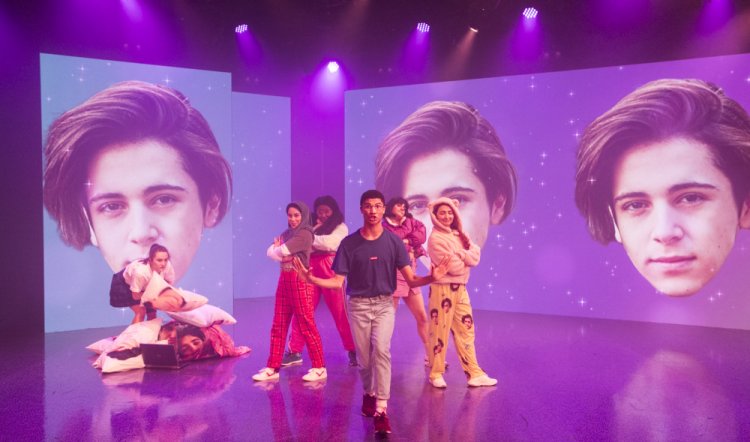 Fangirls is the musical theatre phenomenon that apparently burst out of Belvoir Street, fully formed and roaring in 2019. Like most overnight sensations, it was actually the result of five years love and labour by a lot of people. Now, in its third incarnation and in the Adelaide Festival’s sizeable Ridley Centre, it’s obvious why there was such a fuss and why it continues.

Fangirls is the brainchild of Yve Blake, who also played the lead role in the first season. She is behind the book, music and lyrics and it’s a phenomenal achievement, albeit flawed. It’s essentially a celebration of teenage girls and their obsessions, as well as a clarion call to those same young women to wonder why they are so derided and otherwise put down. (Too) late on, it’s also a deeper examination of why it’s so and what they might do about it.

Edna – Eddie – (Karis Oka) is a “full scholarship” girl, her mum (Danielle Barnes) is a single mother-nurse in scrubs and they don’t have as much money of things as Eddie’s two besties, Jules (Chika Okogwe) and Brianna (Shubshri Kandiah). Like most of her peers, Eddie is crazy about Harry (Aydan), the leader of boy band True Connection. However, Eddie is like literally crazy about him and like literally decides to do something about it. 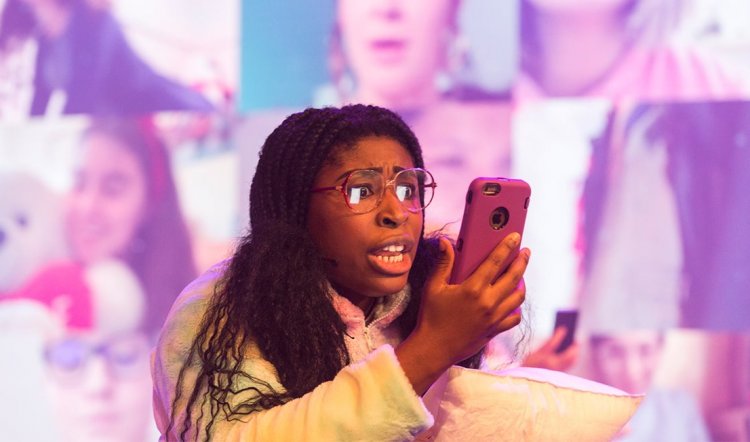 The most appealing thing about Fangirls, aside from its non-stop music and energy, is the pinpoint accuracy of Blake’s portrayal of teenage female concerns and problems. She is hilariously and excruciatingly on the money and reveals with dazzling clarity that these angsts and horrors haven’t changed in generations.

What is a bit different than, say, 40 years ago, is that the writing of fan fiction has grown Medusa-like thanks to the internet and the ease of global connections. When Eddie starts a fan-fic blog in which a character remarkably like herself stars alongside Harry, it’s not long before she has a worldwide group of fans herself, including Saltypringl (James Majoos).

What happens in the second half (the show runs two hours, 30 minutes including interval) is the stuff of dreams that quickly become nightmares when the actual consequences of fantasy aren’t considered. It results in a darker, weirder ride that’s an interesting disconnect from the poppy, zappy first half. However, it’s neither dark enough, nor bonkers enough to ring as true as a dark, bonkers fantasy needs to do in order to convince. 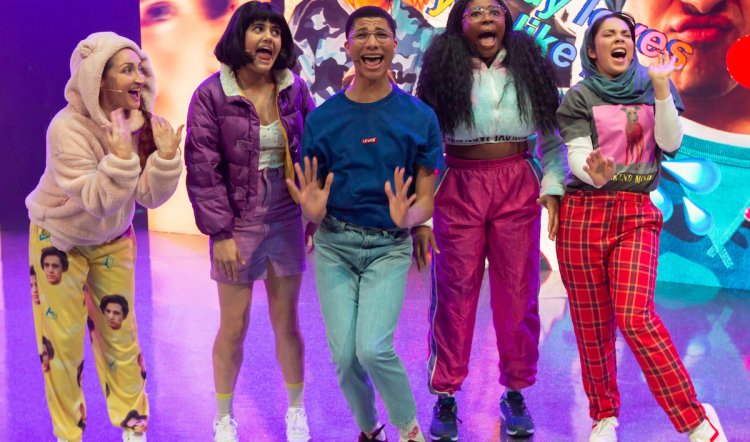 Overall it’s too long. There is sufficient repetition in the first half to make a cut of 10 minutes unnoticeably beneficial. And some more dramaturgical work on the second half would undoubtedly lift the very obvious lapses in audience attention. Nevertheless, with the rest of its strong and committed cast – Ayesha Madon, Tomáš Kantor and Shannen Alyce Quan – and firm, imaginative direction by Paige Rattray, Fangirls is a delicious achievement.

The Ridley Centre auditorium has been transformed to approximate a bigger versions of the Belvoir stage and it might be that which muddies the sound (musical direction: Alice Chance) and song delivery, which is a pity because the lyrics are witty and important to the story. The tongue-in-cheek choreography (Leonard Mickelo) pokes knowing fun at the cynically sexualised “sincerity” of the boy band phenomenon – to the point where it can be said, without irony, “Well he had it coming, didn’t he, dressed like that, behaving like that…”

In other words, Fangirls is a joyous, irreverent paean to teenage girls that is impossible not to love, age no barrier, although it helps to be able to admit one was also once a teenage girl and was much like Eddie and her mates. Not to be missed.