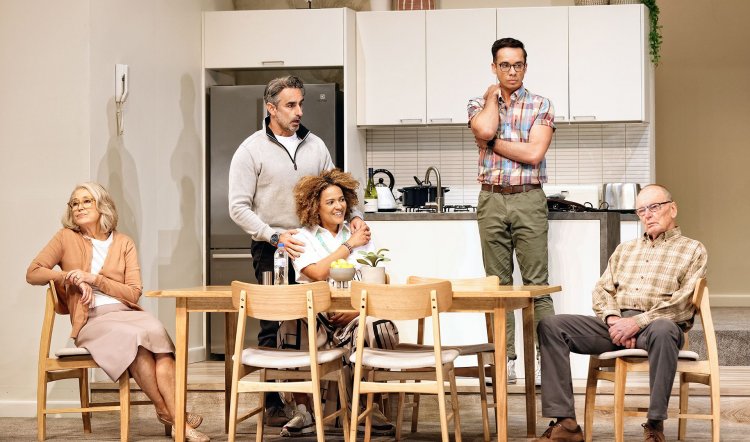 The intentions of this production of Bess Wohl’s 2019 Tony-nominated play are brilliantly encapsulated in the opening moments by director Jessica Arthur and set designer Renée Mulder. The auditorium’s darkness is gradually dispersed as the curtain rises so slowly it causes ripples of nervous giggles around the audience.

What is revealed – cheekily, at this glacial pace – is a spacious kitchen-dining-living room of elegant blandness. It’s all middle-class white and neutrals, yet unexpected colour is present in incongruous details that hint at more complex lives.

On the coffee table is a Wembleyware vase of pearlescent kitschiness. On the walls are semi-abstract paintings of koi. There are many paperbacks and a magazine stand where a copy of Gourmet is visible. On a shelf above the stainless steel double-door fridge is a fan-shaped branch of whitened coral. It’s museum quality and probably illegal – how did the elderly pair silently moving about this space come by it?

Questions are set aside as Nancy French (Linda Cropper) and Bill, her husband of 50 years (John Bell), discretely prepare for dinner. They lay out placemats, table napkins, cutlery, dishes, wine glasses, a bottle of white, a trivet, and on it she sets down a Dutch oven. 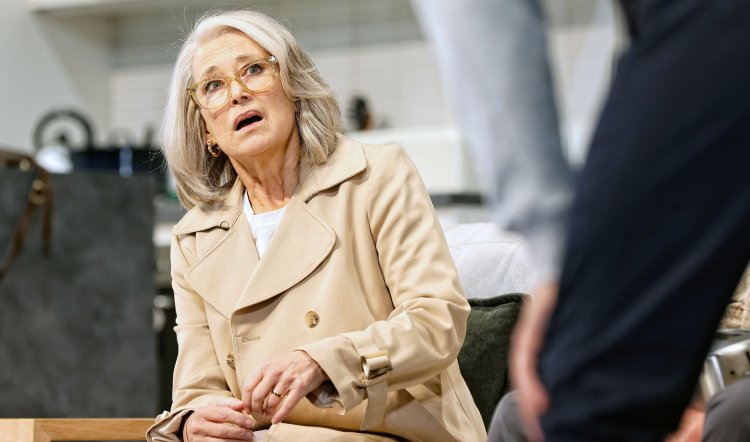 Their familiarity with this ritual is as obvious as is their automated indifference. She serves the casserole. They begin to eat. The atmosphere is as beige as their lives. It’s shockingly funny and uncomfortable: there’s a lot of recognition in the theatre. Their first exchange of words is so unexpected and awful in its mildness it causes audience gasps and a double burst of straight-up wild laughter. This pair of comfortable old shoes is going to get divorced.

Nancy and Bill have two grown-up sons – not adult, you’ll notice – and they arrive to deal with the errant parentals. Ben (Johnny Nasser) is professionally and financially successful and mindful of his position as the elder brother. Bratty Brian (Guy Simon) is also mindful of Ben’s self-appointed status and resentful as hell. At the same time, professional mindfulness and homilies are supplied by Ben’s heavily pregnant wife Jess (Zindzi Okenyo), a couples therapist,.

In a 2020 interview in Forbes magazine, Beth Wohl said her idea for the play came from the number of friends expressing shock at their parents breaking up. “I was keenly aware of what a huge trauma it was for them, even though they were obviously adults.” Her inkling that there was something unusual going on proved correct: she discovered it has become such a thing it has a name: Grey Divorce!

Wohl’s play is that rare and welcome beast: an intelligent comedy of unusual depth and manners – bad and good. It isn’t merely a collection of zingy one-liners, but is properly funny and witty, and also relies on a top-notch cast and director to pull it all together. The characters are three-dimensional and well-served by the script. Each gets to shine individually yet, as an ensemble, there is humour and heart to keep the audience buzzing and rapt. 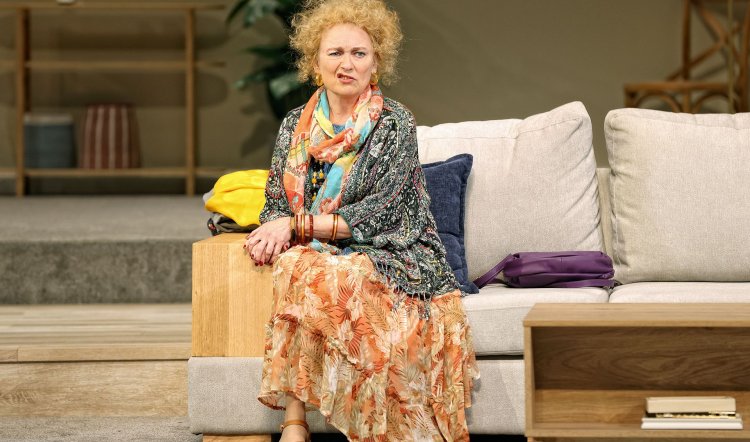 The first half ends with a bang of uncommon effectiveness and sets up a change of pace and outcome that only seems right after the event. Linda Cropper is subtle and superb as Nancy. She is the Town Mouse that roared and reveals more to son Brian about her secret sex life than any child wants to know about his mother. Never mind that the audience has already discovered Brian’s own sex life in the form of a deliriously funny, fumbled hook-up with Tommy (James Majoos).

Meanwhile, John Bell corners the market in a kind of peevish self-containment that somehow morphs into poignancy as the many layers of this grumpy onion are peeled back. That his own secret life turns out to be Carla, a deceptively ditzy bubblehead from a nearby elders’ facility (a typically twitchy and glorious Vanessa Downing), is yet another aspect of a play that delivers in spades throughout its two and some hours.

The junior cast members are all splendid and their comedic vivacity and ability to fully inhabit their roles means there’s not a laugh nor acid-tinged or melancholy moment missed throughout.

Grand Horizons is anything but and the irony of the title is as excruciating as it’s also clever and consistently funny. Recommended without reservation.