At last, they have arrived: the figures from US history that we may recognise as names but probably not as much more: Lafayette, Washington, Jefferson, Madison, Burr, and – hitherto least of all – Alexander Hamilton. It’s more likely that since the musical crash-landed into the public consciousness in 2015, the name of its creator is actually better known: Lin-Manuel Miranda.

Also well known are the statistics: initially 10 Lucille Lortel (off-Broadway) awards; followed by 11 Tonys, an Obie, a Pulitzer, a Grammy, eight Drama Desk Awards, plus a dozen assorted others, then seven Oliviers in London. According to Playbill, when it transferred to Broadway it did so on advance bookings of more than $US30m. Other stats and records would have been even more eye-watering if not for Covid19. (Which closed Broadway and postponed a translation scheduled for Hamburg until late this year. American history in rap, hip-hop, and R&B ballads – in German – yowzer!)

And can you imagine how many first-borns and whatnots the NSW Government had to promise to snag the show for Sydney? But no matter, because despite months of overwhelming hype and hoo-ha – even by Sydney standards and we do shockingly lavish hype and hoo-ha – it must be ungraciously admitted that it was worth it.

Hamilton is remarkable in so many ways it’s hard to know where to begin. However… you could read the 818-page house brick that is Ron Chernow’s excellent biography (2004) or see the show, because it’s what inspired Miranda over some days while on holiday, and you’ll be the full bottle in under three hours, without eye or wrist strain. 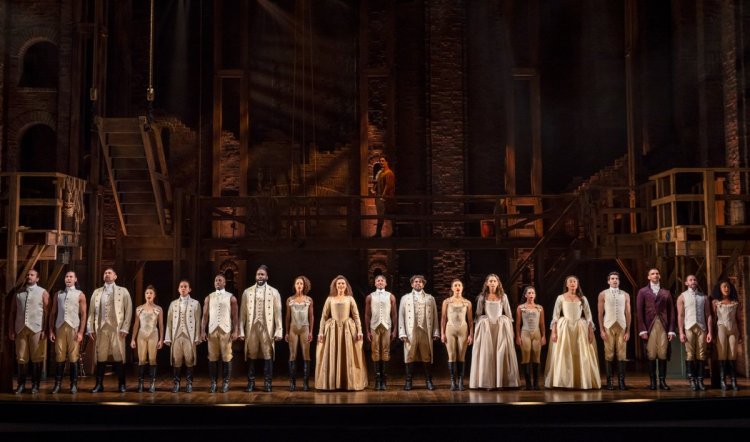 Briefly, it’s about Alexander Hamilton (Jason Arrow) who was a poor, orphaned immigrant to what were then George III’s colonies. The monarch (Brent Hill) is ticked off when he realises there is revolution fomenting there and his solution is war to teach the upstarts a thing or two. It didn’t work out as he intended, cue the cheeky refrain, “Immigrants. We get the job done.” And within minutes of opening, the audience is plunged straight into the drama of the founding fathers’ internecine squabbles.

The hyper-smart Hamilton is at the centre of the determination to set up an independent nation with a constitution, a bill of rights, and the policies needed to get the whole thing off the ground. Much to the chagrin of his Iago aka Aaron Burr (Lyndon Watts) and the other poobahs, George Washington (Matu Ngaropo), Lafayette/Jefferson (Victory Ndukwe), Madison/Hercules Mulligan (Shaka Cook). And the women.

Miranda makes up for the absence of women around the historical table by foregrounding the Schuyler sisters. The eldest, Angelica (Akina Edmonds) was Hamilton’s intellectual comrade. He married the second, Eliza (Chloe Zuel), and the third, Peggy (Elandra Eramiha) doubles in his later life as his partner in adultery, one Maria Reynolds. It’s a bittersweet device and is a taste of the wit and imagination that underpins the show.

That wit and imagination are, of course, evident in the virtually non-stop music. It shifts from mood to mood, genre to genre, and always forward. Forward momentum is maintained throughout and the result is a seismic shift from the musical theatre conventions of the past 80-odd years. The sweep of the story is vast, but the telling of it is intimate, droll, and insightful. 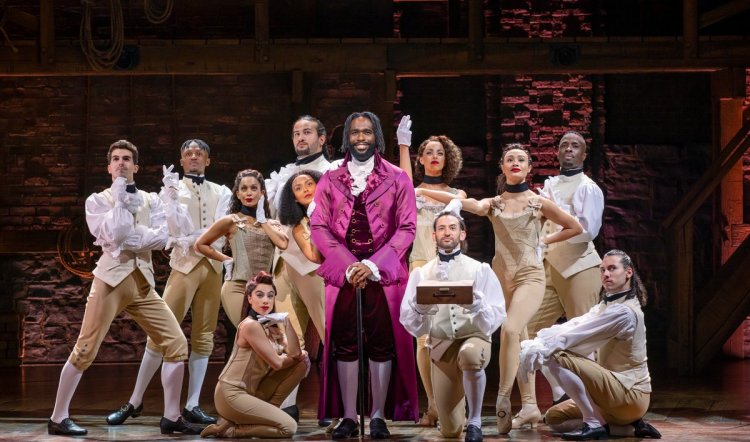 For Australia in 2021, still tied to the British monarchy and still up to its ears in historical racism and blood, the most extraordinary aspect of Hamilton is Miranda’s inspiration to invert the past and colonise the colonisers. Each Very Important White Man from the birth of the US nation is played by a person of colour. What’s not to love, aside from the music, the spectacle, the wit and humour, and enlightenment.

Hamilton actually warrants all the hype. Save up and see it.