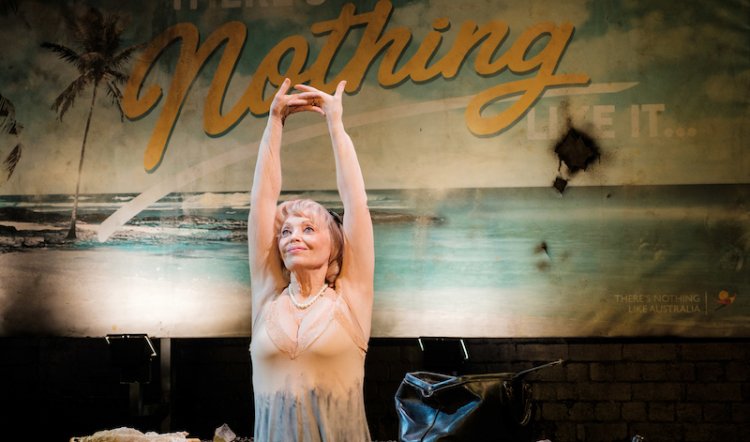 HAPPY DAYS, Red Line Productions at the Old Fitz, 12 June - 3 July 2021. Photography by Robert Catto: above and below - Belinda Giblin and Lex Marinos.

Before this one, there have been two memorable productions in Sydney of Samuel Beckett’s 1961 play Happy Days. Most notable was Ruth Cracknell’s era-defining performance in 1991 for Sydney Theatre Company (design Mary Moore, director Simon Phillips). And in 2009 at Belvoir, Julie Forsyth (director Michael Kantor, design Anna Cordingley).

Now, in 2021, the play resurfaces, as if newly written for these strangest of times directed by Craig Baldwin, with a brilliant Belinda Giblin as the hapless Winnie, marooned to her waist in a mound or urban detritus (designer Charles Davis).

Reported in 1967, Beckett said during rehearsals for the first Berlin production, “In this play you have the combination of the strange and the practical, the mysterious and the factual. This is the crux of both the comedy and the tragedy of it.” 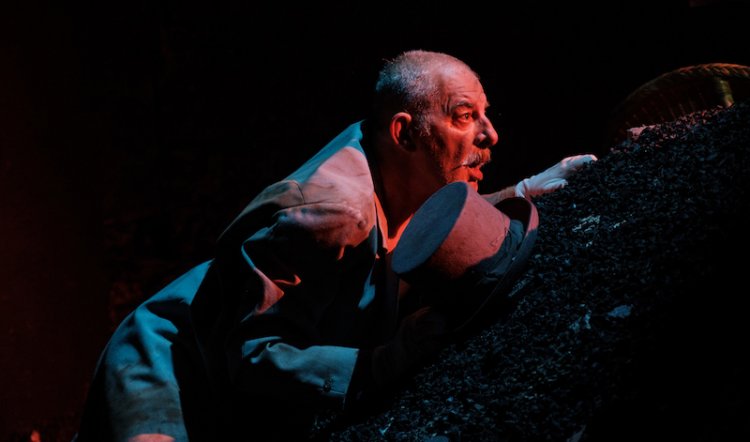 And that’s Winnie, in the form of the remarkable Giblin, prattling into the abyss after being introduced to the audience, out of the dark, by an extended overture of discordant, divergent sounds (composer Shareeka Helaluddin). It’s in stark contrast to the backdrop to Winnie’s rubbish heap: a tattered billboard poster advertising an idyllic Australian beach resort with little breakers, whispering palms, blue skies and benevolent sunshine.

In its entirety, the setting and Winnie’s place in it are startling evidence of the play’s timelessness and timeliness – 60 years old but as contemporarily unnerving and unkind as a global pandemic. We never know why Winnie is in her predicament – buried to her waist in a mullock heap with a dilly bag for company. From it she companionably takes familiar items - her toothbrush, an almost done tube of toothpaste, a nail file, a bottle of medicine, a parasol, a pistol…

Scattered nearby are the kinds of items you might find waiting for a lousy council pickup, or the end of the world: a white plastic patio chair, a badminton racquet, rusty corrugated iron, headphones, a half-buried cricket bat – remnants of normalcy. And all the while Winnie chirrups valiantly and incessantly – to keep at bay the unthinkable – that it is going to be another happy day.

Over the back of the heap and invisible to both Winnie and the audience is her husband Willie (Lex Marinos). If and when he communicates it’s mostly in grunt and groans, although he does read a couple of useful tidbits from a newspaper: job ads. 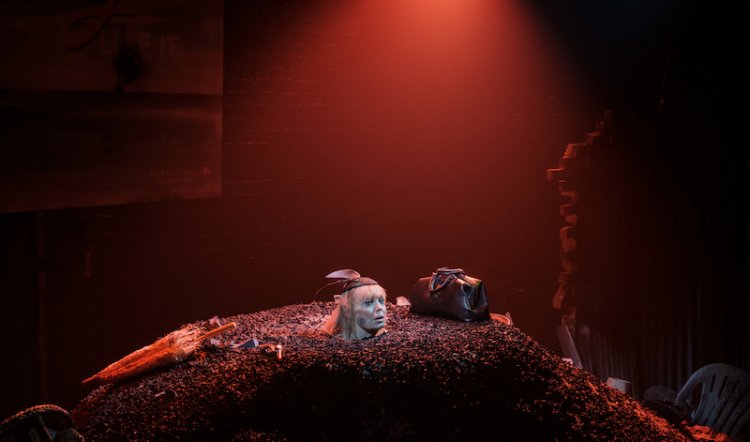 Beckett’s demands on the actors in Happy Days are monumental. Marinos could easily be a figure of mindless amusement, yet conveys with powerful dignity the plight of a man rendered helpless by inconceivable circumstance. Giblin likewise handles the physical incarceration with extraordinary verve. Winnie is comical, yet her silly demeanour is tragic in its boundless optimism. And when there are occasional flashes of comprehension – that this happy day is simply not – the power of it is searing.

Watching and listening to Winnie becomes an almost physical sensation in the second half when the golden sunny light has morphed into a harsher, parched palette (lighting Veronique Benett) and Winnie has sunk to her neck in the dirt pile. Weariness has overtaken her and instead of the previously sparkling blue eyes of hope, she somehow peers at us with grey sadness. She is spent, no longer buoyant. It’s an outstanding, heartbreaking performance.

The end is as ambiguous and open to individual interpretation as the rest of the play. As Willie wearily crawls up the unforgiving pile of rubble towards Winnie and she is finally able to see him – in his Sunday best – she begins to warble the song of their lives “I Love You So”. And Willie reaches in vain towards her, or to the gun, or to a future, or…

Theatre for grown-ups to savour and puzzle over, with the marvellous Belinda Giblin reaching new heights, and Lex Marinos backing her to the hilt. Recommended without reservation.