IS THERE SOMETHING WRONG WITH THAT LADY?

IS THERE SOMETHING WRONG WITH THAT LADY? Griffin Theatre Company at the SBW Stables Theatre, 13-24 April 2021. Photography by Brett Boardman

The title of Debra Oswald’s one-woman, autobiographical hour-and-a-few refers to the reaction of a kid to its mother upon discovering her sobbing in the aisles at Woolies. Oswald fashions a wry joke out of a painful moment. She’s good at that.

Like so many genuinely funny artists, Oswald’s famous drollery and wordplay are the frontline. Behind it, skilfully hidden to better leap out and bite you where it hurts, lie pathos, drama, torments large and small and truckloads of witty self-deprecation. She is a heady mix of talent and skills – which is possibly why her brilliant career has so often resembled a roller-coaster. Most blokes (aka, those most often in charge) have no idea how to deal with her.

Walking on stage to a nice, red leather bucket chair surrounded by document storage boxes, Oswald is clearly not an actor. She’s come to share her stories and to be taken as she is: jeans, embroidered top, coppery curls loose to her shoulders and evidently newly washed.

Her beginnings in a western ’burb of Sydney were not auspicious for an artist, she believed, as that’s not where artists come from. It didn’t deter her. “Dogged” is her description of herself. Unwittingly baptised into theatre by a spray of Reg Livermore’s sweat – from the very stage on which she is standing, awe and delight shining in her eyes – Oswald was lost to writing at that moment.

Writing, you’ll notice, not acting. She wanted to make it, not do it, although as she describes with startling honesty, later in the piece, writing the sex scenes for Nina and Patrick in Offspring was another way of “doing it” altogether. 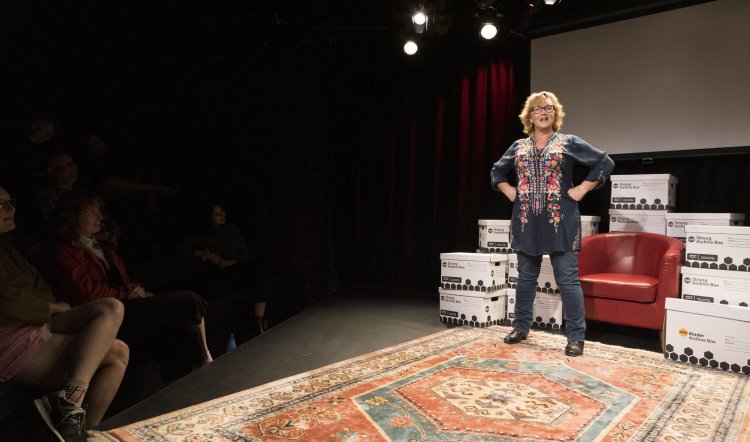 As a child, Oswald was – like so many kids who live in the world of their own heads – a professional standard hypochondriac. Despite many fatal ailments she survived to healthy adulthood and with unlikely encouragement from an illustrious theatre royal, ploughed ahead into a writing career.

She also plunged headlong into ridding herself of her virginity, with mixed and highly amusing success. Then she met a man who wooed her with fried eggs plonked on top of steamed cauliflower. They’re still together and have two grown sons. Who knew.

Beneath a sparkling and often laugh-out-loud surface, however, lies an abusive relationship that Oswald continues to struggle with, despite announcing that it’s over. The more she jokes about it, the more she reminds us (herself?) “I’ve been very fortunate,” “I’ve led a charmed life,” “I’m very lucky,” it’s more and more clear that the bastard lover known as Theatre has done a real number on her and continues to do so.

She is now happily in a lucrative, much-rewarded and much admired relationship with Television (who can also be a pig, it must be said) but it’s painfully clear that Theatre – the audience, the liveness of it all – was her first love and will probably be her last.

Director and collaborator Lee Lewis wisely allows Oswald to be herself and keeps theatricality and actorly gestures to a minimum. Benjamin Brockman’s lighting is the only other stage participant along with some projected images of young Deb and a few jokes. Her musings and questions – to the audience and herself – about this toxic lover are both entertaining and illuminating. 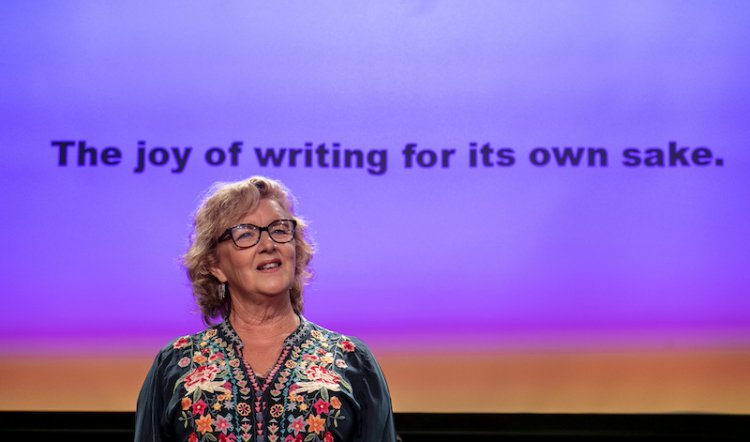 Any partial list of her successes illustrates why she refuses to whine, but also why she hurts: most of her triumphs spent years on reject piles before being “discovered”. They range from the adored Offspring, through the first stage smash hit, Dags, to the acclaimed Gary’s House, The Peach Season and Mr Bailey’s Minder. And that doesn’t begin to acknowledge the awards, TV series, novels and works for children and young people. And yet, and yet…

The thing is, Oswald is a writer and can’t help herself. She was lost from her parents’ gift of a portable typewriter, aged eleven. Now 61, she has branched out – but still has written the script! And her new novel The Family Doctor – utterly gripping, btw – is already being turned into a mini-series. Lest we think she’s big-noting, however, she’s dolefully noted that a previous novel sold so few copies it would have been easier to go round to buyers’ houses and tell them the story rather than write it.

For reasons of art and craft, heart and honesty, Is There Something Wrong with That Lady? is as poignant and moving as it is wicked and wickedly funny. Fair chance that many women will leave the theatre with lumps in throats as well as a touch of simmering rage. It’s that time, of course, not of-the-month, but of history. Oswald touches nerves as well as funny bones and delivers something unexpectedly precious and profound.