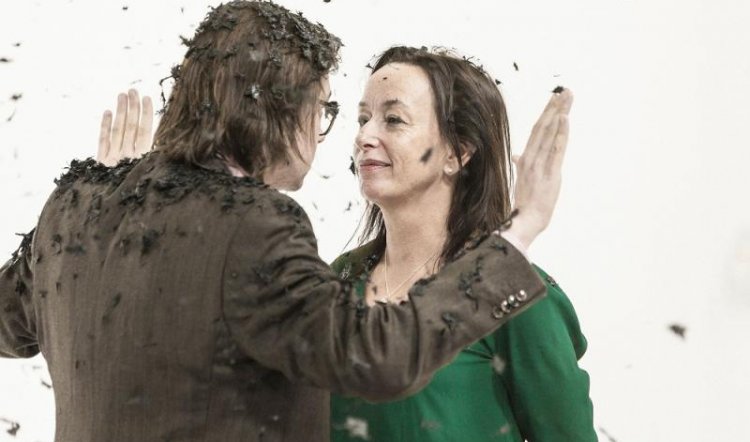 Because of Covid19, one of Adelaide’s most popular international visitors, Ivo van Hove’s Internationaal Theater Amsterdam, has been locked down in the Netherlands and their theatre closed to the public since last October. However, rather than miss out on their latest big hit (London and New York seasons scored high on the wow factor scale pre-Covid) Adelaide Festival decided to bring it to the city, live-streamed directly onto Her Majesty’s stage (and simultaneously to Mt Gambier in country SA!).

Its live state was initially underlined by a couple of technical glitches before visibly-thrilled artistic directors Neil Armfield and Rachel Healy did a Zoom cross to the Amsterdam theatre from a laptop on stage in Adelaide, then the cast waved as the Australian audience applauded and the show was underway.

Written and directed by Simon Stone, this Medea is true to the idea of Euripides’ 430BC tragedy but reinvented with thrilling imagination in lightly referencing the 1996 events in the USA when sometime medico Debora Green was charged and convicted of murdering two of her three children and attempting to murder her estranged husband by ricin poisoning.

Stone delves deep into emotions and motivations through following the actions and words of Anna (Marieke Heebink) as she confronts the realisation that her husband Lucas (Aus Greidanus jr) is on the verge of leaving her. His new object of desire is the younger Clara (Eva Heijnen) whose father Christopher (Bart Slegers) is head of the research institute where Anna previously worked; and he has promised Lucas the top job if he marries Clara. 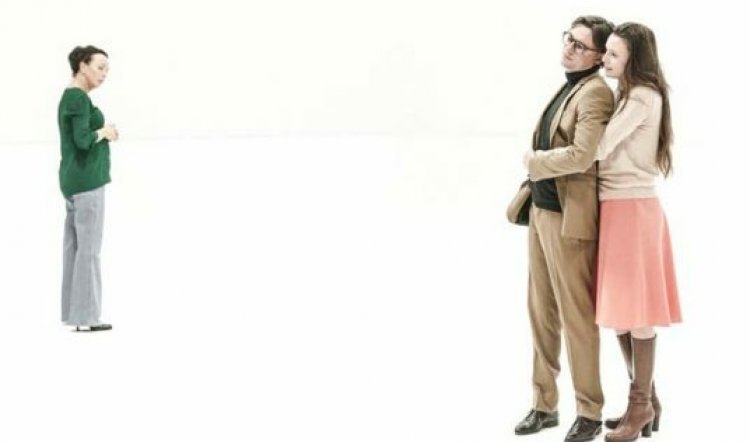 While Anna is understandably incensed, what actually began her slide into murderous ideation – and got her fired from the institute where she was a star – is that the Nobel Prize for her work was credited to the men who had ridden her coattails to fame and fortune.

It is such a common scenario it’s enough to make any woman feel homicidal. And if you’re doubtful, think of the women who did the math for NASA that no one knew about until the movie. Think of more you’ve never heard of such as Clara Driscoll and the “Tiffany Girls” who created the lamps, Frances Perkins who devised FDR’s New Deal, nuclear physicist Chien-Shiung Wu whose work disproved the law of parity, artist Margaret Keane whose hubby Walter took the credit, astrophysicist Jocelyn Bell Burnell who discovered pulsars. And on goes the list… So, no wonder Anna buys castor seeds to grind up into deadly Ricin and finally devises the worst revenge of all.

The domestic manoeuvres of contemporary middle-class husband and wife and those around them are played out on an empty white stage, starkly lit and dwarfing the players (Design, Bob Cousins, lighting design, Bernie van Velzen, costumes, An D’Huys). Also – crucially – on a big screen is projected the running movie of these events, filmed by the two children, Gijs (Titus Theunissen) and Edgar (Sonny van Utteren).

It’s a startling and effective way of advancing a story that is at once of mischievous and unsuspecting innocents, while also dissecting the deepest, darkest, and least acceptable adult behaviours. Stone has achieved a delicate and thrilling balance in the writing, and the actors have reached similar heights in performing that difficult double of working to camera and also to a rapt live audience (albeit this one was on the other side of the world).

Marieke Heebink is first among equals in a flawless company – and has won awards for her performance. And the 90+ minutes are enthralling, terrifying, and doubly so for being entirely plausible. This Medea is brutal, occasionally funny, always gripping, and an extraordinary achievement for all concerned (including the Adelaide Festival). Brilliant and a privilege to have seen.

[Only glitch – easily fixed for future live streams – is the subtitles. These are essential for a non-Dutch speaking audience and, with the best sight-lines in the world, are partially hidden, which is why the surtitle was invented and would be so much better here.]