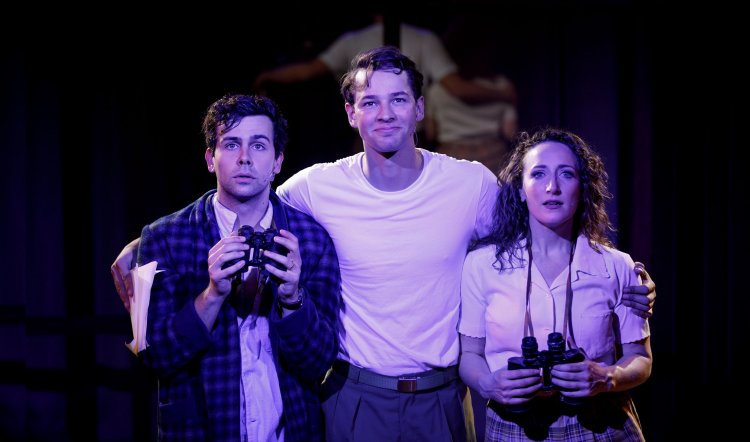 MERRILY WE ROLL ALONG, Luckiest Productions and Hayes Theatre Co at the Hayes Theatre, to 26 October-27 November 2021. Photography by Phil Erbacher: above - Ainsley Melham, Andrew Coshan, and Elise McCann; below - Georgina Hopson; below again - the company

Before Merrily We Roll Along in 1981, Stephen Sondheim had created among others, Sweeney Todd (1979), Pacific Overtures (1976), A Little Night Music (1973); and after it, Sunday in the Park With George (1984), Into the Woods (1987) and Assassins (1990). The glittering list goes on and on, of course. Some – such as these – are seemingly eternal and on stage somewhere in the world at any minute, while others are rarely seen: The Frogs, Bounce, Anyone Can Whistle.

Merrily We Roll Along is in a category of its own: dated, lacking contemporary relevance, and in this production at least, muddled,  confusing, and eventually: tedious. Given the opening night raptures, it’s possibly one for diehard musical theatre fans or friends of cast members, but otherwise, it’s hard to drum up an emotional response to the characters or their stories. 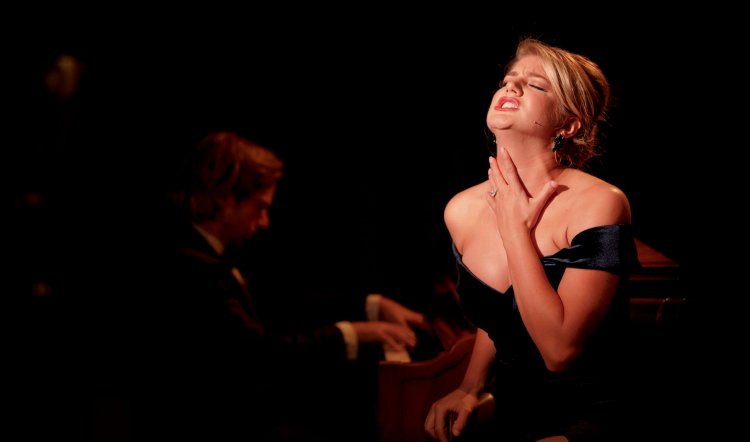 It’s not for want of trying or talent. Elise McCann is subtly riveting as Mary Flynn, a Dorothy Parker-ish figure at once hilarious and tragic. She’s one-third of a trio of hopefuls whose lives are portrayed from embittered middle age right the way back to wide-eyed optimism. Her best buds and the wannabe hit writing team are also fine: Andrew Coshan is the naif maturing to cynically debonair music man Franklin Shepherd, while Ainsley Melham hangs on to his principles and charm as typewriter jockey Charley Kringas.

Georgina Hopson (to 13 November) chews the wallpaper with gusto as Franklin’s ambitious sex bomb second wife Gussie. Tiarne Suew Yek as his discarded first wife Beth grabs her big ballad moment and stops the show. Aaron Tsindos excels in multiple roles, while Vidya Makan makes the most of her several turns. The orchestration and band – on stage behind a large picture window – are beautifully managed by Andrew Worboys, although at two and a half hours (with interval) the music itself becomes almost as repetitive and limited as Lord Lloyd-Webber. 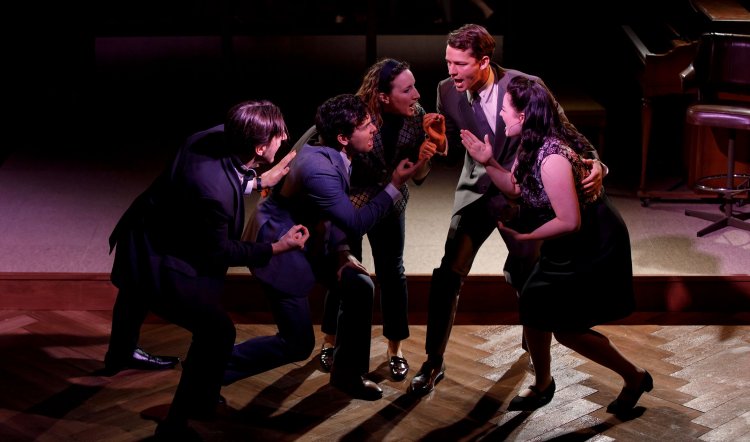 The staging (Dean Bryant, director, Jeremy Allen set design) is imaginative and straightforward, with a couple of side-stage cubby holes containing hidden cameras occasionally and sneakily projecting characters onto a wide, narrow screen above the set. The sound is overpowering and words are frequently lost, at great cost.

The look of the show doesn’t sufficiently fix the era and life stage of any given moment; that the company announces the year in question is helpful. And, as the second half begins to feel interminable, despite Andrew Hallsworth’s intelligent, zingy choreography, one can easily fall to wondering whether losing a couple of numbers wouldn’t help. The Kennedys song, for instance, must surely be incomprehensible to anyone under 65 and pops up incongruously anyway. Altogether, despite the energy, talent, and non-stop efforts of the company, it’s a long evening.