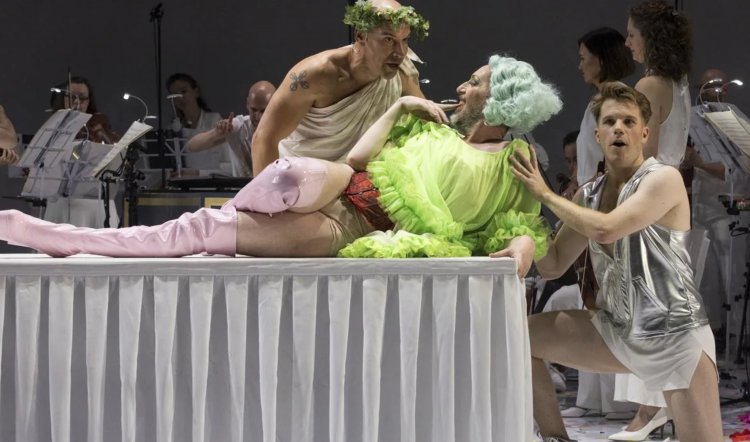 A Pinchgut Opera production is always a treat of anticipation, and Platée is no exception. When the season was first announced back in whatever black hole of lockdown we were then in, this subversive comédie-tragédie lyrique by French master Jean-Philippe Rameau fairly leapt out of the list. Why?

For starters, who among us has seen Platée? No? Thought not. And then there were the names: Kanen Breen (to play the titular naif and swamp nymph); Neil Armfield – to direct. And “the Royals” to add even more lustre and heft: Cheryl Barker AO and Peter Coleman-Wright AO. Who could resist?

The result is an electrifying production, visually, musically, historically and every other which way. It is, of course, about gods - Jupiter and Juno (the Barker-Coleman-Wrights) whose marriage needs a bit of perking up. Juno is furious with Jupiter and he thinks he can fix it by mock-marrying the swamp nymph.  Yes, really.

To assist in this sensible endeavour Jupiter enlists the participation of a mob of only slightly lesser and sillier beings. First among equals is the sexiest bass-baritone satyr on the block, Cithéron (Adrian Tamburini); then Love and Madness – brought to soaring soprano life in a Siouxsie Sioux of a performance by Cathy-Di Zhang. Then David Greco’s rich baritone is a delicious dichotomy in the nonsensical yet uneasy person of Momus, god of scorn and mockery. And Nicholas Jones as both Mercury, the messenger and Thespis the divine of comedy, delivers nuanced and discrete characters and a warmly expressive tenor. (He was an unforgettable Fish Lamb in George Palmer’s adaptation of Tim Winton’s Cloudstreet, State Opera of SA). 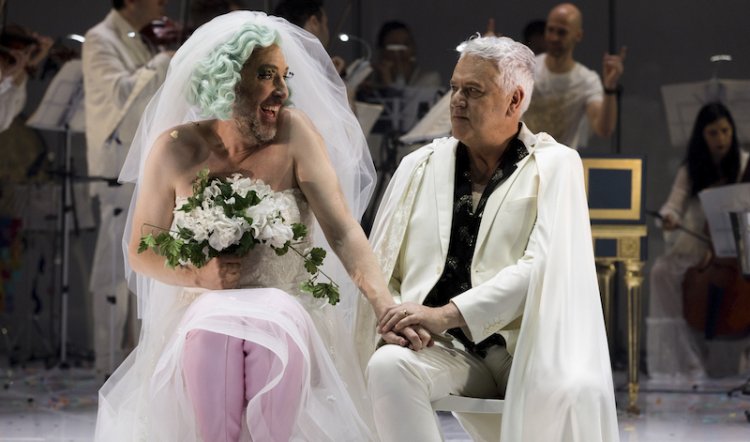 Pinchgut is also about the voices of Cantillation and the period instrumentation of the Orchestra of the Antipodes. Led by artistic director, Erin Helyard (conductor and harpsichord) these two outfits are renowned at home and abroad, and for good reason. The music is sublime, clear and full of purpose.

Director Neil Armfield’s meticulous attention to detail means each member of the chorus not only sings but inhabits a character with all his or her tics and raison d’être. The lengthy musical interludes are therefore filled with action. The opening overture, for instance, rather than a static tableau as is usually the case, depicts the aftermath of a cracking good party as each singer and soloist slowly and painfully awakes to full hangover mode and a proferred can of Red Bull.

Backstage in the No.1 dressing room meanwhile, a roving video camera discovers the equally under-the-weather Jupiter and worse-for-wear Juno, neatly brought into the action a full act and a bit before they actually appear on stage.

The use of the cameras and a large suspended screen (Sean Bacon) is integral rather than gimmicky and transforms the concert space into a rich, full staging. Thunder, lightning and myriad SFX (Alexander Berlage) complement the un-amplified voices and orchestra, as does Shannon Burns’ choreography. The whole is a dazzling spectacle.

Nevertheless, not enough can be said about Kanen Breen. His is a performance of such complexity and completeness as to be breathtaking.  His athleticism – while wearing a pair of thigh-high, pink patent platform boots – is matched by astonishing vocal dexterity. Through more than two hours on stage, his concentration and attention to the tiniest detail of  Platée’s character are flawless. Director and performer have between them created an image and memory for the ages. Breen is as heartbreaking as he is funny: a great performance.