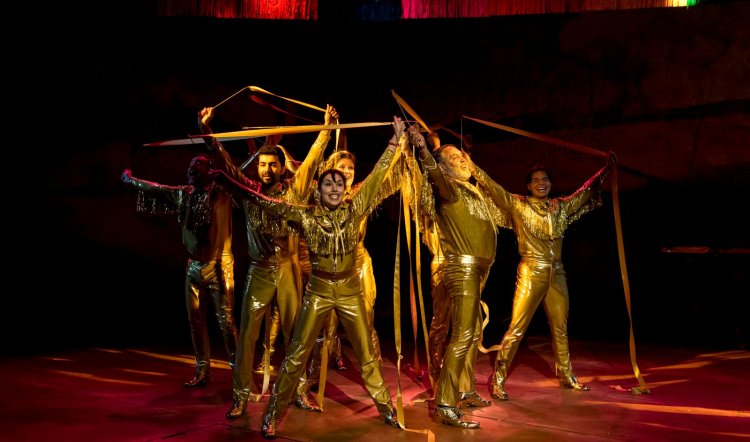 After the raging success of Calamity Jane, it occurred to its co-creators Richard Carroll and Virginia Gay to make another show. The result, God bless us all, is The Boomkak Panto.

In her program notes Gay reveals that while on a visit to England she experienced two actual pantomimes. One was an amateur school production, the other a West End extravaganza with loads of soapie stars and production values.

To her surprise, both had two things in common: the first was that they were “batshit mental” and perfectly dreadful; the second was that audiences loved them and almost wet themselves with joy.

That’s the thing about pantomime, that beloved theatre staple of the long British winter: the worse it is, the better it is and the more the audience adores it. There have to be awful jokes, more awful jokes, and – to obey the comedic law of threes – even more awful jokes.

The audience must participate with concerted bellows of such classics as “Oh yes you will/oh no you won’t!” And “He’s behind you!” It’s also a given that you must hiss the villain – in this case Bad Developer – at each of his cackling exits. And in the end, you will feel ridiculously uplifted and not a little teary because you haven’t had such fun in…ever. 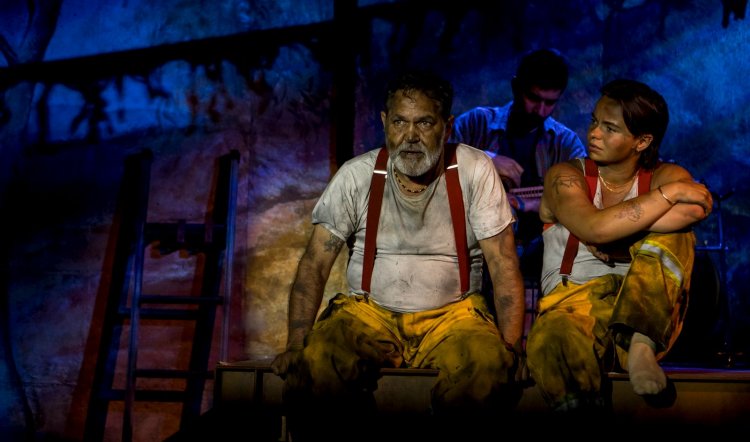 In essence that’s The Boomkak Panto. It takes place in the dusty, almost forgotten, typical small town of Boomkak. There lives a microcosm of Australia: an unloved Mayor (currently on holiday in Hawaii and never around when he’s needed), his deputy and local Land Council head, Uncle Darren (Billy McPherson) who wrestles to keep everything going.

In panto, there have to be two lots of love interests: a young pair and an old pair. The twinkle in Uncle Darren’s eye is local entrepreneur, Middle Eastern eatery-owner, and refugee success story Parnia (Deborah Galanos in glorious form). But we’re being a bit previous…

Focus of the action is always the Handsome Prince and the Beautiful Princess. It’s 2021 however, so the would-be HP is a sexist dork Butch (Rob Johnson), the would-be BP is Parnia’s dutiful daughter Yazmin (Mary Soudi) and the actual Handsome Prince/Beautiful Princess is Uncle Darren’s struggling trans kid Zoe (Zoe Terakes) and they are destined to be the actual hero/ine of our tale.

(There is no such thing as a spoiler alert in panto, btw, as you always know exactly what’s going to happen next and to whom. There is also a lot of parentheses.)

Being Mod-Oz however, there’s also a middle-class pair to make fun of. In this instance, it’s a rich and self-entitled actor John (Toby Truslove). He and his lovely wife Alison (Virginia Gay) are renovating an old home into a palazzo of white on white with extra terrazzo. Alison was also once the stage manager of English pantomime (you get the picture.) 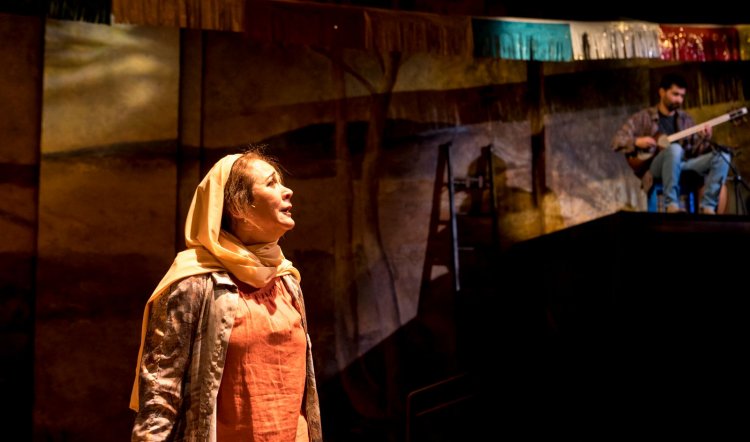 What happens when The Bad Developer (Rob Johnson) comes to town is the Devon in the sandwich. All the other ingredients are there: creaky plot lines, groan-making jokes, idiotic scenarios, unlikely outcomes. Lots of music – Hamed Sadeghi plays live on stage with backing tracks and gorgeous songs by Eddie Perfect. Hilarious company dance numbers are choreographed by Elle Evangelista.

The set is mainly the back walls of the theatre painted to resemble the land and townscape of Boomkak including the old tomato sauce factory – geddit? (Designed by Michael Hankin, painted by Russell Carey, with Jasmine Rizk’s lighting).

The Boomkak Panto is as saggy, baggy, and ramshackle as Widow Twankey’s bloomers (look her up, Toby Truslove does a fine interpretation). Virginia Gay has, with a little assistance she says, from her co-conspirators, come up with a script and theatre experience as old as the hills and as up to the minute as breaking news. It’s turkey-stuffed with politics and profanity, laughter and more laughter, sexual politics, and a heart-wrenching plea for kindness, community, and plain old, much-needed human love. A fabulous treat.