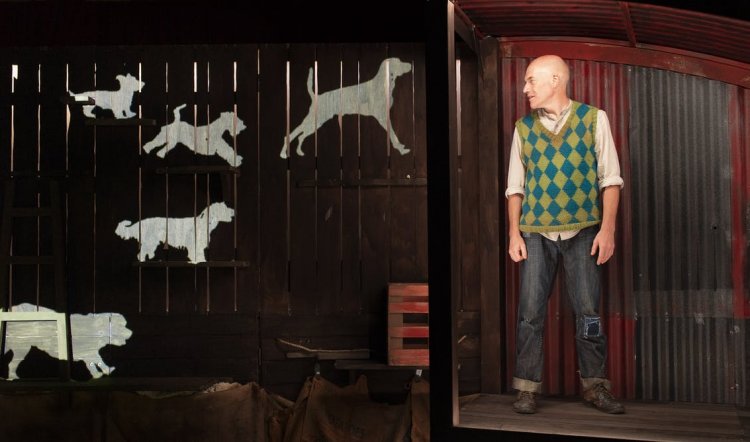 This is one of Adelaide Festival 2021’s most anticipated events: a co-production between Slingsby and the State Theatre Company of South Australia, with the participation of Draíocht Arts Centre, Dublin. It brings to the stage Amy Conroy’s adaptation of a memoir by Martin McKenna, with further input from Bryan Burroughs, who plays Martin; songwriter Lisa O’Neill and onstage musicians Victoria Falconer, Emma Luker, and Quincy Grant (score).

The show begins in the foyer where a Guinness can be purchased, or something else if the black stout is not your thing and then continues in earnest in the auditorium. The initial focus is one corner set up as the Harp & Hound pub, where jolly Irish music is being played on banjo, fiddle, and piano accordion.

The tale of young Martin is folksily sung and culminates in his introduction. Except he refuses to be introduced and skulks and sulks in the audience instead. Like so many kids, he doesn’t like the way his story is being told – and who can blame him, because it isn’t pretty. Nevertheless, he is coaxed into the spotlight and gradually takes over the narrative as himself. 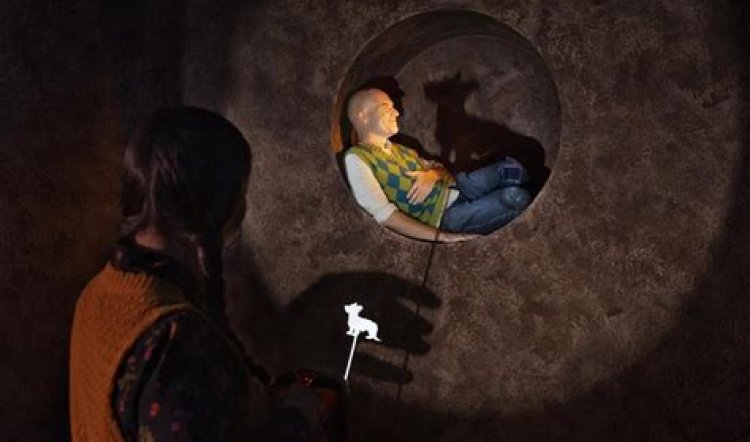 The story is based on the true one – and bestseller – of “the dog man” who now lives in Nimbin having emigrated to Australia from Limerick. He did it to get away from the memories of an abusive father, a coal shed where he was often incarcerated with two German Shepherds, and the bullying and abuse he experienced at school from Mr Keeley and classmates.

It becomes obvious, as Martin traverses the auditorium, that he suffered from what we would now call ADHD, but which was unrecognised back then and gets him into constant and ever-escalating trouble. This is illustrated as he moves around between the tables of six and to different corners. The family kitchen occupies one, a scabby hideaway fills another, and yet another is lit to become the barn where he hides out with the stray dogs that become his family after he runs away from home. (Set designer, Wendy Todd, lighting design Chris Petridis.)

Because of his incredibly irritating and misunderstood behaviour, Martin’s life is an unhappy one until he falls in with the dogs – effectively represented as silhouettes and lighting states. After that things look up a bit even though a runaway life in rural Ireland could not have been a barrel of fun. (Costumes by Ailsa Paterson are a reminder of when holey jeans and too-tight knits were a long way from fashion statements.) 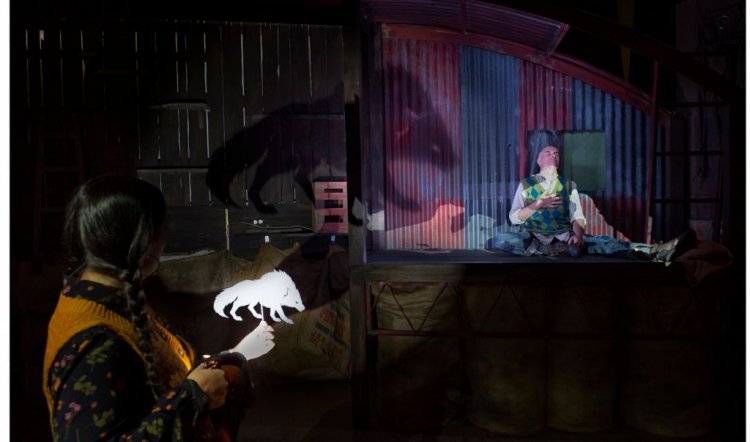 Bryan Burroughs is a non-stop blaze of energy as Martin, staying just this side of outright aggro to be vaguely charming, while the musicians remain firmly on the please-the-audience with jigs and merriment side of the dial.

The full-house at the Thursday matinee was clearly engaged and enjoying the show. It’s directed by Slingsby’s Andy Packer to take in every corner of the auditorium with much colour and movement. However, there is nothing in The Boy Who Talked To Dogs that hasn’t been seen and told, Irish style or any other which way, many times before.

Early on in the 80 minutes accordionist and occasional narrator Victoria Falconer chides Martin that it’s “supposed to be a family show.” She reminds him that an audience survey revealed they wanted a “heroic tale of overcoming adversity.” Martin isn’t amused and, frankly, why would he be? How many such stories have been staged? And with a dodgy sound mix that often turns the all-important text to mud, something more original would have been welcome. But, as already noted: most of the audience loved it.