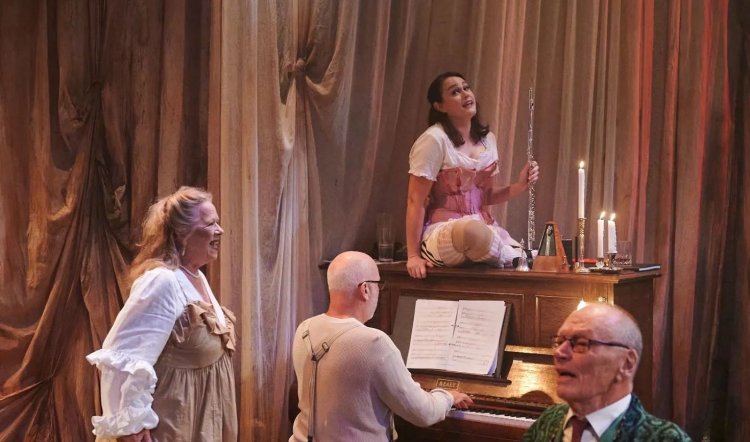 It’s told through the eyes and dubious talents of the Crummle family of touring actors. They are lately returned from the provinces where their actor-manager-patriarch (John Bell) delivered his Lear – among other gems by the Bard. The provinces are probably still in recovery from such a surfeit of histrionics.

This variegated collection of thespians arrives in the theatre with the audience. Each has a bit of a chat, or offers seating advice and generally reveals little evidence of serious dramatic intent or ability. By way of contrast, the show’s musical director Daryl Wallis demonstrates considerable pianism skills at an upright piano. Meanwhile the audience must take note of the toy piano, a vast gong and drum, a metronome, and lots of bells that suggest campanology might soon occur.

Led by cast members/Crummles Valeria Bader, Emily McKnight, Jay James-Moody and Anthony Taufa, a sing-along morphs out of tunes ranging across ABBA, Tiny Tim, and Christmas carols. In a trice the audience is disarmed by this traditional disarming device, then jumps out of its collective skin as a blackout and huge bang transport all to a Victorian setting (era, not the state). 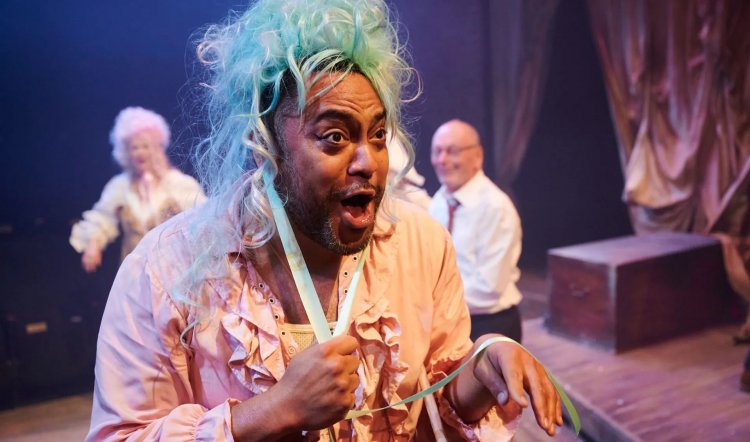 The actors – playing actors – assume the roles of the Dickens story. It’s led by Ebenezer Scrooge (Bell) whose love of money, the making of it, and the keeping of it from those less fortunate make Gina Rinehart seem (almost) benevolent. Although these days, when he sneers in money-grubbing glee, he can also uncannily resemble Rupert Murdoch.

The ensemble takes on multiple roles: Anthony Taufa is Scrooge’s seven-years-dead business partner Jacob Marley, whose ghost returns to warn him of his fate if he continues to prefigure Milton Friedman. He’s also visiting spirits and Scrooge’s nephew and a sharp contrast to his beastly uncle.

Valerie Bader is a stage-filling presence at any time and here, the generosity of her performance and her wicked sense of humour and timing light up the stage as Mrs Cratchit, Madam Crummle and sundry others. Similarly, Jay James-Moody is an angel-faced innocent as Bob Cratchit, Scrooge’s loyal and underpaid clerk, while also flitting about in other luvvie guises.

Finally, a newcomer to the mainstream is Emily McKnight, who plays the flute, manipulates the stylised, heartrending puppet that represents the Cratchits’ sickly son Tiny Tim (puppet maker Tina Williams), and also sparkles in her diverse roles. 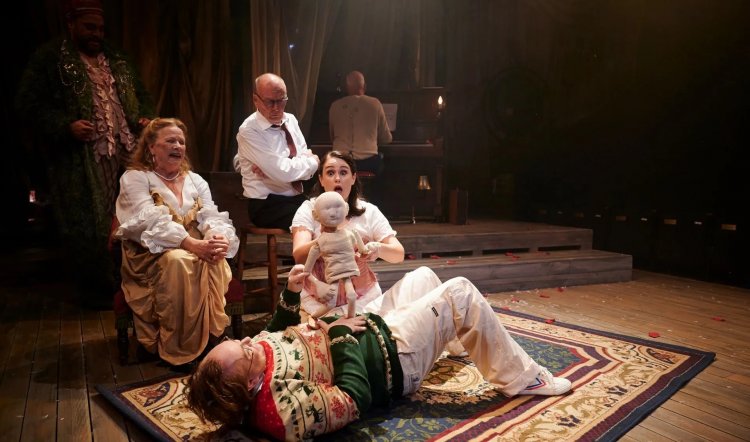 It’s a fine ensemble and the actors do wonders on Ailsa Paterson’s cunningly simple set of translucent drapes and raised timber stage bits, and in Genevieve Graham’s excellent semi-now and semi-then costumes. All these are atmospherically lit by Mat Cox and set off by composer Philip Johnston’s incidental music.

The Dickens novella that tells of the misanthrope who finally tastes the milk of human kindness after a horror night being visited by the spirits of Christmas Past, Present, and Future lends itself to the stage. In Hilary Bell’s witty yet respectful adaptation, the story is as fresh as today and sadly, the greed and cruelty Dickens so loathed and railed against are even worse.

Damien Ryan is one of our finest theatre directors and his shaping and guiding of the narrative and performances make for a deliciously entertaining and thought-provoking 80 minutes. It’s funny, tragic, illuminating, uplifting, and timely. A Christmas gift for all the family. Recommended without reservation.