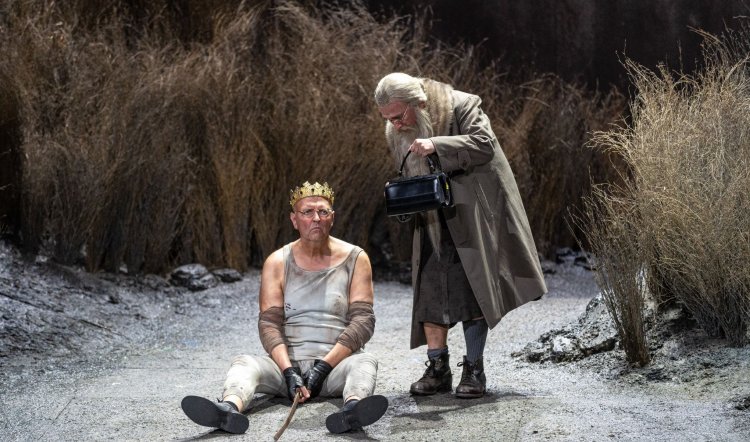 Barrie Kosky’s production of Rimsky-Korsakov’s satirical spray at Tsar Nicholas’s bloody 1904-1905 Russo-Japanese war is uncannily prescient. More so because the Covid-delayed opera has the Russian leader Tsar Dodon (Pavlo Hunka) myopic in wire-rimmed spectacles. Alarming too is that the Astrologer (Andrei Popov) who one might expect to have reasonable vision, also wears wire-rimmed spectacles, all to no avail as it turns out.

The specs are a sly touch, typically Kosky perhaps, in a production that abounds in visual wit and originality (stage design Rufus Didwiszus, costume design Victoria Behr). Famously, the military is represented by ridiculously huge black horses’ heads – skittishly prancing and manoeuvred by dancers and choristers whose black stocking- and suspender-clad legs are all that is visible of them. That they are absurdly cute when not being oddly menacing says a lot.

As it is, Dodon is convinced foreigners keep invading his realm, or want to, and he must go to war. That he is dressed in droopy, grubby long johns and singlet doesn’t bother him a great deal as his crown is firmly on his head. The Astrologer, an extremely suss person in lengthy beard and black frock, gifts him a magical weather vane – the golden cockerel – which will warn of approaching danger. Dodon is delighted and relieved although it’s all a figment of folklore and fairy tale.

The grotesque flummery of absolute power is clearly evident in Pavlo Hunka’s magnificent performance: he sings virtually non-stop for the first half of the opera’s two hours and his powerful, rich bass-baritone soars above the massed splendours of the Adelaide Symphony Orchestra (conductor: Arvo Volmer). At the same time, his physical performance is all capering vanity and flashes of sword-wielding violence: no wonder his subjects are cowed. 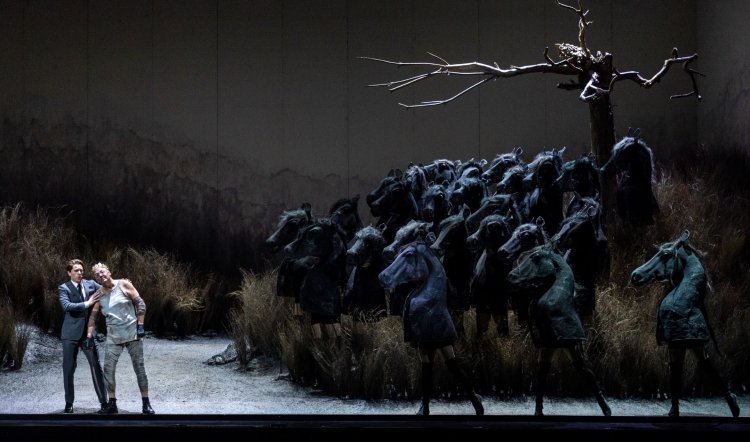 The Cockerel (Matthew Whittet) seems indifferent, however, and spends most of his time up a blasted wreck of a tree, snoozing or observing. When he does occasionally perk up and utter “Petukh dudl du”, which Google Translate makes into “cock-a-doodle-doo”, it is via the glorious off-stage voice of soprano Samantha Clarke. Mostly the Cockerel reassures that all is well, then he announces the arrival of someone from the east. It is the Queen of Chemakha (Venera Gimadieva).

The Queen is as regal as Dodon is not in all-glam Swarovski and towering white peacock plumes. Dodon is smitten, unfortunately, so are his two soigné sons, Tsarevich Aphron (Samuel Dundas) and Tsarevich Gvidon (Nicholas Jones). Although the Cockerel warns of trouble ahead, power and the penis prevail: Dodon will not listen.  There will be tears before bedtime despite various interventions and distractions from the sumptuous Amelfa (Alexandra Durseneva) and horse general Polkan (Mischa Schelomianski).

All of this takes place in and on a single set of blasted heath and the Cockerel’s dead tree. It’s stark and peculiarly beautiful, especially when horses or an occasional troupe of Mardi Gras-style boy dancers frolic through its grasses, but it’s also very constraining. We are left to imagine sights and locations of which the singers sing and these are often incongruous to the point of comedy.

Similarly, the lighting seems perverse, rather than dreamlike (lighting design Franck Evin). It frequently leaves characters in the dark, or moving from light patch to darkness, or blinded by white light and upstaged by shadows. And a sequence when Dodon’s shadow hand plays across the queen’s bosom is simply ludicrous and draws attention from her aria. 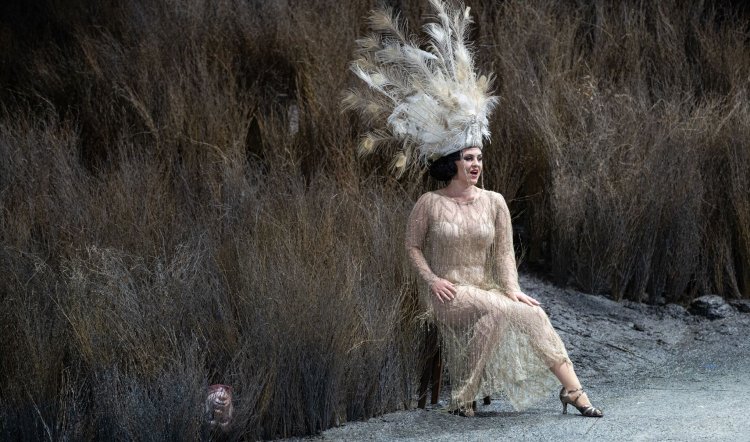 Nevertheless, with several beheadings, bodies strung up from the very busy dead tree and an axe murder by the tsar, the action never flags, even including the Cockerel’s final tasty revenge which is as comical as it is revolting! It is as provocative today as it was 100 years ago.

Rimsky-Korsakov’s music is sublime, melodic and many-hued and the singers are more than equal to its demands – Ukrainian, Russian and Australian alike. It’s actually how one would like to see major differences sorted: through music.

After Kosky’s Saul in 2017 and The Magic Flute in 2019, it’s the wicked  Golden Cockerel – banned and censored on its debut 100 years ago – that underlines the bold and beautiful riches the artistic duo of Neil Armfield and Rachel Healy has brought to Adelaide during their tenure. Catch this one if you can.