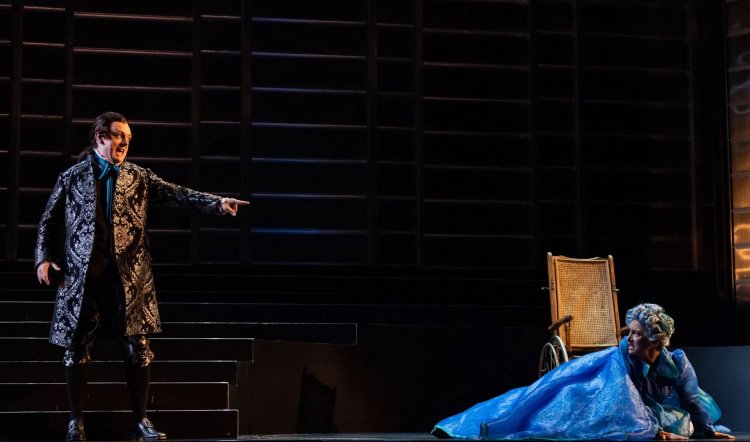 This new version of Amadeus brings Welsh stage and screen star Michael Sheen to Sydney in a production of dazzling ambition and achievement. As well as revisiting Peter Shaffer’s 1979 classic of art, envy, God, and mediocrity (and much lusciously rendered music via the Metropolitan Orchestra, live on stage conducted by Sarah-Grace Williams), this Amadeus has a backstory worthy of a show of its own.

Producer Andrew Henry, of the little company that could, Red Line at the Old Fitz, has been trying to secure the rights to Amadeus for years in pursuit of a lifelong determination to stage the play his way. The turn-downs were innumerable but as he has said, “What’s the worst that could happen? They say no – so what?” He kept at it. And right beside him was Vanessa Wright, co-producer at Red Line and the sane anchor that allows Henry’s crazy aspirations to fly.

Along the way the pandemic shutdowns crippled live theatre and much else besides, Henry turned his attention to live theatre on camera (not Zoom, nb). His requests to Rose Byrne, Alec Baldwin, Ewen Leslie, Toby Schmitz, and John Butler all came back “Yes” and led to some of the most innovative theatre ever – a reasonably priced ticket unlocked your home screen to these actors and otherwise unattainable plays. And somewhere in the world, someone attached to the Amadeus rights also tuned in and decided to say “yes”.

Fast forward to the next cheeky approach: to Michael Sheen, who said “yes”; and to Louise Herron, boss of Sydney Opera House and on the lookout for special events to celebrate the House in 2023 – its 50th birthday. She also said “yes” and gradually the other elements of what would end up as a theatrical juggernaut began to gather together and gather pace. 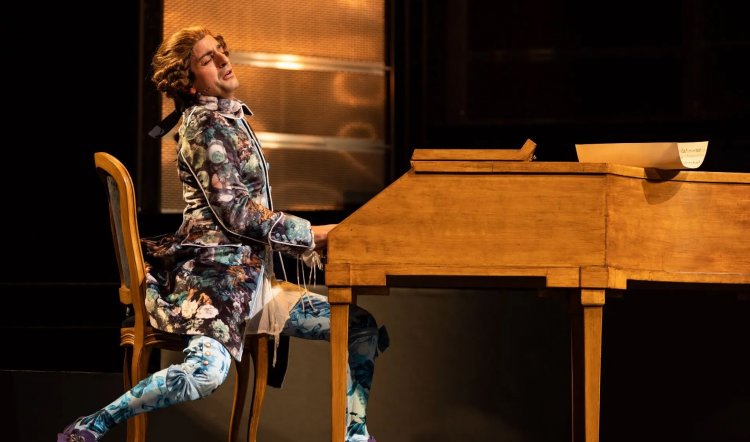 As well as the orchestra, there are some 40 actors, musicians, and singers on a typically Michael Scott Mitchell set of glittering metallic hard-edged geometry and staircases. The cast swishes and swoops in sumptuous extravagances of costumery by Anna Cordingley and Romance is Born, a lighting show by Nick Schlieper illuminates and defines the various levels, while an antique wheelchair on one small revolve and a grand piano on another are the concessions to ordinary life.

On opening night – and in previews, according to reports – the sound in the newly acoustically revamped auditorium was a problem for some. Sound designer Tony David Cray is a master of the difficult venue (think Handa on Sydney Harbour and Carmen on Cockatoo Island). Anecdotal grizzles about deafening volume – especially a roaringly-dramatic Sheen who might be in need of throat soothers before long – and an occasionally sludgy mix of voices and instruments, are balanced by those who had no problem hearing and enjoying.

It’s important to be able to hear as Shaffer’s conceit of a play – that the successful mediocrity Salieri (Sheen) may have poisoned the irritating genius and failure-in-his-lifetime Mozart (Rahel Romahn) – is as much about the words as the music. Happily, much of the important story progression is delivered by a pair of professional gossip gatherers, the Venticelli (Belinda Giblin and Josh Quong Tart). These two totter about in identical Baroque body suits and are consistently splendid.

Not surprisingly, the women get the rough end of the pineapple, both in life and in stage time. Blazey Best as Mrs Salieri takes one significant walk across the stage that says as much about her self-righteous husband’s handsiness as any confession on his part. As Mozart’s wife Constanze, Lily Balatincz is a portrait for the ages of an ordinary human married to a wayward and impossible genius. 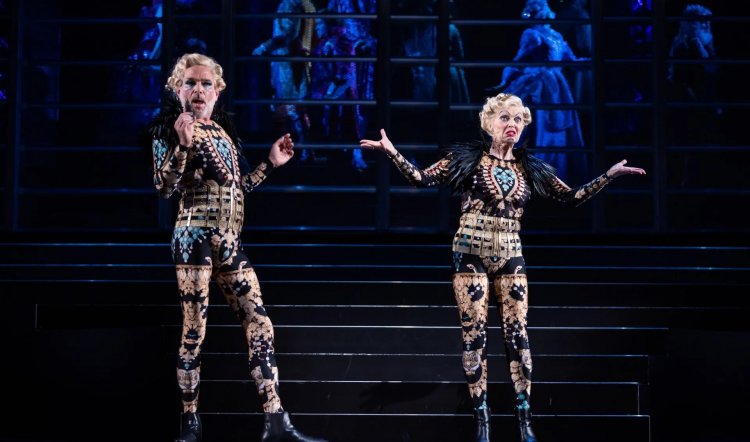 Elsewhere, Toby Schmitz makes much of the Emperor-as-buffoon, and his complaint that a composition has “too many notes” is as artfully and memorably delivered as Lady Bracknell’s “a handbag?” Sean O’Shea as devious operator Baron Gottfried personifies the awfulness of Court life along with Michael Denkha’s bumptious Count Orsini-Rosenberg.

Director Craig Ilott has envisioned a gleaming, shadowed, out-of-time milieu for his characters and has them inhabit it with bold performances and eye-candy tableaux. However, quite why he permits or encourages, Salieri to bellow quite so loudly and for so much of his considerable stage time is a mystery; and one that needs fixing, tout suite. “Less is more" would deliver dividends. In contrast, Romahn’s Mozart is a wrenching, nuanced performance as a man whose arrested development at giggling, poo-obsessed brat stage could not smother his musical brilliance and intelligence.

In the end, despite current acoustic snarks, this Amadeus is a unique melding of live music, drama, glorious voices and performances, humour, and visual spectacle. It’s not to be missed.