When this co-production with La Scala first opened in Sydney in 2020, Natalie Aroyan, in her role debut, shone as the vengeful warrior queen Odabella. And she does that once more in a full season of the early Verdi revenge tragedy. Her powerful and warm soprano, mature and beautifully controlled, fills the theatre with ease and clarity in a spectacular performance.

It’s especially noteworthy as she has to contend with crowd favourite tenor Diego Torre as her lover Foresto, and visiting Ukrainian and magnificent bass Taras Berezhansky in the title role, as well as ever-reliable Michael Honeyman as the Roman general Ezio (replacing a seriously indisposed import). Together with the typically fine work of the OA Chorus in a work of delicious musicality, this production rides on its singers and they carry the night more than usual. And that’s quite an achievement in the circumstances.

Director Davide Livermore and set designer Giò Forma have burdened the company (and revival director Kate Gaul) with staging of such lumpen conservatism it’s difficult to believe it isn’t a send-up of 1950s opera. The set – monumental Roman ruins, plus contemporary scaffolding and battlements – seems to have been envisaged for La Scala (stage width 20.4m) rather than the famously petite Joan Sutherland (stage width 14.03m). The effect is overwhelming and clumsy with scene changes involving gloomy, minutes-long mini-intervals while various parts of ancient Rome are shunted out the back. If one intends to destroy dramatic tension and its build-up, this is an excellent way to do it.

The 1950s effect is further enhanced by having the soloists sing out to the audience having been plonked, individually or together, in a straight line downstage. This static placement of singers hasn’t been seen in decades and there’s no reason for it now. It’s particularly noticeable as the massed chorus and extras are mobile and flexible as they morph between groupings of massacred peasants and hordes of fascist soldiers and, in a party scene late in the piece, some weirdly Weimar decadence.

Livermore set the drama in a 20th-century, post-war, bombed-out city. As well as the foregrounded physical Roman ruins, upstage is given over to vast video projections (by D-Wok). Passing cloud formations are alternated with urban destruction uncannily reminiscent of present-day Ukraine. There are also interpretations of artworks, such as Raphael’s Vatican fresco of Pope Leo I meeting Attila the Hun in 452, made kitschy with waggling arms and banners. It clashes mightily with B&W documentary-style footage of the child Odabella fleeing her father’s killers – an event she and the audience witness. The overall effect is overwrought and jarring, and of course, distracts horribly from the singers’ efforts.

Speaking of distractions. Unless you’ve been asleep for the past few weeks, you will know the production features “live” horses. This is supposed to be one of the production’s great attractions, but as Attila isn’t aimed at small children, you have to wonder how that works. There are just two horses, one handsome dark creature who stands, docile and statuesque for a minute or two while Attila sings. 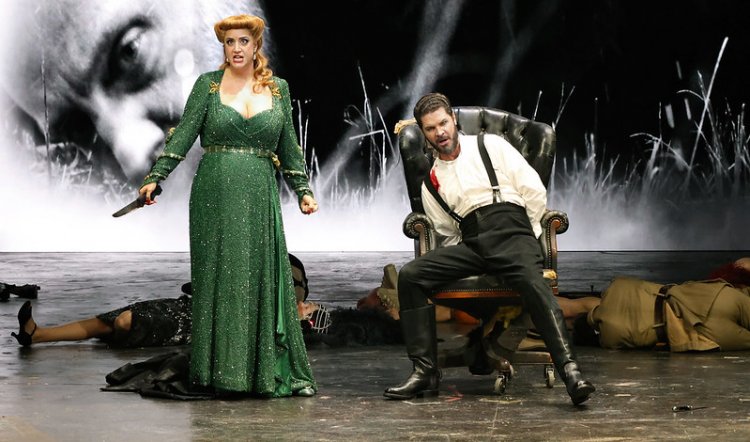 The other is the whitest of greys and is rather more frisky. This is unfortunate for Richard Anderson’s Pope Leo, but with God’s grace, he manages to stay aboard while being led about and posing for a rather gorgeous tableau. Incidentally, reviews from La Scala reveal that the production’s grey was also not the best behaved! Either way, it’s unlikely the audience would be aware of what was being sung or what else was happening on stage while the animals are grabbing the headlines. And being upstaged by 400 kgs of unpredictable, hard-hoofed equine must surely be particularly galling.

All in all, the music and singers – soloists and chorus – shine, under conductor Andrea Battistoni, despite the bizarre visual mess surrounding them. Meanwhile, we can look forward to Aroyan in Aida next winter and hope to see rising star Berezhansky again before too long.