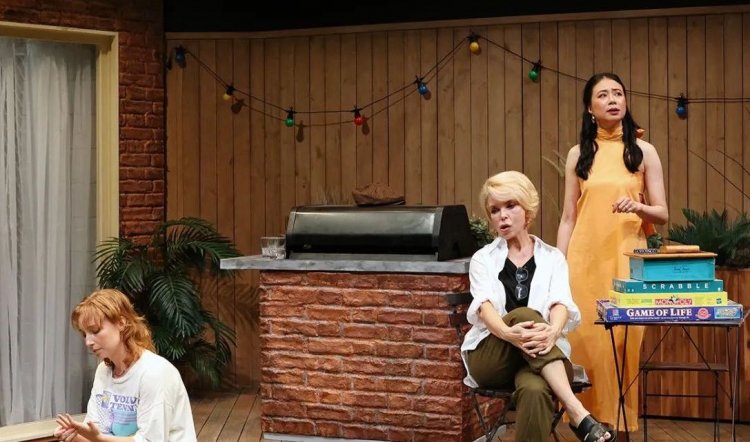 The two new Australian “Christmas” plays programmed by artistic director Mark Kilmurry to end the Ensemble’s 2022 are a terrific idea. Hilary Bell’s newly-envisioned version of Dickens’ A Christmas Carol is playing turn and turn about with this one - Boxing Day BBQ – Sam O’Sullivan’s nod to the same literary classic.

The play opens with a flat-capped ghost of Christmas Past – actually last year – as Dad delivers a piquant soliloquy on the state of play in the world, referencing Frank Capra’s It's A Wonderful Life. The curtain goes up on a suburban backyard. Fairy lights are strung along the fence and the paper and glitter detritus of the (Christmas) night before litter the lawn. And the state of play continues with radio commentary on the Boxing Day Test from Melbourne where Seth Effrica is the opponent. So far, so sharply sketched.

In common with many family Christmas gatherings, rather than jingle bells, there is tension and the promise of squabbles in the air. Peter (Brian Meegan) has assumed the mantle of patriarch but clearly lacks his dad’s authority and is irritating rather than avuncular. His sister Connie (Danielle Carter) is in a stitch after previously showing husband Morris (Jamie Oxenbould) the door for what he thinks is a separation but she intends as divorce. Meanwhile, he pops in to check on his bees, but they’ve not returned to the hive after “absconding” – an apiarist’s term, apparently. 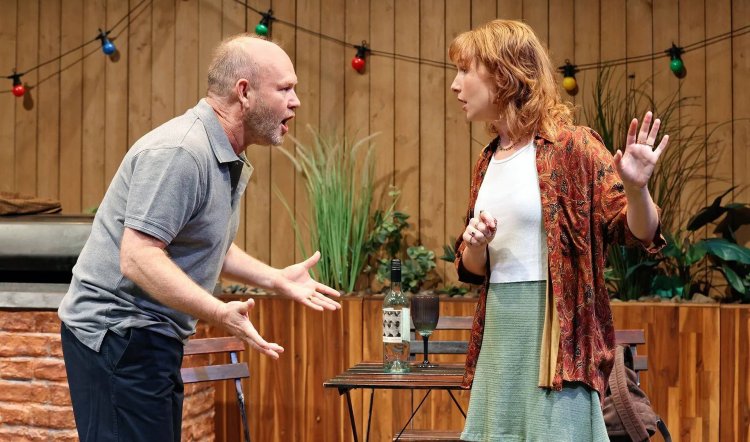 Peter’s daughter Jennifer (Harriet Gordon-Anderson) has her own hot coals to walk over as she is about to spring an unwelcome surprise on her dad. She’s volunteered to spend a year on an eco-warrior ship documenting its activities on video. Her newly-acquired uni degree is supposed to set her on the path to a career and money, rather than planet-saving nonsense. The generation gap is a yawning chasm.

Another, but different, yawning chasm looms in the form of Aileen Hyunh as Peter’s second wife Val. She is the sole person of colour in the company and Val is a neo-con, flat-earther, science denier whose mantra is “The jury is still out on [insert irrefutable scientific fact here]…” And who is also a hustling bossy-boots with the empathy quota of a robot. Hyunh is good in the role, which – for me – made it increasingly unpalatable. Her character reminded me of The Adventures of Priscilla Queen of the Desert and Julia Cortez as Cynthia Campos. Who could forget the nightmare figure of the former Bangkok entertainer turned screeching harpy mail-order bride? Her party piece was shooting ping-pong balls out of her vagina, a skill that audiences of 1994 apparently found hilarious. Would this awful racial stereotype still be a permissible figure of fun today?

Catching up at the Sunday, 5 pm show ensured a full house of the kinds of folk at whom playwright O’Sullivan aims his politics and satire. They probably voted for Tony Abbott and his ilk over the years yet may finally have been moved to vote Teal but would sympathise with Peter rather than his idealistic daughter. The predictable harangues on the parlous state of the planet and its leadership and indifferent citizens are delivered lecture-style to little effect: mostly going over the assembled heads or in one ear and out the other. (There was very little laughter although final applause was warm.) 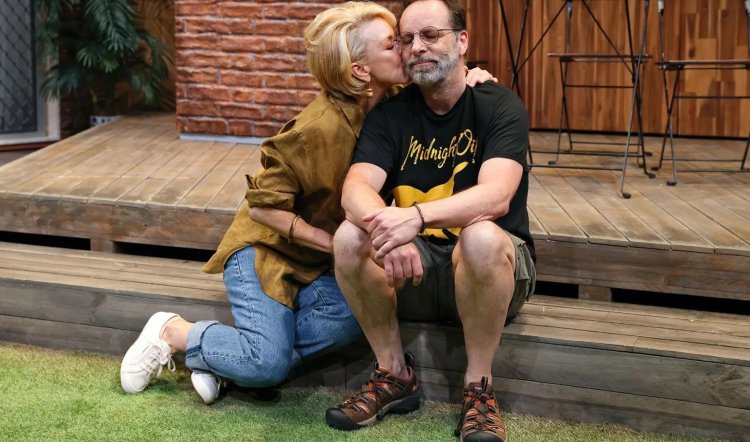 As is often the case when Jamie Oxenbould is present, he’s the one who captures attention. It’s not just his hopeless, gentle, puzzled loser Morris, and it’s not that the others are not fully formed and fine in their roles, it’s more that Oxenbould has an “it” factor that always plucks at the heartstrings or tweaks the funny bone.

The set is shared with A Christmas Carol and designer Ailsa Paterson has made ingenious additions and subtractions that suit both very different shows. Similarly with Mat Cox’s lighting, and David Grigg’s soundscape of cicadas, sirens, and the eventual approaching crackling roar of bushfire is highly effective.

Boxing Day BBQ could do with a bit of a trim and tidy-up to bring it back from a somewhat saggy and repetitive 120 minutes (with interval). Bee fans might be tickled by a late intervention from the insects, but others could be bewildered by this sudden flight of whimsy. Either way, we surely all know how important it is to save the bees, not least because they’re funny – thanks to Mark Kilmurry’s deft direction.