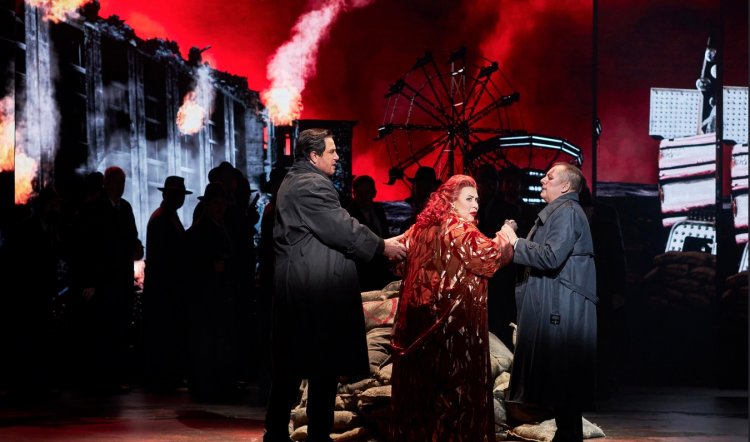 On its winter 2022 opening night, Davide Livermore’s new production of Il Trovatore was dominated, in the opening act, by the visual spectacle of Giò Forma and D-Wok’s digital stage design. Not that the visuals were entirely overwhelming – viz the pulverising David Scott Mitchell/Graeme Murphy Madama Butterfly – but rather, there was some wayward singing from principals Leah Crocetto (Leonora) and Yonghoon Lee (Manrico) which suggested we might be in for another cold/flu marred evening. But no.

Crocetto’s over-forceful early efforts seemed to calm and gain richness as Lee grew in power and assurance. He over-rode the threatening croak to give the glorious voice so familiar to Sydney audiences and so important to the success of this demanding Verdi melodrama. Happily, however, as the opera opens with a bit of bass storytelling by the count’s man Ferrando, David Parkin was a thrilling solo presence to get the night underway.

In a letter Verdi wrote to the original librettist he wanted nothing tame, “the more unusual and bizarre the better”, and he certainly got that. The “story” of Il Trovatore – the troubadour – is complicated and overwrought even by the often-complicated and overwrought standards of 19th-century opera. There is unrequited love, jealousy, revenge, and hate. There is a witch burning and the quest for vengeance by her daughter. There is mistaken identity – a son is not his mother’s son – and a couple of babies are thrown in a campfire, one for revenge, the other through a ghastly mistake. 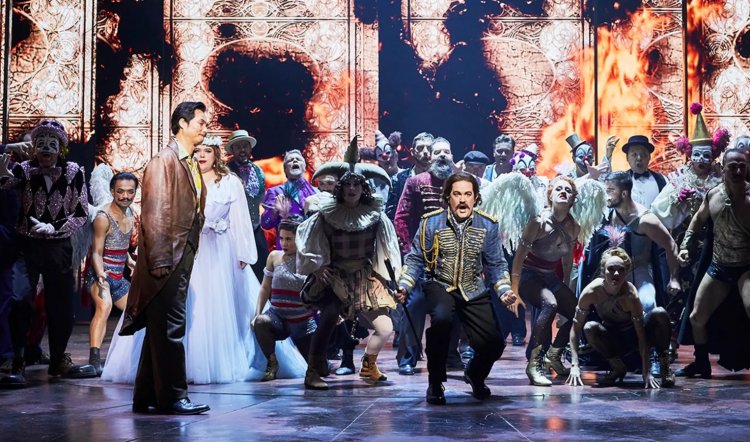 Triumphing over all, however, is the sublime music gifted to the four principals: Crocetto, Lee, Elena Gabouri as Azucena, the vengeful daughter, and Maxim Iniskin as Leonora’s would-be suitor, Count di Luna. There is, of course, much for the chorus in this famously musical feast and the OA Chorus and Orchestra under Andrea Battistoni, are more than electrifying in their roles. In particular, the virtual pop anthem of the Anvil Chorus is revitalised in its staging and the chorus’s nuanced delivery.

The singing company is augmented in their endeavours by a mob of acrobats and other carnival and circus figures instead of mere “gypsies” – here called Romani. Their colourful presence (costume designer Gianluca Falaschi) complements and knits together the onstage humans and the digitally realised Tarot imagery on the floor-to-ceiling flats. These glide back and forth and around into place to form a variety of playing spaces and backdrops. Although still too busy, they are employed more judiciously and much more effectively than in the previously mentioned digital extravaganza (if you’ve got it, use it and don’t ask why). As well, the seamless switching between the ornamental images – including a disturbingly swiveling eye (of Horus? The Third Eye?) – and the enlarged and enhanced photographs of structures is evocative and effective. Beneath swirling storm clouds is an abandoned Ferris wheel and other fairground structures.

Dominating these is a multi-storey factory or warehouse. Which could be somewhere in Ukraine, in its grimly Soviet-era architecture. In one scene it’s on fire, in another is “entered” and seen as a vast beamed hall, and in another as a bone-chilling prison cell – all via the arrangements of flats and John Rayment’s lighting. There is much to look at, as well as to hear because somehow, the visual elements become one with the score which is, of course, vivid, discomfiting, grand, emotionally charged, luscious, and memorable – and much-loved despite the vicissitudes of the plot(s). 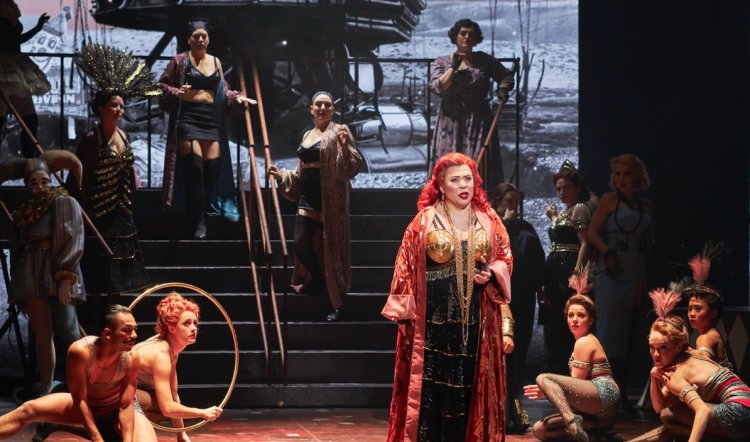 On the night, Elena Gabouri’s Azucena rose above the spectacle, while Sian Sharp, Iain Henderson, and Thomas Strong were exciting in supporting roles. This is a production that deserves to be in OA’s repertoire as long as its Elke Neidhardt-created predecessor.  A sadly short season – this time – don’t miss it.