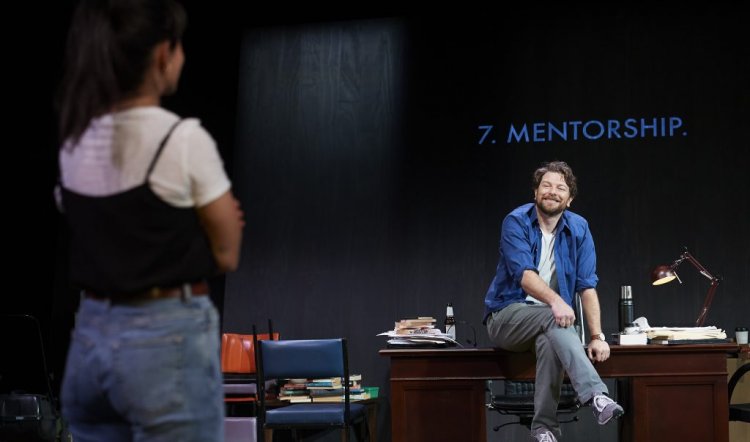 Prolific Canadian playwright Hannah Moscovitch works on a ground-level human scale whether her subject is, for instance, the enormity to be found in three soldiers’ recollections of Afghanistan (This Is War, 2012). Or the life and death plight of young women pre-legal birth control (What a Young Wife Ought to Know, 2015); or even the 99% privilege of the 1% ruling class in Post-Democracy, 2021. And in 2020’s Sexual Misconduct of the Middle Classes, the territory is the first world explosion of interest in everything #MeToo. Or is it?

Annie (Izabella Yena) is a first-year student, age 19, who sits in a front-row seat, dressed in a bright red coat, and therefore immediately noticed by her lecturer, 43-year-old Jon (Dan Spielman). Before this occurs, however, Jon has taken the audience gently by the hand and with twinkling, self-aware, sexy charm, coloured in the portrait of who he is and how we got here from there.

Jon’s third marriage has just imploded with his wife removing herself from the marital home close to campus to a downtown apartment, an “investment property that turns out to have been more of an escape strategy”. Meanwhile, Jon is 100 pages into his latest novel – he is also a best-selling author, of course. And although it’s about 19th-century lumberjacks which naturally raises chortles in the audience, he is such an archetypal figure of male success and power, not even a lumberjack can derail his rockstar aura. 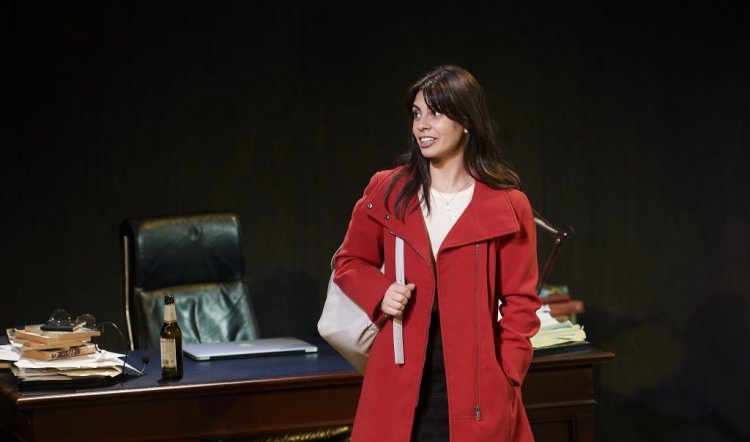 Annie is smitten, Jon is smitten. We know Annie is smitten because Jon says so. Jon says most of what is said for most of the action. Annie is a beautiful cipher; an enigmatic presence until she gets mad and gets even. Director Petra Kalive blithely conducts actors and props and elements of the set – including a noisy motor mower – in a way that reminds of a magician’s sleight of hand in misdirecting the attention of watchers.

Marg Horwell’s original set and costumes (the production comes to Sydney from Melbourne Theatre Company) and Rachel Burke’s lighting are obviously theatrical as Jon is brightly skewered in otherwise dark states like a specimen butterfly. At the same time, Annie flits back and forth in brighter and softer illumination that nevertheless obscures her intentions. Theatricality too in the Brechtian scene descriptions flashed up on the back wall and sound designer Darius Kedros’s minimalist and witty punctuation of the action with the unmistakeable sound of fingers typing on a computer keyboard.

The classic student-teacher affair is turned on its head at least once during the course of the play’s 90 minutes, and not only because of the overwhelming shadow now cast by #MeToo. To go further into the relationship and its consequences would mean spoiler alerts galore and also render the play pointless as its final line of dialogue actually is the point. 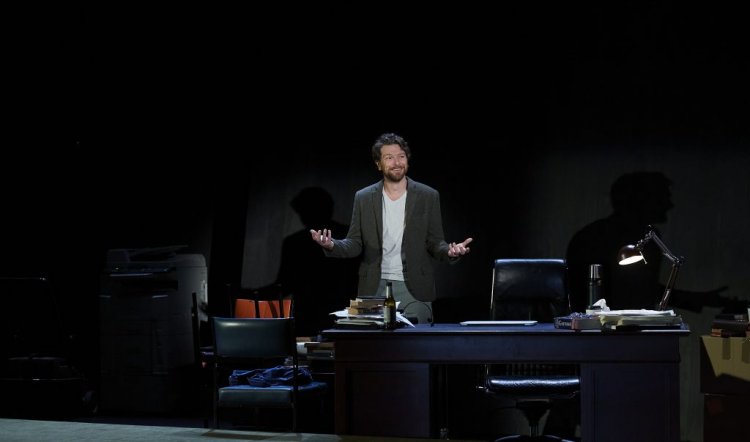 The play is absorbing, often funny, and always intriguing – to a middle-class audience, given its title and protagonists. And the occasional involuntary groans and gasps from the audience not only add to the comedy but also underline how familiar are the tropes and perils of male-female power plays, sexual inequality, and age-gap romances. In other words: who hasn’t been there and even now gets the shivers over the possible or actual consequences?

Nevertheless, the final scene and ending are arrived at abruptly and are almost perfunctory. Given who is allowed to be perfunctory, it could be said that it’s deliberate, it’s also unsatisfying from an audience point of view, however, and highlights the question that remains afterward: why? And why bother? Again, the answer possibly lies in the title and one has to be sufficiently interested in it to be fully invested.

Dan Spielman’s Jon, in particular, is an always compelling presence, while Izabella Yena makes the most of a character of wraith-like thinness. Sexual Misconduct of the Middle Classes really boils down to what Sandy Stone would have slyly disparaged as “a nice night’s entertainment” and many want just that.