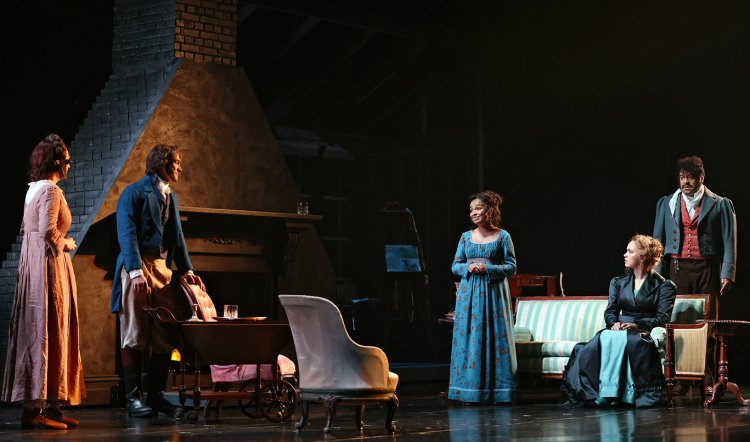 THE TENANT OF WILDFELL HALL

The epistolary novel should come with a warning to would-be dramatists: a letter – or diary, or journal entry – is not the easiest prose to turn into dialogue. A further warning might also be: when portraying events and characters separated by a gap of eight years and in most instances by actors playing several roles, great effort must be made by playwright, costume designer, actors, and director to make the differences reasonably easy to see, if the audience is not to be left floundering for precious minutes of bewilderment.

Trouble is, it cannot be assumed that everyone has read the original novel, given that part of its attraction is its relative obscurity. And it cannot be assumed that everyone will be sufficiently sharp-eyed to pick that a quiff in one scene and flattened hair in another means the man with the quiff is not the man with flat hair, and so on. So the puzzled faces and whispered questions as the house lights go up for the interval are many.

Before the blessed interruption of that interval, however, there is the dullest hour-plus of repetitive exposition (that fails to expose) since whenever; as well as simpering attempts at the ways of Victorian gentlefolk as have ever been plonked on a Sydney stage. While it’s fashionable to sneer at 19th-century fops ’n’ furbelows screen drama, it would actually be useful for otherwise clueless actors to see how to comport themselves for credibility’s sake, if nothing else. 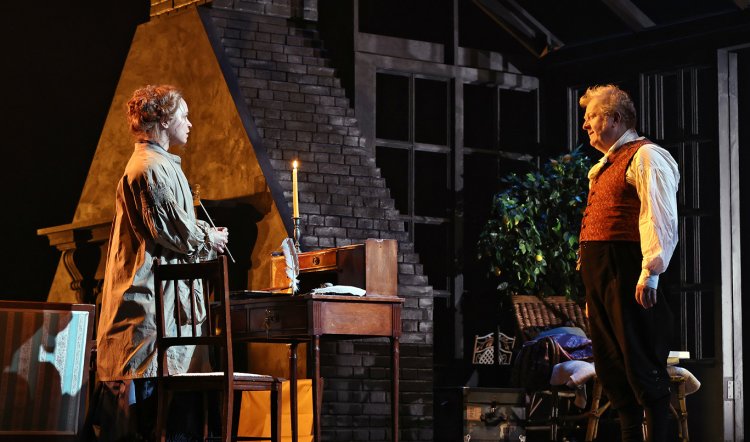 Another way of coping with the nuances of the period, as well as what’s required to persuade in doubled or trebled roles, would be to pay close attention to Tara Morice. She is tasked with making something of Rachel the maid, Mrs Markham, the hero’s mother, and the hero’s Aunt. She is clad in a plain brown gown over which go either a drab coat, a long white pinny, or a bonnet – depending – and as well as these visual clues she (gasp) acts convincingly and successfully in each role.

Also attention-grabbing as actors, despite their visual hindrances, are Steve Rodgers as the avuncular Reverend and boofy be-quiffed Walter Hargrave; and Anthony Taufa as Frederick Lawrence and Lord Lowborough, these two differentiated by an ill-combed pompadour.

The rest of the cast is a melange of ugly-to-plain-to-pretty gowns, poorly tailored coats, various styles of breeches, and scraggy boots. These actually do fit the bill in representing a middle-class rural community, but the actors inside them don’t seem to understand their roles nearly as well as do their costumes (by Renee Mulder). The result is a swirling blur of semi-similar men and women that does nothing to disguise the static nature of the first half. 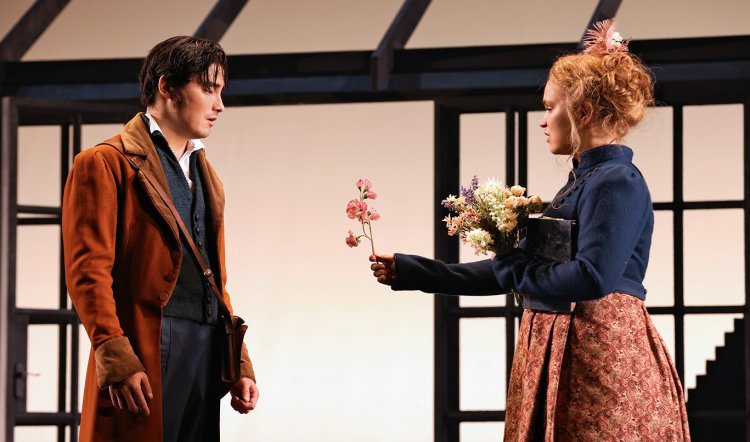 Apparently, playwright/adapter Emme Hoy and director Jessica Arthur were drawn to Anne Bronte’s classic because it’s said to be the first feminist novel. Also, its depiction of spousal abuse and an uppity female is not only apposite in 2022 but also caused apoplexy in early Victorian England. Not quite as scandalous as its other major topic: a young woman taking her small son and leaving a violent marriage to set up on her own as an independent, self-supporting artist. Eye-opening to us, perhaps, is that Anne Bronte and Queen Victoria were virtually the same age, although universes apart.

The second half (for those who left early) is an improvement on the first as the production finally gathers a little pace along with the stylised country home set (Elizabeth Gadsby) which makes some interesting circles and back-and-forths with neatly-choreographed movement by members of the cast. The black cavern in which this colourful little world is placed is lit sensitively and lusciously (Trent Suidgeest), while Clemence Williams’ intriguing score underpins the whole. It’s anachronistically supplemented late in the piece and live at the side of the stage by actor Eliza Scott whose vocalisations are at once effective and effectively draw focus from a generally unfocused company. It’s one of a number of WTF? moments that are more interesting to ponder than the play itself. Catching up at the Saturday matinee revealed that many in the politely-applauding audience were asking the same basic question. WTF? A major cut and polish to script and production would be a start.