Stephen Page ends his 32-year Bangarra career with a bang as a Juukan Gorge-like explosion rattles the Ros and the capacity audience within. Then, a steampunk bucket wheel excavator descends from on high and the troupe of dancers and actor-singers watch in horror as symbolic pillage of their land is wrought through music and light. (Steve Francis and Nick Schlieper respectively.)

Emerging from this all too familiar scene of mindless pursuit of (other people’s) land and riches come the ancestral bones and then the person of Wudjang – the mother. Brought to life by time-defying elder company member Elma Kris, she, together with younger foil Gurai  (“wonder” – Lillian Banks) are the sinewy and sinuous heart of the piece.

At its centre is the history of Australia’s First Nations peoples from the moment a Union Jack is planted by a burly explorer (Justin Smith). We are drawn through familiar tropes of colonisation, murder, displacement, disease, and despair. The script/libretto for the telling is the work of Page and Alana Valentine and, when it’s clearly audible, is potent. Unfortunately much is lost of this vital element in the general sound mix and lack of vocal clarity. It’s not sufficient to read it before or after and also presupposes a program might have been purchased – an unusual step these days. 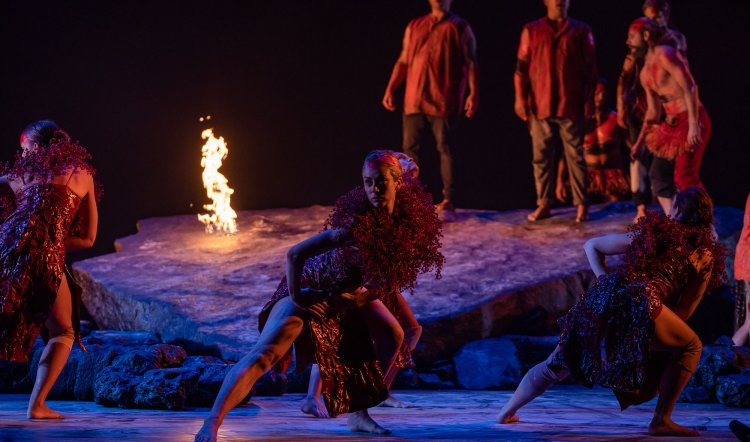 The historic accounting is subverted by a contemporary figure, singer/dancer (Jess Hitchcock), who is somewhat impatient with the past and is more interested in the present and future. Ceremony and lore eventually draw her in – not least because Wudjang/Kris is an irresistible force – and her induction into history is powerfully enacted over time and sequences of dance and dramatic song.

Prominent in singing and acting the various aspects of defiance and grief is Elaine Crombie. Her response to discovering a massacre of young men is gut-wrenching yet somehow understated and all too real and not melodramatic. The ballet performed by the men before their killing is in stark and credible contrast to the traditional dance forms that precede and follow the scene; and both styles are beautifully interwoven throughout, Bangarra-style.

The staging is a constantly moving visual feast of dancer-actors clad in Jennifer Irwin’s boundless range of costumes that evoke history, fantasy, the past, and the present with her customary facility and imagination. Jacob Nash’s set – beginning with the descending bucket wheel excavator – is dominated by a rock platform on and around which much of the action takes place. The musicians occupy a back corner and violinist Véronique Serret joins the company on occasion; rocks are scattered about and occasionally moved by the dancers. Colour is dominated by slate-dark rock and bronze-ochre light. And finally, by the optimistic bright yellow of wattle flowers. 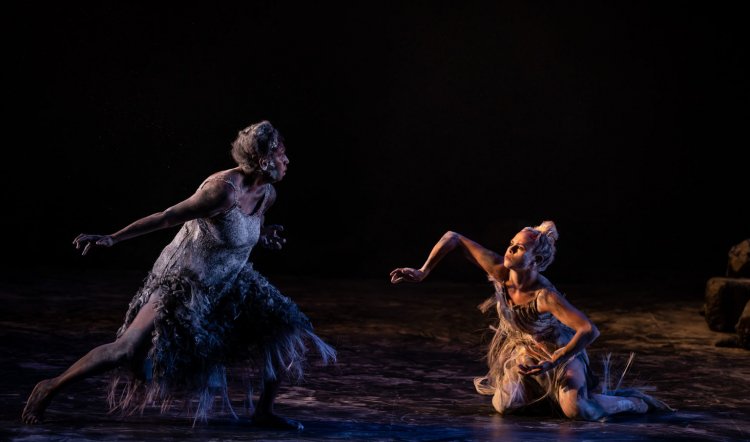 Page’s program notes refer to Wudjang as “narrative dance theatre and contemporary ceremony”. It could also be described as contemporary-traditional dance-opera given the unusual weight given to text and song. Alan John is the musical director and the score is thrilling and original, and beautifully integrated with recorded elements.

However, as the text is at once poetic, poignant, and crucial to the narrative – and is often obscured – it’s a pity that the collaboration with STC and the hi-tech Ros auditorium didn’t include surtitles. If this production is to travel successfully, being able to understand the text ought to be addressed.

The same could be said for the show’s conclusion. The extraordinary emotional highs are somewhat dissipated in the anticlimactic inclusion of at least three or four likely endings: choosing one and killing the other darlings would enhance the heart-wrenching pinnacle to which Wudjang ascends. Nevertheless, it’s an hour and 20 minutes of spectacular dance and drama and one has to wonder whether Stephen Page is really going to give away choreography for good. Recommended.