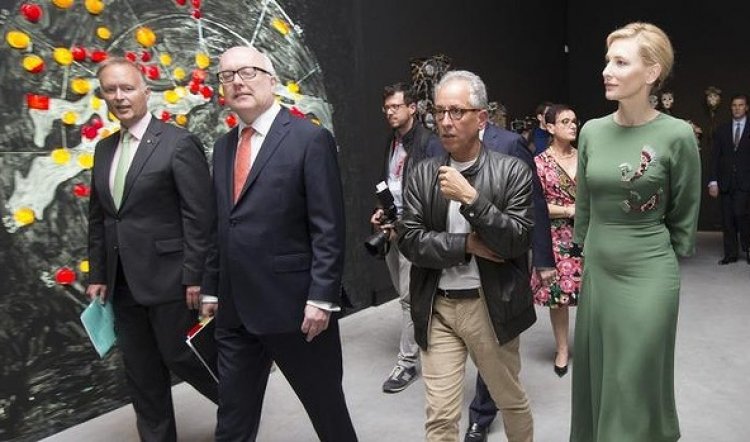 BY GEORGE HE'S GOT IT!

In Venice (above) Rupert Myer, chair of the Australia Council, Senator George Brandis, Minister for the Arts, Simon Mordant, Commissioner for the Australian exhibition at the Venice Biennale and Cate Blanchett.

Sickening how our politicians are only too eager to have photo ops with the likes of Hugh Jackman and Deborra-Lee Furness when it’s suits them (viz to wit Tony Abbott and adoption laws); and Cate Blanchett (pictured here with arts minister George Brandis at the opening of the Australian Pavilion at the Venice Biennale last week). But god help them – Cate in particular – if she does anything beyond diplomatic window dressing. (Remember the 20-20 Summit – how dare she have an opinion? And more recently, speaking at Gough Whitlam’s memorial – outrageous.)

Give a quid to know what she’s thinking today after turning out for Australia in Venice. And all the while the Senator’s unctuous smile was concealing $104.7 million in funding cuts to the Australia Council that would be announced just days later.

Not just funding cuts but a grab of that money for his own personal purview. This is an astonishing action, even by the standards of this federal government. The purpose is something called the “National Programme [sic] for Excellence in the Arts” and it will be administered by the Arts Ministry, that is, the Minister himself.

When the Council’s major fixed funding responsibilities to the big guns are taken into account (STC, OA, MTC, Australian Ballet, the orchestras and so on), the Brandis hijack will mean its discretionary cash – for artists and arts organisations not in the top tier – is cut by about 50%. And this on top of the cuts from the last Budget that have still to make their full impact.

Australia Council chair Rupert Myer came racing back from Europe when the disaster became clear. He too had been flying the flag in Venice – see photo above – and several dollars would be given to know what he felt like, having stood beside the Minister who had already shafted him, when the full import dawned. What he said was, “The announcement of the 2015-16 Budget last night included measures which will significantly impact the work of the Australia Council on behalf of the arts sector.”

Unfortunately, as chair of the OzCo, Myer was unable to say what he really felt which may have gone something more like, “This is an unconscionable and deliberate act of political bastardry.”

The shadow arts minster Mark Dreyfus is not so constrained however and he is quoted in the Sydney Morning Herald thus: “Mr Myer can outline at a practical level what it might mean but isn't in a position to say what a dreadful thing the government has done here. I can. What we can see here is a grab here for the Australia Council budget to be administered on a personal whim, without any explanation, or any peer review.”

And that’s the crux of the matter: peer review on the one hand and arm’s length (from government) on the other. How this will play out is already apparent in the first statement by the Arts Minister on the topic: “Arts funding has until now been limited almost exclusively to projects favoured by the Australia Council.”

The language used in that short statement is crawling with weasel sentiment and dishonesty. Quite astonishing. And it goes on.

Brandis’s new toy – you may recall it’s snappily titled the National Programme for Excellence in the Arts – will ”deliver a number of government priorities including providing national access to quality arts and cultural experiences”. 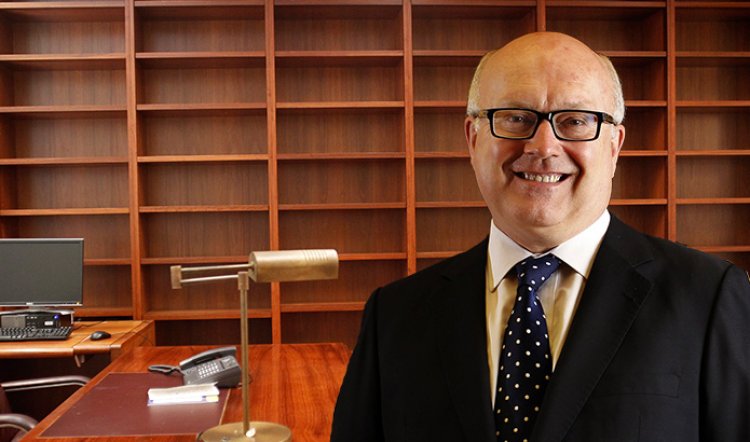 Yet more nonsense, mischief and disingenuous weasel wording. The clear implication of the title is that excellence in the arts has hitherto not been available or provided. Take that! Australia Council. And the slimy wording of the new delivery is more of the same: “quality arts and cultural experience” – clearly insinuating that the OzCo is not, has not and cannot do quality arts and culture. And George can.

The next question is, what does George Brandis mean by “quality” arts and culture? What is his idea of “quality”? Well, from the extra dosh ladled out by him to Opera Australia he must surely believe the bankrupt artistic vision of that company is quality.

In January he handed over (an admittedly hilariously measly) $100,000 to help Leo Schofield relocate his BaroqueFest from Hobart to Brisbane, but in also turning up for the inaugural shindig Brandis was saying something else about his idea of “quality” – and it definitely isn’t anything to do with experimental, fringe, innovative or cutting edge.

And that’s the trouble – the serious, serious trouble. The Australia Council is already severely hampered by having to absorb and deal with more than $7 million in “efficiency savings” to take place over four years. And now will have $185 million to allocate to those artists and organisations left out in the cold by the above. And despite what that may sound like, it is not a lot of money.

Likely victims of this move are the small to medium companies and also – serious long-term repercussions here – the youth and children’s theatre sector. Reported in the Sydney Morning Herald, Fraser Corfield, artistic director of the Australian Theatre for Young People said he thinks it could be a “devastating move” for those without ministerial access.

“My fear is that it will disproportionately advantage the larger, better connected arts organisations and companies,” Corfield said. “Looking at the youth theatre sector, which is nationally the smallest and least funded of arts organisations, it's going to be very difficult to get traction in that sort of funding environment.”

And its from such companies – and those on the fringes, the regions and the oddball end of the spectrum – that the future of Australian arts and culture will come. Or not, if the Minister has what would appear to be his way. And it has to be seen as his way in order for the National Programme for Excellence in the Arts to make any sense. If he and the government don’t want to do a Menzies then what is the NPEA all about?

The whole point of the Australia Council was – as its father Nugget Coombs understood only too well – to stop politicians interfering. The reason they need to be stopped is because what artists do with the money is none of their business. Although lazy media and deceitful politicians refer to the money as “government funding” it is not. It’s public money and if politicians don’t like what they see or hear because it offends their politics, it’s just too bad.

Unfortunately, this fact has been largely overlooked or forgotten in recent years and this is obvious from the reporting of the Budget: none of the major pundits has so much as glanced at the personal grab of arts funding by the arts minister. And it’s arguable that the bedrock significance of the arts and culture to this society and its future is actually way more significant, in the long run, than payments to stay-at-home mothers and cuts to this and that.

Without a healthy and independent arts and cultural life – free of political interference and free to develop – Australia will only regress even more and quicker than is now happening. We owe it to the future – to the children whose art, music, theatre and cultural lives are at risk – to not take this lying down, as usual.