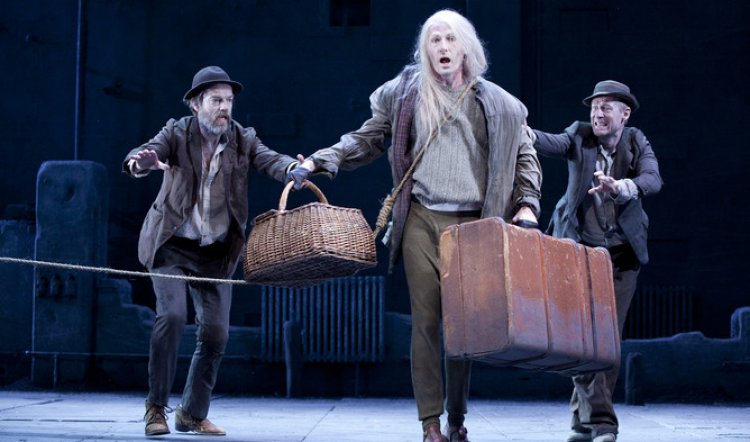 HOW TO SUCCEED IN SHOWBIZ

The Sydney Theatre Company arrives in London next week as part of an “International Beckett Season” at the Barbican. And Australia’s contribution is, of course, Waiting For Godot  with Hugo Weaving, Richard Roxburgh, Philip Quast and Luke Mullins in Andrew Upton’s rightly celebrated 2014 production.

Beckett fans can also sign up for the British premiere of Robert Wilson’s version of Krapp’s Last Tape, or another solo show: Lisa Dwan in the trilogy Not I / Footfalls / Rockaby  (that’s the disembodied talking mouth show made famous by the late Billie Whitelaw). And Beckett’s first radio play All That Fall  will be presented by Dublin’s Pan Pan Theatre.

Rough For Theatre I and Act Without Words II will be performed somewhere around the exterior of the Barbican in the middle of June, weather willing, directed by Sarah Jane Scaife and featuring an all-Irish cast including Bryan Burroughs, Raymond Keane and Trevor Knight.

Olwen Fouéré, recent visitor to Sydney with the mesmerising riverrun – the voice of the river in James Joyce’s Finnegan’s Wake – will this time be reading Beckett’s short prose Lessness.

And if you’re all Becketted out after such riches you’ve got Benedict Cumberbatch’s Hamlet  to look forward to.

Meanwhile, across town to the Finborough and Wayne Harrison’s indie production of The One Day of The Year is putting up “Sold Out” notices (I haven’t been able to get in as yet - sigh) and is gathering good reviews despite some critics being a little bewildered by the yawning chasm between the cultures of the Old Country and its Rude Offspring illustrated in Alan Seymour’s great play.

Enthusiastic attendance at theatres large and small across the capital isn’t the only difference between London and Sydney. Extensive research carried out for Ticketmaster in 2013 revealed some eyebrow-raising facts: 63% of the UK population had been to at least one theatre show in the year under review. (More than sporting events and live concerts, the survey remarked.)

People reported liking special access schemes, sponsorships and memberships that give benefits (better seats, discounts etc) and said these would encourage them to attend more often in future. Startling finding: the stated likelihood to attend the theatre peaked among 16-19-year-olds. And UK theatre audiences are becoming younger and have been for some time – with a 71% increase among 16-25-year-olds since 2009. But the majority of theatre-goers are 25-44.

Cast and crew members will be thrilled to learn that of all the “perks” made available to punters the only ones that scored lower than “meet the actors” (just 4%) were “free cloakroom” and “added offers from other brands” (1% each). So companies could maybe stop dragging their actors and crews out to be patted and prodded by the public and just get on with making theatre. 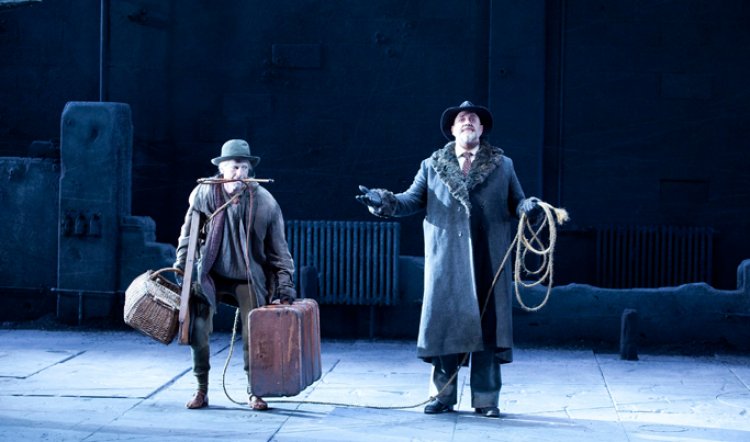 Cost and availability of tickets are, not surprisingly, the most mentioned barriers to attending while those who don’t go to the theatre list “lack of interest” as the main reason – really?! Checking phones during a performance was admitted to by 29% but on the bright side, only 8% thought that was okay behaviour. And (interesting for Sydney’s subscriber companies) 83% of theatregoers plan their shows two or more months ahead and only 14% are in any way spontaneous about buying tickets. (US and Australian visitors stood out as being most likely to buy on the day.)

Preferring good seats to affordable tickets had people split at 44% each, while how the tickets were purchased varied with the age of the buyer: oldies using the theatre box office more often than younger buyers who tend to go online.

Interactive theatre – often site-specific, obviously participatory and also experimental – was also more attractive to younger audiences; although a majority of audients of all ages (67%) still reckon that if God had meant us to do audience participation She wouldn’t have invented actors.

Unremarked by the study’s compilers however, was one set of figures that hints at the reason behind the growth of audiences and the youth of that growth: 31% had read the script and, of that group, a third had done so before the performance and the rest grabbed it afterwards. And that strongly suggests a school and/or educational imperative that was not within the study’s brief and had not been explored.

So, what did the study conclude? That theatres should encourage two-way involvement with audiences, word-of-mouth being the powerful generator of ticket sales that is it, and “share” their experience – which at least one Sydney publicist is trying. (“As one of our favourite celebrity bloggers we’d love you to live tweet your reactions tonight.”) Even though that doesn’t tally with the clear disapproval of phone fiddling in theatres.

Clearly targeting audiences – neither dissing nor antagonising the older and younger, the neophytes and theatrephiles with inappropriate marketing approaches – was something they were very keen on and also trying to capitalise on the overlapping interests (so Belvoir’s advertising in the Verona/Chauvel/Dendy cinemas is bang on target).

And finally, keep building those membership and patronage schemes: draw in your people with expressions of sincere appreciation and hot deals. That applies to sponsors too, of course, because in the end people love to belong and to feel loved. It’s what makes the Globe go round.