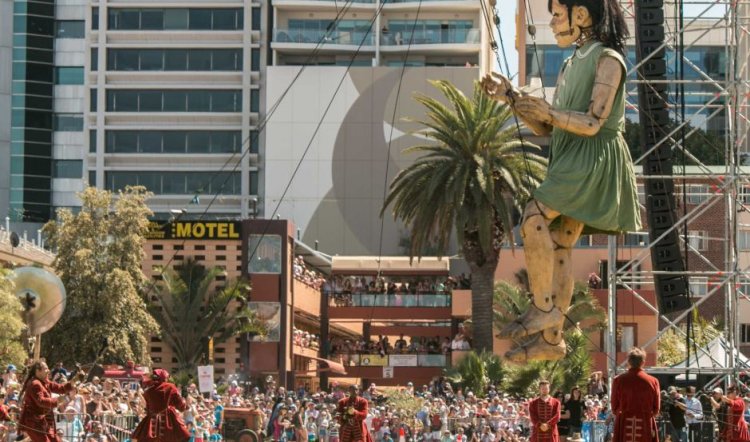 THE GIANTS – in Perth and reported by Catherine Dennison. Photos: from the ABC’s online news bulletins.

Apparently Sydney Festival wanted The Giants to visit, but the state government wouldn’t assist with the necessary funds, so they’ve been in Perth instead – with state and private funding provided by a more imaginative bunch of purse-strings-holders.

According to news reports, the visit of the puppets to Perth International Arts Festival is estimated to have been seen by 1.4 million over the weekend and WA Tourism’s Evan Hall reckons they brought about $5millions-worth of spending to the city. Even better, he says, “I think the mood that was generated by The Giants just showed what a fantastic city it is to have a good time in...It’s events like this and some smaller scale events that really do turn the lights on and make the city active.”

And here’s the point of view of one of the people in those crowds that turned Perth CBD into a joyous place: CATHERINE DENNISON, who writes...

“Here is the Giant Girl. She wandered the streets of Perth over the weekend. There was a story to go with the visit by The Giants, but unless you attended each performance it was impossible to follow, but didn’t really matter. The event also featured a performance by Yirra Yaakin Theatre which, for me at the back, was unfortunately obscured by the crowds!

“That said, I saw a 6-metre “little” girl stand up, get dressed and make her way through town, first by boat before debarking and walking the rest of the way. It was magical, maybe it’s the memory of the little girl in me who desperately wanted her dolls to come alive, or maybe well executed puppetry has its own articulate language that we tap in to. 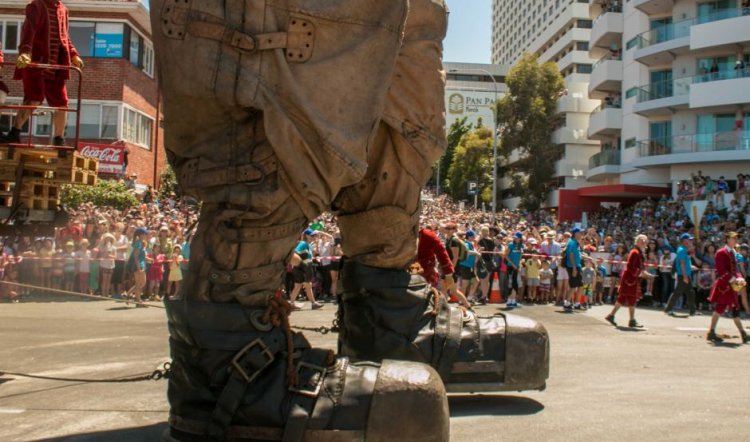 “As the girl was loaded on to her boat, six drummers played from their perches on the roofs of six cars. Each of the cars was itself welded to the top of another car which was driven around the area of the park sectioned off for the performance. They preceded the boat on its trip around Langley Park, with a rock band travelling by truck at the rear. During the course of the procession the boat and drummers were abandoned and The Little Girl was accompanied by a single musician and her Lilliputian puppeteers.

“At the end of her morning walk, The Girl read stories with local school kids. I didn’t see it but she walked back via a different route in the afternoon and was tucked in to bed in Langley Park at the end of the day.

“The Diver was asleep when we visited, but he woke the next day to try and find the Girl. Unfortunately I couldn't get back into the city centre, but I’m in the minority. Figures suggest well over half the population of Perth came out to see them over the weekend!”