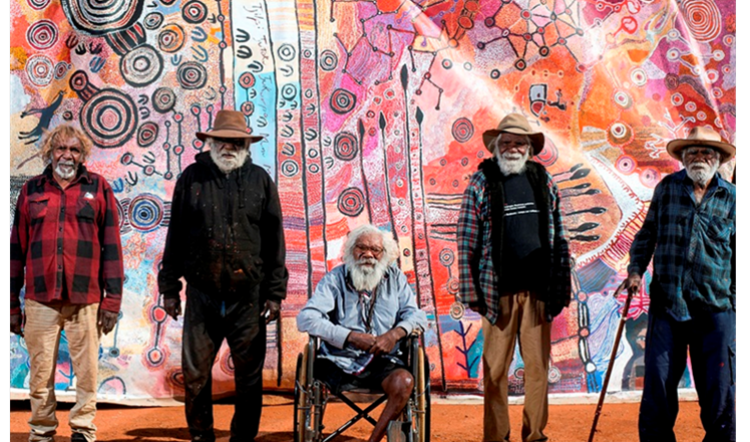 THE PIT LANDS COME TO TOWN

Right in the middle of the continent – flown over by most on their way to somewhere else – are “the Pit lands” – properly Anangu Pitjantjatjara Yankunytjatjara Lands (APY). Situated across a vast area where the borders of South Australia, Western Australia and the Northern Territory meet, it’s about as remote as you can get.

Remarkable contemporary art has been made here since the 1970s but it’s really only since the five Ken Sisters, from Amata (due south of Uluru over the border in South Australia) won this year’s Wynne Prize that the city has sat up and taken notice and said, “who? What? Where?”

Answers to these questions and more will be available at Hazelhurst Regional Gallery & Arts Centre in southern Sydney when an ambitious exhibition opens in October. Work by 50 artists will be shown originating from the seven centres of APY Lands: Tjala Arts at Amata; Ernabella Arts at Pukatja; Mimili Maku Arts at Mimili; Tjungu Palya at Nyapari; Ninuku Arts at Kalka; Kaltjiti Arts at Kaltjiti, and Iwantja Arts at Indulkana.

It’s a huge undertaking for a regional gallery and all power to Hazelhurst’s director Belinda Hanrahan and curator Carrie Kibbler.

Belinda Hanrahan says, “This is the most significant and most ambitious project for a regional gallery. It’s a huge undertaking and we know it will bring people from not just Sydney but from regional areas of New South Wales and beyond as it is such a rare opportunity to see this spectacular work from remote central Australia. The works will be in our exhibition space as well as installations in other parts of the gallery and our expansive gardens.”

The media release from Hazelhurst contains a statement from artist Nyurpaya Kaika Burton, from Tjala Arts. She speaks of the significance of the women’s collaborative canvas painted in Kaltjiti in 2016:

(Of course when we come together to work like this as family we are happy.

This story is for all of us, all Anangu.
In this canvas is our story.
We have these stories in our heart and inside us.
This makes us strong.
This is for the next generation, so they can strongly hold the stories like we do.)