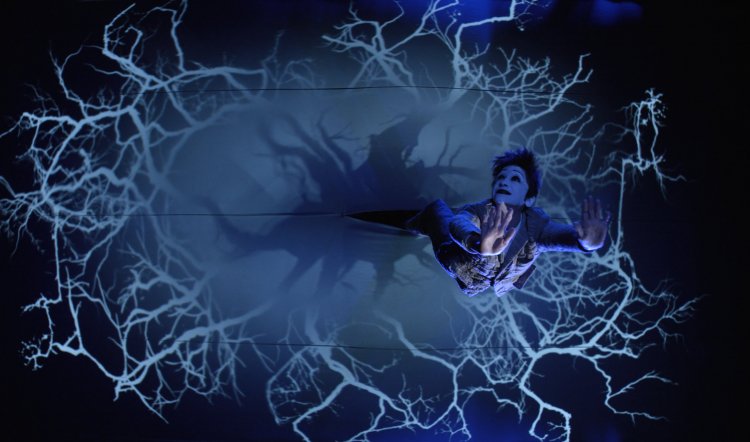 A MIDSUMMER NIGHT'S DREAM: NOT THE MOVIE

On Saturday afternoon (April 1) the Seymour Centre screened Julie Taymor’s stage production of A Midsummer Night’s Dream. It’s been around and waiting for an enterprising artistic director (such as Tim Jones) since late 2013. It was then that it was filmed, over four performances, during its three month season as the inaugural production at the new Polonsky Shakespeare Center in Brooklyn.

Julie Taymor is one of the most exciting creative minds in film and theatre. Famous for The Lion King, infamous for Spider-Man: Turn Off the Dark; lauded for her opera presentations, and also responsible for a handful of luscious movies from Frida to The Tempest. Aside from being in awe of her work from way back, I was looking forward therefore to seeing how she dealt with what is, in my opinion, the most irksome flaw in theatre-filmed-for-the-screen.

The clue to the irk lies in this description of the most prominent theatre-cinema producers NT Live, which reads, “Beautifully filmed in high-definition with multiple camera angles and perfect audio, it really is the next best thing to being there.”

Unless you’re closely related to Kafka’s fly, when was the last time you sat in a theatre and watched the show from “multiple camera angles”? Unless you really are some kind of alien in disguise, are you really able to zap your eye focus into a tight close-up on one actor’s face?

And even if you could, why would you do that and lose sight of everything else that’s going on in the scene? Because a stage play is conceived by its director and actors to be a whole consisting of many facets – but a whole nevertheless.

Theatre is not a movie. And more than that, theatre is not a series of close-ups. Indeed, theatre is not about close-ups at all because the entire stage and the action on it is what we are looking at. And our eyes and ears don't anticipate – as a directed camera inevitably does. Of all people, why didn’t Julie Taymor get that?

Interviewed on website IndieWire, Taymor described her process: “We shot four performances live, with four cameras in different locations surrounding the play, and then for four days we could go onstage and do more single-camera setups: hand-held, Steadicam. The audience was invited; they were watching a movie being made, and that’s where we could get intimate. Then it was edited for 10 weeks like a normal movie. In theater, you’re usually looking at the person who’s talking — and, quite often, the back of the person who’s listening. In the movie, you get reaction shots, and it actually makes the language twice as clear, twice as moving, twice as layered as live theater. That’s why I love Shakespeare on film.”

No, no, no. Unless you suffer from tunnel vision, when watching live theatre your eyes and brain take in far more than “the person who’s talking – and quite often the back of the person who’s listening”. And that’s because very few directors block scenes like movie scenes, so the standard cinema set-up with a back view and a face in focus doesn’t happen.

A stage scene is planned, and actors move, to present a whole that is the sum of its parts; not a selection of parts. In the theatre, “reaction shots” are part of the whole; they don’t get intercut afterwards. Close-ups don’t make “the language twice as clear, twice as moving...” – when it’s a filmed stage performance it’s just the opposite! 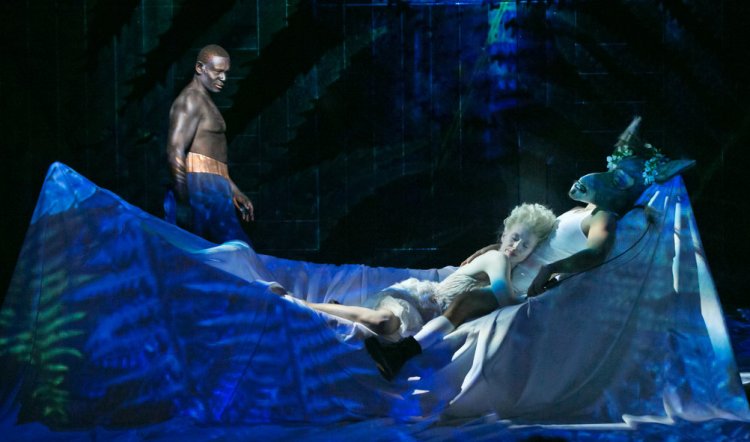 It’s obvious from any recent NT Live or Live in HD from the Metropolitan Opera – for instance – that the directors all think (or wish) they were shooting a movie. In the early days of filming a play for onward transmission, this wasn’t the case. I remember sitting in the dark at the Chauvel and on screen in front of me were the rows of silhouetted heads meaning the camera – and we in Sydney – were in a very good seat in the middle of Row G or H.

The camera pretty much stayed right there – in the centre of the Stalls – and even with its limitations it really was “the next best thing to being there”. Moreover, “perfect audio” meant hearing the murmurs of the audience before the curtain rose and the laughter and other human noise during the performance. It’s a different kind of perfection from the pristine, isolated sound of a movie and rather than detract, it enhanced the sense of live theatre.

That doesn’t happen now, since filmmakers have taken over, and it’s a shame. And it was more starkly obvious than usual during A Midsummer Night’s Dream – a production that utilises every nook and cranny and level of the new Brooklyn theatre (a bigger version of The Reginald or the Opera House Studio with 299 seats) and one where every moment is alive with fabulous, complex action and visuals.

Sitting in that theatre one’s head would have been swivelling constantly and eyes would have been wide as the classic Taymor imagery unfolded around the actors and audience. Instead, watching the screen and its constant zooming in on a morsel of wonderment, all I could think was – what are we missing? What’s happening over there, or there, or there? Knowing full well that everything was happening somewhere else on the stage and we were always running to catch up or try to figure it out.

Ironically, in the 15-minute “making of” doco that ran after the production itself, we were treated to – or further frustrated by – glimpses of those very missing elements. As Taymor talked about her ideas and we saw fleeting moments of how she achieved them, I realised they were moments we had not been privy to during the “live” screening – because of the damn close-ups.

It’s now so much the norm and so irritating I rarely go to the NT Lives (et al) any more: it’s not the next best thing being there, it’s just frustrating. Neither fish nor fowl, neither movie nor theatre. It’s not to say it wasn’t thrilling to see some version of Julie Taymor’s now fabled Shakespeare-in-Brooklyn spectacle. For one thing, Kathryn Hunter’s Puck was brilliantly unforgettable, but it wasn’t anything like sitting in Row H. And neither was it anything like a Taymor movie.

So: theatre live people: put the camera back in Row H and turn on the SurroundSound. Either make theatre or a movie, not a curate’s egg. The end. What do you think?