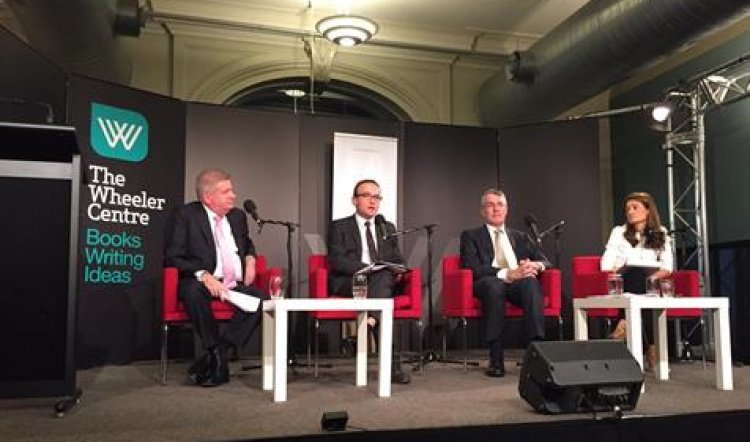 FULL STE(A)M AHEAD TO JULY 2

Friday 17 June 2016 – the National Day of Action for the Arts – is timed to make the public and (it’s hoped) politicians sit up and take notice ahead of the federal election on 2 July. Why is it necessary?

Unless you’ve been overseas or asleep for the past few years you will be aware of the deliberate assault on the arts sector by Government. And by default and disinterest, by the Opposition too. The weapon of choice being economic neglect and malnourishment.

The disinterest (of the Abbott-Turnbull government) was made blindingly obvious at the “Arts policy debate” held at the Wheeler Centre in Melbourne on 8 June. This event, moderated by ABC’s Patricia Karvelas, had the Greens’ arts spokesperson Adam Bandt, Labor’s arts shadow Mark Dreyfus and incumbent arts minister Mitch Fifield on the platform to sell their respective arts policies.

Uniquely, Minister Fifield came to the event without one. His main contribution, aside from defending the Abbott-Turnbull actions to date, was to make an unsustainable motherhood statement that a re-elected Coalition government would, “bring the arts and creative industries to the centre of the Government’s innovation agenda”.

Unfortunately no one had the presence of mind to ask, “How?”

At the time Fifield’s empty policy folder seemed almost comical and not surprising. In retrospect, it was insulting – to Bandt, Dreyfus and the audience – and undemocratic towards the electorate as a whole. (In the 2014 survey by the Australia Council on public participation in the arts, 95% said that in the last year they had engaged with the arts “in some way”, and 85% agreed they believe the arts make life richer and more meaningful.)

Chaos, destruction and division have been the overall result of the most recent and swingeing Abbott-Turnbull cuts to the Australia Council. Coupled with the autocratic Medici-fication of funding with previous arts minister George Brandis’s “Catalyst” pork barrel, the arts sector is in the worst place it’s encountered in decades.

Whether it’s called the arts sector, or the arts industry, the fact is Australia benefits hugely from its arts practitioners of all kinds – big, small, internationally famous and local heroes alike. As a society we can’t do without a healthy, homegrown arts and cultural life.

Relentless parroted propaganda from Abbott-Turnbull, that’s more often than not given the nod by the rest, tells us we can’t afford the arts (nor quality public health, education and infrastructure). It’s dangerous nonsense.

A fair tax system that includes the major and global corporations and big business in general – rather than feather-bedding or subsidising them – would give us more money than could currently be dreamed of. The only obstacles are political will and vested interests.

Both the Greens and Labor have set out their arts policies on party websites. They are worth consideration. In Mark Dreyfus there is a shadow minister who actually seems to care and know something about the portfolio.

In the forthcoming election I’d beg you all to think about your life without the richness of our stories, our pictures, our music and our lives being readily available for us and our children. Couple that with malign indifference towards public health, education and infrastructure and you have the Coalition.

Another kind of indifference is from us all towards the federal voting process and we have to do it just once in four years. Again, I beg you to take the time and responsibility as a citizen to tick all the boxes. Don’t be lazy, don’t be indifferent and don’t cut off your nose to spite all our faces, nor be cynical.

The process and parties aren’t perfect and there are shameful bi-partisan policies being enacted in our names at this moment on Nauru and Manus and elsewhere. But in this instance I believe and hope that we can be in it to win it – all – if we put the arts and our culture back in the centre where they belong and where their effect is greatest. Vote Labor for the Reps and Greens for the Senate and put the Coalition and amoral careerists and hate-mongers (Family First, Hanson, Shooters & Fishers etc) last.

Our future health and wellbeing and that of our children and grandchildren are in jeopardy as never before. Failure to act this time will take generations to repair. It's time, men and women of Australia. No mucking about.