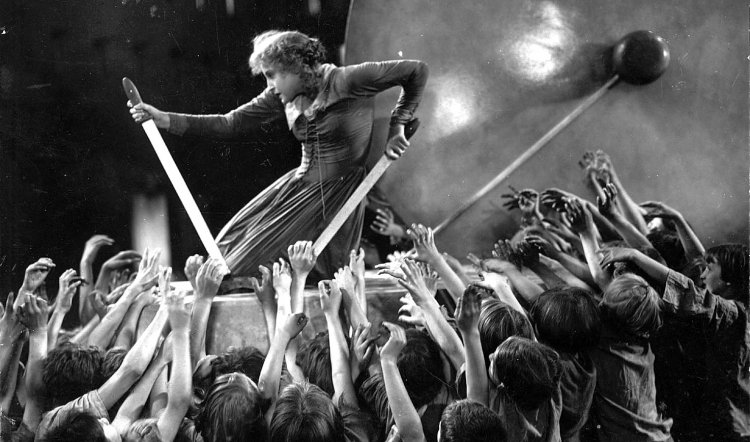 In the image above, from Fritz Lang’s fabled 1927 silent movie Metropolis, we see the actor Brigitte Helm in the role of Maria. She’s a sort of early youth worker who’s brought a mob of children to the city to see how the rich live. Things go horribly wrong and Maria is kidnapped by Rotwang, a mad and ruthless scientist played by Rudolf Kleine-Rogg. He uses her human essence to bring to life Maschinemensch – the first ’droid and C-3PO’s malign great-grandmother.

Nevertheless, portrayed above is the scene where the catacombs beneath the city of Metropolis have begun to flood. The kiddies’ parents have done a runner and the real Maria is banging a huge gong to raise the alarm and try to save the tots from drowning. You can clearly see the difference between nice Maria and evil robotic Maschinemensch Maria, and how totally bonkers Rotwang is because the gruesome pair is seen in the photo below.

But – and it’s a big but – no child was drowned in the making of Metropolis. Brigitte Helm was neither a doe-eyed social worker nor a malevolent aluminium minx, and Rudolf Kleine-Rogg was neither mad nor a scientist. The amazing thing is...they were all acting!

Acting is even more obvious in a scene where, among other hallucinations and Freudian deliriums, Maria performs a dance of extreme sensuality and pouting provocation. She is watched by a mob of society dudes in Brylcreem and white tie and tails and her gyrations drive them into frenzies of lecherous, lascivious lewdness (just underlining the extremes of feeling on view here...)

But – and it’s the second big but of the day – Brigitte Helm hadn’t been sniffing amyl to conjure up the sinuous sexiness and bodily gyrations of her nite club bop. The male extras of the ravening horde didn’t feel her up, mutter bons mot about her genitals or their fragrance. Once again, and amazingly... they were all acting! 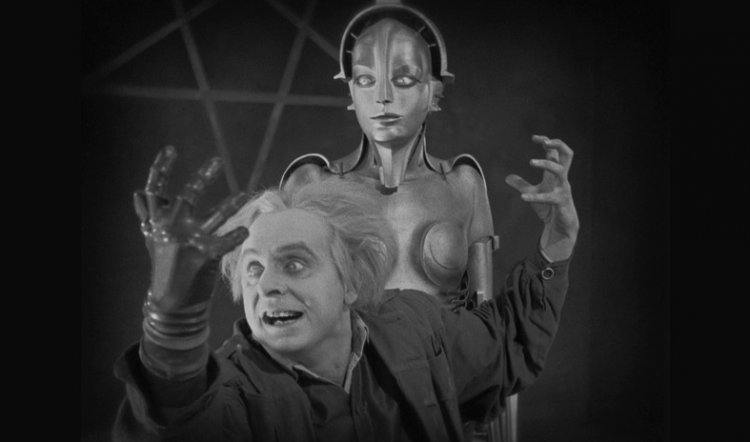 Just to make it absolutely clear, acting is the thing actors do when they’re working. When they are working, they pretend to be something (robot, bright green ogre, cowardly lion) or someone (mad scientist, homicidal American president, 1920s vamp, sweet transvestite from Transsexual, Transylvania) in order to entertain an audience. Because they are skilled, talented, highly trained professionals, actors do all these things in the full knowledge that it is make believe and they are not expected to carry out the actions of their characters for real.

And it’s no good saying, “Ah, but what about Stanislavski? What about The Method?” (Konstantin Stanislavski being the Russian who came up with acting as “the art of experiencing” – rather than what he saw as mere representation.) Trouble is, the Method was taken to extreme extremes of “realism” by Lee Strasberg and can easily be interpreted by groping, egotistical opportunists as immersing oneself in one's character’s feelings, motivations and actions and to hell with everyone else.

But – third but coming up – throughout his career as actor and director, Stanislavski made sure to subject his work and motivations to the most rigorous process of self analysis and self reflection. It’s a crucial difference ignored by the molesters and scene-hoggers.

Aye – there’s the rub. Take the disingenuous nonsense of dramatic verisimilitude to its logical conclusion and the rub is obvious, as Hamlet might have said. Let’s face it, in Hamlet, the old king is dead before curtain-up, Ophelia drowns, Polonius is stabbed to death through the drapes, Rosencrantz and Guildenstern are not only dead but murdered by the English king, Gertrude is poisoned by wine meant for Hamlet; Claudius is first stabbed by Hamlet and then, to make absolutely sure of it, is forced to drink more poisoned wine; Laertes is done in with a poisoned sword tip and, tit for tat, Hamlet is the final body to be added to the massacre after being stab/poisoned by Laertes.

And for women on stages and film sets, think of Lady MacB’s question about how to live one’s life: “Art thou afear’d to be the same in thine own act and valour as thou art in desire?”