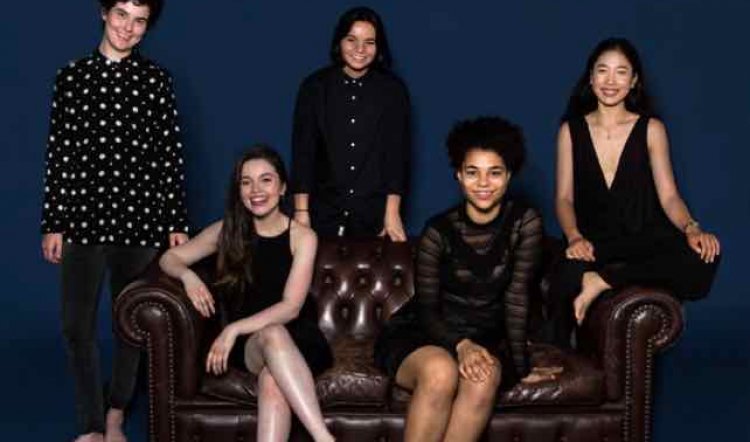 THE WINNERS ON THE NIGHT

Okay, it’s Thursday and I’ve just woken up. Because it was a sizzling Monday night in the Everest Theatre at the Seymour Centre for the Sydney Theatre Awards presentation for 2017. The place was packed to the rafters with whooping and expectant theatre people from all over. Missing from the crowd unfortunately was the Muriel’s Wedding the Musical crew: on stage at the Ros Packer for their Monday performance (what? Monday? Since when?)

A pity because the biggest and best new Australian musical in ever won seven STAs: Best Mainstage Musical for Global Creatures and Sydney Theatre Company, Best Direction of a Musical for Simon Phillips (absent in Melbourne getting the Priscilla bus back on the road). Madeleine Jones won Best Female Actor in a Supporting Role, while Muriel herself – Maggie McKenna – was co-winner of Best Newcomer (with Zoe Terakes of A View From The Bridge.)

As Carmen Pavlovic of Global Creatures raced back and forth picking up the Muriel awards and gift bottles of wine (courtesy of STA’s new sponsor Ipoh-QVB), she found time to mention that at another awards show a commercial musical producer sneered that Muriel would never make it and the idea of a commercially viable Australian musical was nonsense.

This week it was announced that the sold-out, smash hit Muriel’s Wedding the Musical will have a return season and talks are ongoing for further runs here and overseas. The cast album is also galloping up the charts. Tra la.

However, with various wins for Assassins, Only Heaven Knows and Calamity Jane (including Virginia Gay’s Judith Johnson Award for Best Performance by a Female Actor in a Leading Role in a Musical) the Hayes Theatre Co and its co-producers again played an extraordinarily significant role in Sydney and beyond. Amazing.

The other “big” success was Belvoir’s blackest, wildest and most heart wrenching comedy, Taylor Mac’s Hir. Director Anthea Williams took home one of four awards and pushed her star Helen Thomson forward to receive the company’s Best Mainstage Production award. The startled Thomson ’fessed up to being bewildered when she first read the extraordinary script, “I couldn’t tell whether it was brilliant or total shit,” she graciously admitted. “I asked my husband what he thought and he said, ‘say yes’.”

And it was a good year for Bell Shakespeare Company. The outstanding performances of Kate Mulvany as the eponymous Richard III and Mitchell Butel as Shylock in The Merchant of Venice were both recognised with Bests in the Mainstage category.

The reviewers of the STA group (me, Elissa Blake and Jason Blake of Audrey Journal, Dee Jefferson of ABC Arts, Deborah Jones of The Australian, Jo Litson of Limelight magazine and the Sunday Telegraph, John McCallum of The Australian, Ben Neutze of Time Out, Cassie Tongue of Guardian Australia and Time Out, and Suzy Wrong of Suzygoessee) continue to be wowed by the strength of Sydney’s Independent Theatre sector.

In particular, the still newish KXT-Bakehouse at the top of the Cross and in even more particular, Red Line Productions at the Old Fitz which gave us some brilliant theatre, especially A View From The Bridge which took home won four awards including Best Independent Production for which Andrew Henry made one of several of the night’s impassioned and inspiring speeches. (Kate Mulvany’s was another.) Directors Kate Gaul and Anthony Skuse also made notable contributions to the sector with nominations and wins in various categories for The Ham Funeral and The Trouble with Harry (Gaul) and 4:48 Psychosis (Skuse).

Elissa Blake delivered a warm citation for our Special Award to Monkey Baa Theatre. Its three founders, Eva Di Cesare, Sandra Eldridge and Tim McGarry met over coffee twenty years ago and have made an extraordinary contribution to the theatrical lives of children and young people ever since. (Di Cesare was absent in the USA, overseeing yet another opening of their global smash hit Diary of a Wombat.)

John McCallum heroically tried to stall revealing the identity of the recipient of the Lifetime Achievement Award, but it was impossible. Brian Thomson’s glittering 40-year design career began with the very first Rocky Horror Show, has taken in the West End and Broadway and continues today with Priscilla, Queen of the Desert and Opera Australia’s Carmen on the harbour; and virtually everyone in the room had worked on one of his sets.

The Lifetime Achievement Award is now sponsored by the Actors Benevolent Fund of NSW and the organisation will, “provide a grant of $1500 in the name of the Award winner each year to financially assist a needy student during the toughest time of any course – the second year – so they can better concentrate on the heightened demands of study which happen in that year.”

The Brian Thomson winner was NIDA acting student Jaz Laker. A surprise announcement came from Brian Thomson (who also made a gracious and wide-ranging speech) when he pledged to match the award, making a total of $3000 towards the winner’s continuing education. Wow.

In another new initiative, our very own Suzy Wrong and her company Tickets Tonight, sponsored and produced a souvenir program for the evening. It featured a Vanity Fair-style cover image of all the nominees in the Best Newcomer category. It’s reproduced above  and is remarkable in that the equivalent of herding cats was accomplished in getting them all together at the same time, in the same place and facing in the right direction.

Zoe Terakes caused some of the biggest gasps and whoops of the evening when she thanked her fellow actors and director Iain Sinclair of A View From The Bridge for not only supporting her through her first ever adult role but also through her HSC. (She was still a SCEGGS Darlinghurst student in 2017!)

And finally, a bucket collection on the night – intended as seed funding towards mental health needs for members of the industry – resulted in a generous $1170.20 (every cent counts) in buckets rattled by me, Kate Mulvany and Isabella Tannock. It will be administered by the Actors Benevolent Fund of NSW – and if you’d like to donate, the ABF website gives the details: www.actorsbenevolentfund.org.au.

Here’s the full list of winners. Congratulations to everyone, see you next year. Chookas for 2018. 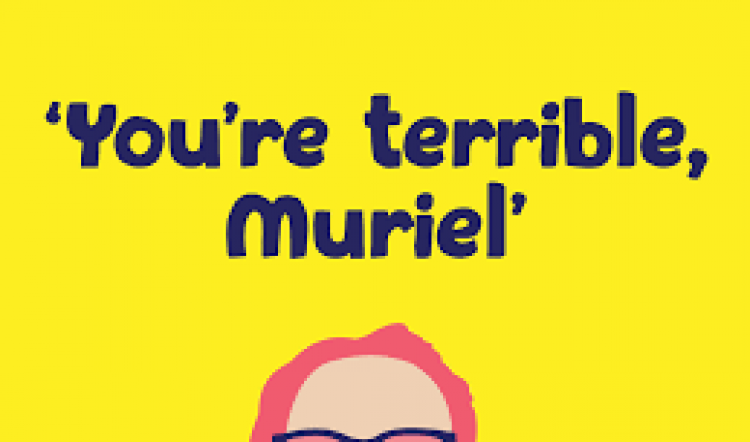 BEST MALE ACTOR IN A LEADING ROLE IN A MAINSTAGE PRODUCTION: Mitchell Butel (The Merchant of Venice)

BEST MALE ACTOR IN A LEADING ROLE IN AN INDEPENDENT PRODUCTION: Ivan Donato (A View From the Bridge)

BEST FEMALE ACTOR IN A SUPPORTING ROLE IN A MAINSTAGE PRODUCTION: Elaine Crombie (Barbara and the Camp Dogs)

BEST FEMALE ACTOR IN A SUPPORTING ROLE IN AN INDEPENDENT PRODUCTION: Zoe Terakes (A View From the Bridge)

BEST MALE ACTOR IN A SUPPORTING ROLE IN AN INDEPENDENT PRODUCTION: Johnny Nasser (The Ham Funeral)

BEST SOUND DESIGN OF A MAINSTAGE PRODUCTION: The Sweats (Chimerica) 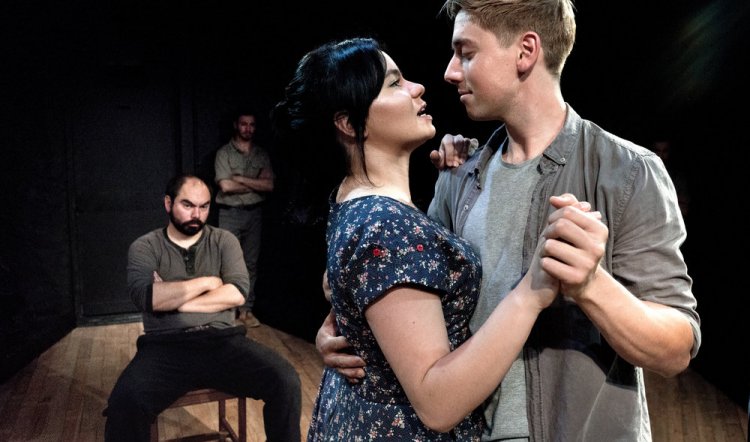 JUDITH JOHNSON AWARD FOR BEST PERFORMANCE BY A FEMALE ACTOR IN A LEADING ROLE IN A MUSICAL: Virginia Gay (Calamity Jane)

JUDITH JOHNSON AWARD FOR BEST PERFORMANCE BY A MALE ACTOR IN A LEADING ROLE IN A MUSICAL: David Campbell (Assassins)

BEST PERFORMANCE BY A FEMALE ACTOR IN A SUPPORTING ROLE IN A MUSICAL: Madeleine Jones (Muriel’s Wedding)

BEST PERFORMANCE BY A MALE ACTOR IN A SUPPORTING ROLE IN A MUSICAL: Matthew Backer (Only Heaven Knows)

SPECIAL AWARD: Eva Di Cesare, Sandra Eldridge and Tim McGarry of Monkey Baa Theatre Company for two decades of extraordinary theatre for children and young people in Australia and around the world.