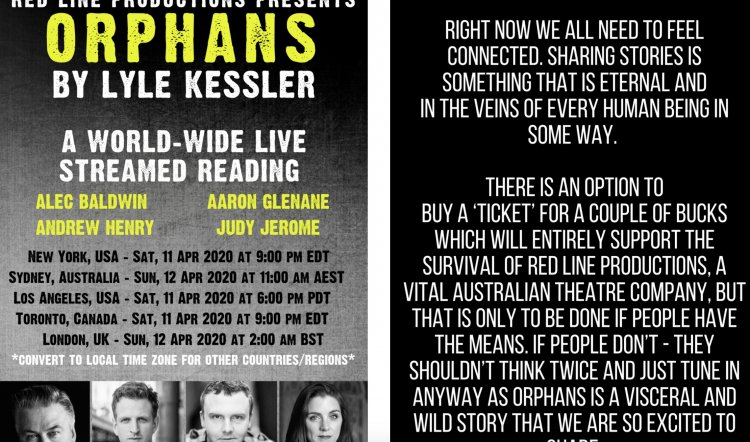 Now here's a thing: a play reading whose performers are all over the world. Lyle Kessler's Orphans is to get the treatment on Sunday, 11 April at 11am – for anyone in Sydney or on east coast time. And, as you can see from the poster above, New York, LA, Toronto, and London peeps may also turn up.

Dating from 1983 when it premiered in Los Angeles, Orphans was then a huge success for Chicago's Steppenwolf company, before London and the world. It's about two adult orphan brothers, Treat and Philip. They live in a broken-down house in Philadelphia. Treat "takes care" of his younger brother by thieving to keep them alive and fed.

Philip never leaves the house because he thinks he might die of something or other if he goes outside. He tries to make sense of the world by watching re-runs of The Price Is Right. He's not a well fellow. Treat kidnaps a gangster named Harold who is also an orphan and a lot better at crime than Treat. The two brothers find themselves being cared for by Harold, on the other end of his gun.

Father-son relationships, the contagions of a brutish outside world, the longing for love and a mother are among the themes that many in the time of COVID19 will recognise. And if you're experiencing a bit of deja vu: long-time RedLiners may remember Orphans from the 2015 production: directed by Anthony Gooley, with Danny Adcock, Aaron Glenane and Andrew Henry.

Whatever: set aside your bread-baking, Zooming, reading, and binge-watching,. give the dog a break from endless walks and get your tickets to this unique live-streaming theatre event.