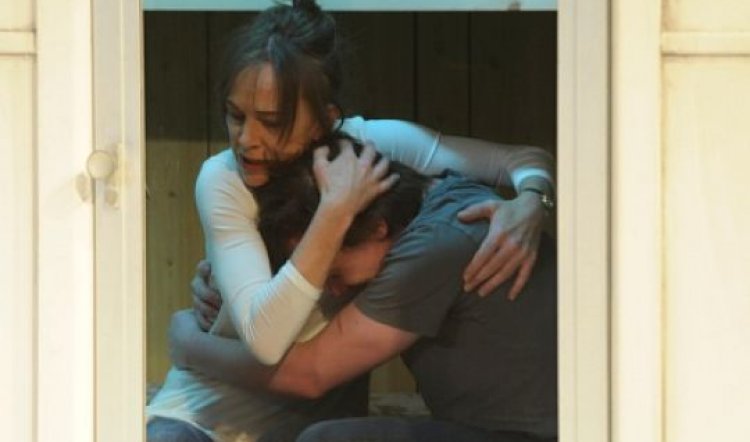 THE SEAGULL by Anton Chekhov in a version by Benedict Andrews. Upstairs Theatre, 4 June -17 July 2011. Sold out. Standing room tickets released at 9.30am on the day (2.30pm Sundays) for all performances. These tickets only available in person from the Box Office and are limited to two per customer. Photos by Heidrun Lohr

In his program notes, director and adapter Benedict Andrews writes of time being the crucial element in Chekhov’s plays; place too. All The Seagull’s characters yearn to be elsewhere; time hangs heavy in the air – they almost suffocate in the thickness of it, no matter whether it’s winter or summer – and both are unbearable in bucolic pre-Revolutionary Russia. Andrews also reminds the reader of Patrick White’s observation, in The Prodigal Son, that “… in all directions stretched the Great Australian Emptiness, in which the mind is the least of possessions …” It’s quickly clear that these two ideas form the foundations of the production and they meld seamlessly, despite being a century and half a world apart.

Long acknowledged as one of Chekhov’s four great plays, The Seagull was described by him as a comedy; and it is – in a bittersweet Russian fashion. If bananas had been widely available on the threadbare country estates of the Russian bourgeoisie, it’s likely he would have written a scene where the most serious character slipped on the skin of the fruit; it’s that kind of comedy – where the hilarity of existential despair will inexorably lead to someone topping themselves before the final curtain. Perhaps it’s that febrile quality that makes the oxygen-starved and aimless household so funny and so painful. It’s definitely what makes Judy Davis the logical, brittle, awful and wonderful heart of the piece.

As Irina Arkadina, the actress of un certain age, heart-stopping fragility and stainless steel ego, Davis is simply magnificent; wickedly, comically, tragically magnificent. And she can be magnificent because she is surrounded by actors in whose company she can be exactly the monstrous child-woman she has to be without fear of falling or, worse, crushing the life out of them. First among equals is Bille Brown – sad, solid doctor Yevgeny Dorn – who yearns for his lost youth, Bruce Springsteen and the effect he used to have on women. When Irina flirts with him still it warms them both and they know the gentle heat is all that is left.

That poignant truth is of no comfort to Polina Shamrayev (Anita Hegh). She loves the doctor to distraction and beyond because he is everything her estate manager husband Ilya (Terry Serio) is not. That Ilya is a simple, rough bloke with no airs or pretensions – because Dorn has them all – matters not a jot to Polina and she cannot – will not – see the hopelessness of her passion and the hopelessness of the doctor’s innate weakness. Everything she does in her mundane days: folding clothes for ironing, watching, watching and inwardly furious, is done with such barely suppressed rage she seems to teeter between implosion and miserable collapse.

Unrequited and hopeless love is also the raison d’etre of Irina’s brother, Pyotr Sorin, (John Gaden). He wants only to live in the city – and is doomed to live out his declining days on the estate; he wanted to be a writer – and never quite got around to it; and he wanted to love and be loved – and never achieved that either. He conducts a waspish war of words of attrition with the doctor and occupies a position in the family rather like Eeyore: his tail hasn’t fallen off yet, but he fears it soon will and keeps checking to see whether his fears have been realised while he was otherwise distracted.

The other men present in Irina Arkadina’s life are her son, the fledgling playwright Konstantin (newcomer to Belvoir Dylan Young); and her current lover, successful writer Aleksei Trigorin (David Wenham). Konstantin – Kolya – deeply resents Trigorin’s success and his carefully dismissive attitude towards it. His faintly smiling superciliousness, as he scribbles important thoughts in his Moleskine is a sly opposite to Kolya, who is young, naïve and wildly wide-eyed to an exasperating degree. Kolya has written an experimental, avant garde play which he inflicts on his mother and the rest of the house party in the garden, by the lake, on an otherwise perfect summer evening. 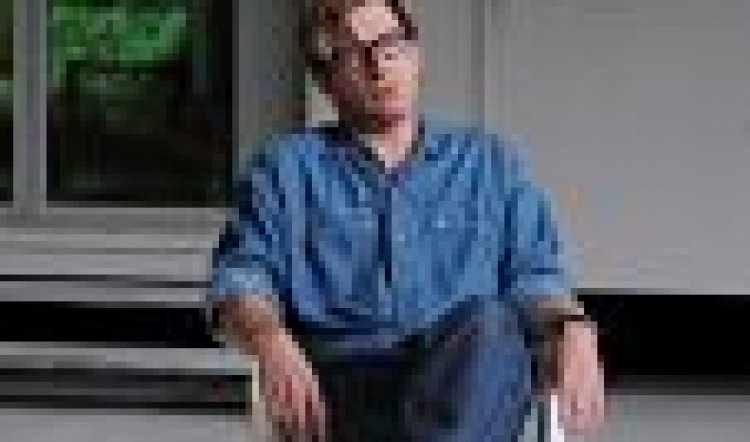 As befits his awkward stage in life, Kolya has had a successful sense of humour bypass and everything he touches turns to ponderous earnestness. It’s painful to watch and hear and Irina has no stomach for it at all; their interactions are the core of the play’s humour and reason for the groans of recognition from a particular cohort of mid-life women in the audience. The groans turn to titters and barely stifled guffaws – on stage and in the rest of the room – when Kolya’s play is revealed.

In this production it really is revealed: a large boxlike shape covered by a black drape occupies the centre of the stage/front yard of a basic demountable shack that, in its L-shape, follows the lines of Belvoir’s unique stage and reveals to all the kitchen, living area and bunk bedrooms. It’s absolutely not Vogue Living and everything about it has seen better days – none of them fashionable. (Set by Ralph Myers and lighting by Damien Cooper.) Under the drape is one of Benno’s favourite devices for incarcerating actors to greater effect: a very large clear Perspex box (think Who’s Afraid of Virginia Woolf and Measure For Measure). In this instance it’s Kolya’s theatre and in it, his love object Nina Zarechnaya (Maeve Dermody), a gorgeous young thing from a house across the lake, is set to perform the monologue-play.

Whether or not Nina is a good actress – and, of course, she has ambitions to go to Moscow and become one – is impossible to tell as the “play” is excruciating; and it’s hard to distinguish between Kolya’s passion for it and his adoration of Nina. And as Arkadina asks, in one of her many highly theatrical asides, “Does it have to be so loud?” Dermody’s tremulous blondeness and sweet hunger for escape and life – and inability to love Kolya with anything like reciprocal enthusiasm – are a beautifully matched contrast to Polina’s darkly scowling daughter Masha (Emily Barclay), who is all grumpy Goth to Nina’s angelic zeal. Masha, of course, is hopelessly in love with Kolya and Kolya cares not a jot for her affection. The nerdy school teacher Medvedenko (Gareth Davies is in love with Masha and she cares not a jot for him. Yet when Nina, in her turn, falls for the urbane Trigorin and he quickly begins to unravel his attachment to a suave demeanour and older lover in favour of the teenager, the stage(s) are set for various disasters and much disbelieving laughter.

The Seagull is set across four acts and two halves and during the interval, two years pass and a stark change of gear occurs. Sweet and sour froth and bubble give way to encroaching darkness as the second half knits together the inevitable outcomes of all this unsuitable, impossible and spurned love and thwarted ambitions. The froth of comedy is swept away in the steadily falling sleet to reveal the bare bones of human hopes and endeavour. As imagined by Andrews and his creative team and realised by this great cast, The Seagull fulfils every hope and dream of theatregoers: to be transported, to be provoked, moved, made to laugh and cry; and to look into the mirror that Chekhov unflinchingly holds up to us all. And in the generosity and spontaneity of her exhilarating, cerebral, bold and wickedly subtle performance, Judy Davis underlines, yet again, that she is truly one of the greats and first among equals.